The VERIFY Team is working hard to make sure you have the facts before you cast your ballot for the November election. 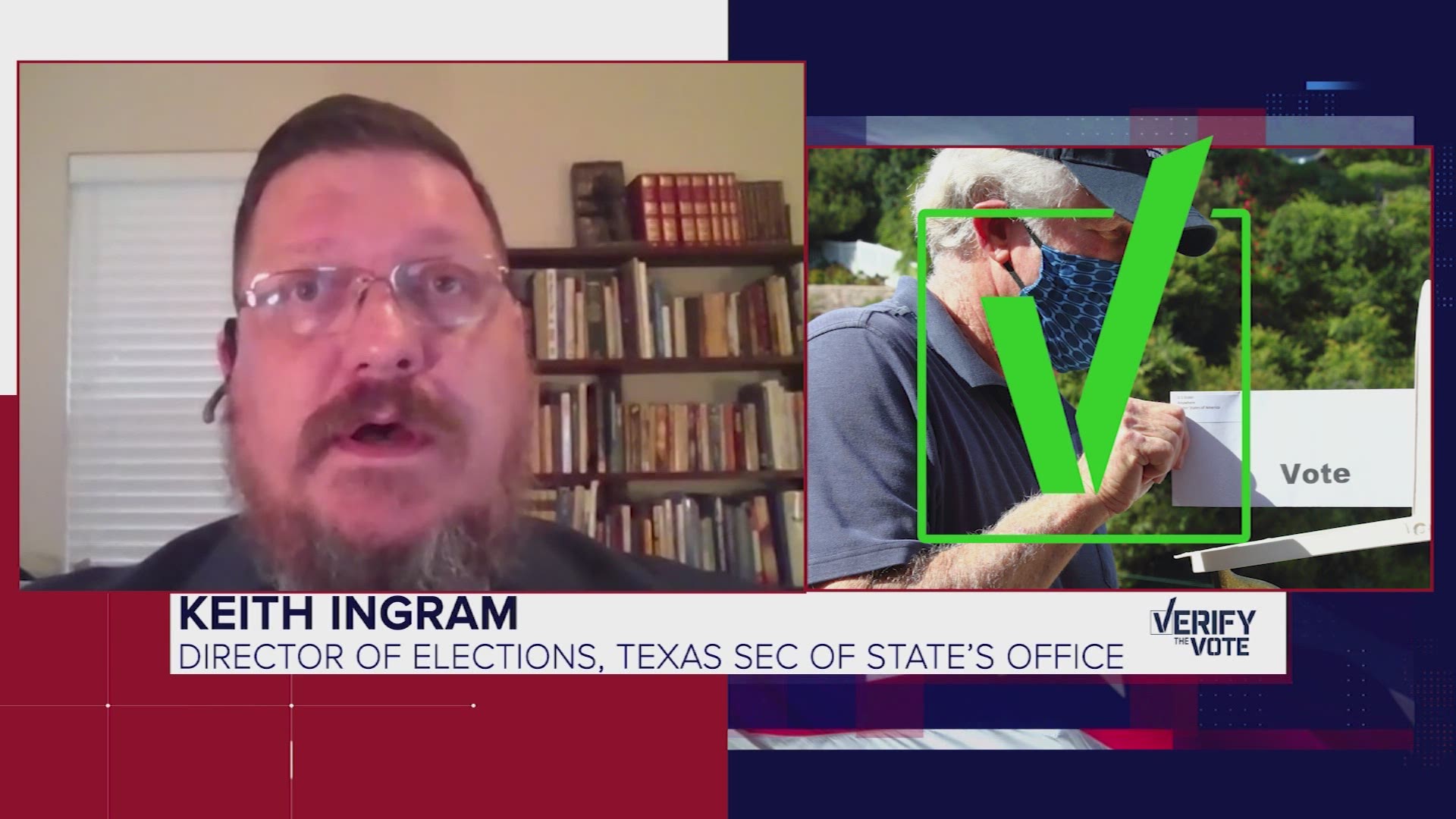 HOUSTON — With less than two months to go until Nov. 3, the VERIFY team is working hard to make sure you have the facts before you cast your ballot for the November election.

The Director of Elections for the Texas Secretary of State’s Office, Keith Ingram, is responding to questions and claims about absentee voting.

CLAIM: I signed up to vote by mail. However, I don't trust mailing my ballot anymore. I can vote in person instead.

TRUE: “You can take your mail ballot to an early voting location. You can surrender that mail ballot and vote in person," Ingram said.

CLAIM: If someone chooses to mail in their ballot and they die before Election Day, their vote will still count.

TRUE: “If they mailed in their ballot before they passed away, then that vote will count," Ingram said.

CLAIM: A person can vote by mail, then vote again at the polls on Election Day.

FALSE: "You cannot vote more than once in an election," Ingram said.

CLAIM: My signature on my absentee ballot will be matched to make sure it's really mine.

TRUE. "Your signature on your application for voting by mail as well as your the one you carry will be compared to make sure that they are made by the same person. In addition, the election office will have up to six years of signatures that they can refer to to confirm that you are the same person," Ingram said.

CLAIM: I can change my vote after I put my ballot in the mail.

CLAIM: If you voted by mail during the last election, you don't have to request an absentee ballot this time around. It will be sent to you automatically.

DEPENDS: “If you checked an annual application, if you're over 65 or disabled, then you will get all ballots that you're entitled to for the year. If you did not if you were out of the county or confined in jail, is your reason for voting by mail, you will need to apply again if you want to vote by mail again," Ingram said.

CLAIM: My vote will count if I forget to seal my ballot in the security envelope.

TRUE: “It's better to have it sealed in the security envelope. But if it's inside the carry envelope, and the signatures are confirmed, then that will be counted," Ingram said.

CLAIM: Anybody can vote early by mail.

FALSE: “In Texas, you have to have a reason to vote by mail. You have to be over 65, disabled, out of the county during the entire early voting period, on Election Day or confined in jail and otherwise eligible to vote," Ingram said.

CLAIM: I have to vote in the main election by mail to qualify for a mail-in ballot.

CLAIM: When you request a mail-in ballot, is it true that your party affiliation is listed on the front of the island below?

DEPENDS: “In a primary election, they put the party affiliation on the outside of the envelope so that they know which ballot board to send it to, either for the Democratic primary or the Republican primary. In the general election, there is no such notation," Ingram said.

If you have something you'd like fact-checked by our VERIFY team, send us an email at verify@khou.com or fill out the form below.