The nation's first primary of 2018 is underway here in Texas, and many believe how we vote will be a gauge for the rest of the country. 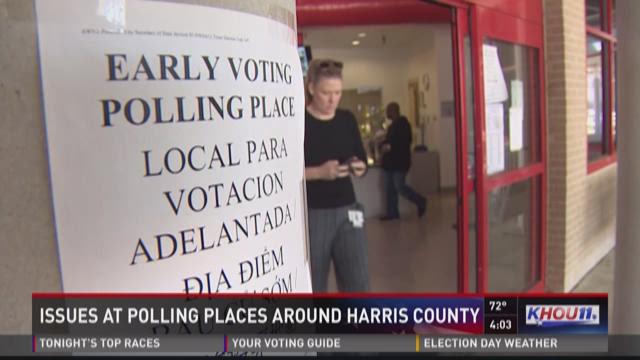 HOUSTON – The nation's first primary of 2018 is underway here in Texas, and many believe how we vote will be a gauge for the rest of the country.

However, some voters have been running into problems. At the Montie Beach Park Community Center in the Heights, they had quite a few problems earlier.

Things are back up and running as of lunchtime but officials said the issue boiled down to a problem with the connectivity. When poll workers got to the site Tuesday morning, they had an issue with booting up the machines, and it resulted in a lot of folks leaving and not casting their ballots.

Now this is nothing new – each election there seems to be some sort of issue at the polling places.

Across voting precincts like the one at Old Spanish Trail and Kirby, they implemented a new hi-tech approach to get folks checked in which used iPads instead of the manual polling books.

However, it created some problems. Some of it had to do with network issues, but others had to do with operators at the precincts not understanding the process to get the iPads working.

As you can imagine, this created quite the headache for voters and candidates like Sylvia Garcia, who happened to vote at the Old Spanish Trail site, say this is a major issue.

“I’m fine with new technology, but it's gotta work, I hope that they tested it. I'm not sure that they did, but these are some of the questions we'll be asking. This isn't over because what happened this morning is totally unacceptable," she said.

Harris County Clerk Stan Stanart said around 10 locations were having problems out of more than 750, which is about double for regular governor cycle.