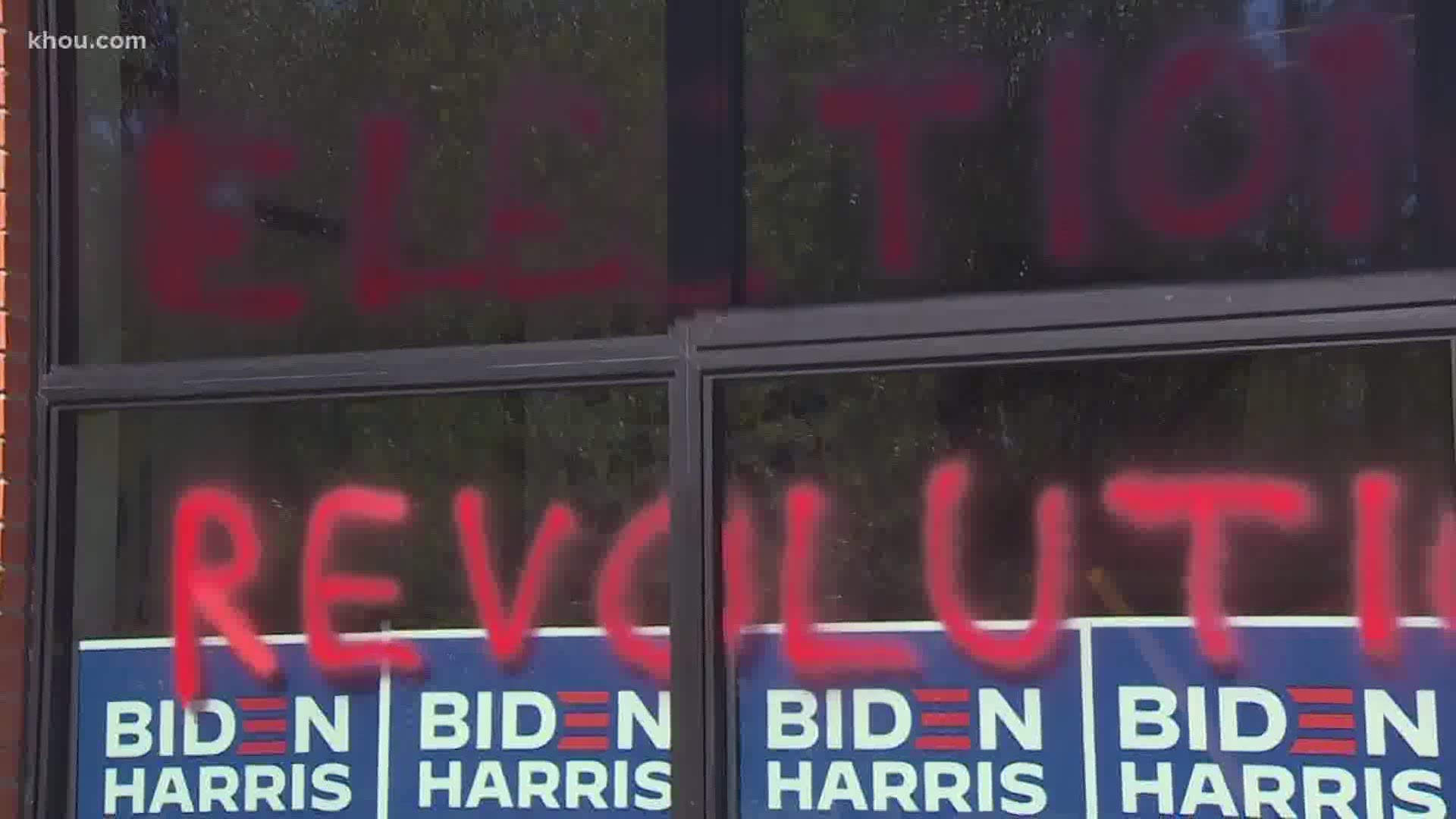 HOUSTON — According to the Harris County Democratic Party, workers arrived at their headquarters early Monday to find out it was vandalized.

Photos sent in from the Harris County Democratic Party show red spray paint was used to write “Election No, Revolution Yes"  with a drawing of a hammer and sickle symbol across the front of the building. The front door was also covered in red paint.

The Harris County Democratic Party said the vandals also put superglue in the locks so the office could not be entered.

The Houston Police Department is investigating this scene. Police said witnesses reported they saw at least four people spray painting the building at about 7:30 a.m. Monday.

HPD said they are looking for surveillance video and/or photos so they can try to identify those responsible. Anyone with information on this vandalism is urged to call their local police department or Crime Stoppers at 713-222-8477.

This comes a day before Election Day, with tensions being high across the U.S. as voters anticipate our next president.

Just a few days ago, officials for the Travis County Democratic Party and other Democratic leaders said an incident occurred during a caravan on Interstate 35 to Pflugerville led by a bus carrying Biden’s name and logo in which a staffer’s car was damaged. The damage, they said, occurred by Trump’s supporters who targeted the caravan

"Instead of promoting their own candidate, they harass and intimidate," said U.S. Rep. Lloyd Doggett (D). "I think we have to stand up to bullies like this just as we try to vote out and ensure every Texan has an opportunity to vote out the bully in chief, which is President Trump."

In a tweet Sunday, President Trump said "these patriots did nothing wrong."

RELATED: 'These patriots did nothing wrong' | Trump responds to FBI investigation into Biden caravan incident

In my opinion, these patriots did nothing wrong. Instead, the FBI & Justice should be investigating the terrorists, anarchists, and agitators of ANTIFA, who run around burning down our Democrat run cities and hurting our people! https://t.co/of6Lna3HMU

The Biden campaign released a statement saying, "Rather than engage in productive conversation about the drastically different visions that Joe Biden and Donald Trump have for our country, Trump supporters in Texas instead decided to put our staff, surrogates, supporters and others in harm’s way."

The Federal Bureau of Investigation (FBI) in San Antonio is investigating this incident as well as the Texas Department of Public Safety.