Officials said a Biden campaign staffer's car was damaged by Trump supporters who targeted a caravan to Pflugerville. 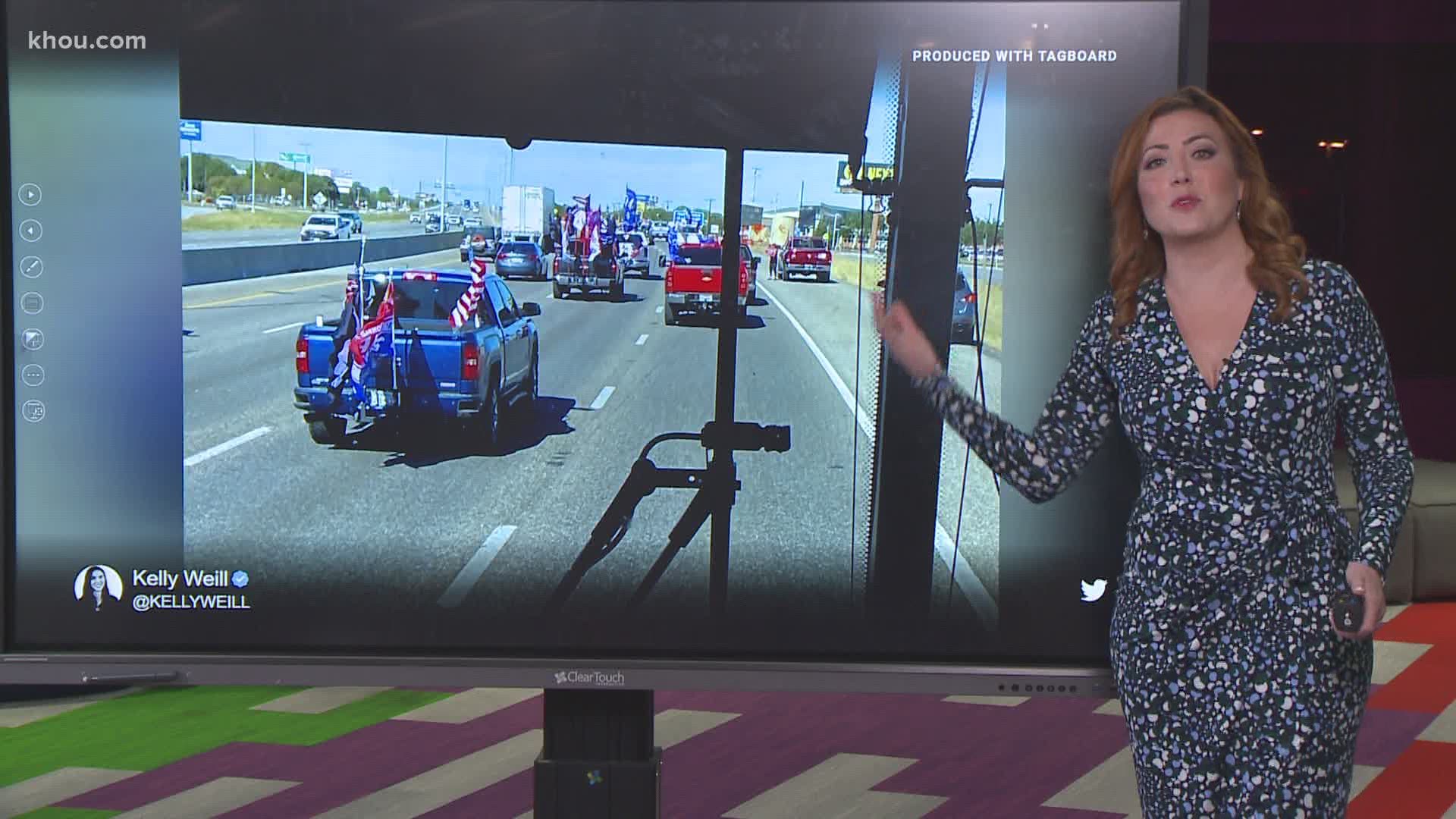 PFLUGERVILLE, Texas — Organizers of a Democratic party rally set for Friday night in Pflugerville abruptly canceled the event after they said supporters of presidential candidate Joe Biden faced harassment from supporters of President Donald Trump while on the way to Central Texas.

"Instead of promoting their own candidate, they harass and intimidate," said U.S. Rep. Lloyd Doggett (D). "I think we have to stand up to bullies like this just as we try to vote out and ensure every Texan has an opportunity to vote out the bully in chief, which is President Trump."

Officials for the Travis County Democratic Party and local Democratic leaders said an incident occurred during a caravan on Interstate 35 to Pflugerville led by a bus carrying Biden’s name and logo in which a staffer’s car was damaged. The damage, they said, occurred by Trump’s supporters who targeted the caravan.

"We don't need this kind of thing. We're going to win this election and we need an atmosphere of trying to heal our country and bring it back together," said Doggett.

According to the San Marcos Police Department, officers received a call from the Biden-Harris bus as they were on I-35 to request a police escort through San Marcos. Three officers responded, but due to the amount of traffic from an unrelated crash, they weren't able to catch up to the bus before it left the San Marcos jurisdiction.

A Biden-Harris staffer later called the Kyle Police Department to report a vehicle incident on I-35 near exit 213, SMPD said.

A video posted on social media partially captured the encounter. It did not show how the collision began.

"Available video footage makes it appears as though the at-fault vehicle may be the white SUV and the victim appears to be the black truck, as supported by a Kyle police report," the department said.

As of Monday morning, SMPD is still working with the FBI on this investigation.

Officials said they canceled the rally, which was set to mobilize young voters and allow local and state candidates to speak, “out of an abundance of caution.” It was not immediately clear where a staffer’s car was damaged or if law enforcement was notified or is investigating. Party officials on social media posted pictures of a damaged white vehicle.

"I think that there's probably a good chance that some criminal charges might be filed," said Rick Flores, a criminal defense attorney and former prosecutor.

Flores said, in his expert opinion, he doesn't see the incident as an accident.

"I think what happened is intentional. And at the least, it's reckless," Flores said. "Luckily for not only the people involved on the Biden bus but also lucky for the people flying the Trump flag, I think everybody's lucky that something worse didn't happen. If there was actually injury to any of the persons involved, then we'd be looking at a felony."

On Saturday, evening the Austin Police Department said it did not respond to the incident, which it said happened outside the department's jurisdiction, according to preliminary information. The Austin Police Association said the crash happened by exit 210 in San Marcos, not in Austin, and San Marcos police, Texas Department of Public Safety or county or federal agencies would investigate, not Austin police.

APD is aware of videos circulating online, where a crash occurred in close proximity to a campaign bus. APD officers did not respond to this incident and is not currently investigating this matter. Preliminary information suggests the crash occurred outside of our jurisdiction.

KVUE has confirmed the Federal Bureau of Investigation (FBI) in San Antonio is now investigating.

On Sunday, President Trump responded to KVUE and Austin-American Statesman reporter Tony Plohetski's tweet about the investigation saying, "In my opinion, these patriots did nothing wrong. Instead, the FBI & Justice should be investigating the terrorists, anarchists, and agitators of ANTIFA, who run around burning down our Democrat run cities and hurting our people!"

In my opinion, these patriots did nothing wrong. Instead, the FBI & Justice should be investigating the terrorists, anarchists, and agitators of ANTIFA, who run around burning down our Democrat run cities and hurting our people! https://t.co/of6Lna3HMU

The Texas Department of Public Safety confirmed it will also be investigating.

“Rather than engage in productive conversation about the drastically different visions that Joe Biden and Donald Trump have for our country, Trump supporters in Texas instead decided to put our staff, surrogates, supporters and others in harm’s way. Our supporters will continue to organize their communities for Joe Biden, Kamala Harris and Democrats up and down the ballot, and to the Texans who disrupted our events today: We’ll see you on Nov. 3.”

On Saturday evening, President Trump also tweeted a video of the caravan driving alongside the bus, saying, "I LOVE TEXAS!"

Jennifer Ramos, president of the Austin Young Democrats, who helped organize the event, said, “It is disappointing our opponents are resorting to violence. We will not be deterred.”

State Rep. Sheryl Cole tweeted an apology to those looking forward to the event, saying in part, "Pro-Trump Protesters have escalated well beyond safe limits."

The event was scheduled to be held at a Pflugerville ISD facility at 7 p.m. Friday.

This is a 1st for me - but we just cancelled a joint event in Pflugerville w/ @JoeBiden campaign, @AustinYoungDems, & more, due to security reasons. Unfortunately, Pro-Trump Protestors have escalated well beyond safe limits. Sorry to all who looked forward to this fun event. https://t.co/tSq4moqro0

VERIFY: Austin is not 'one of the most dangerous cities in America,' as Lt. Gov. Dan Patrick claims

PREVIEW: Texas Longhorns travel to Stillwater to square off with No. 6 Oklahoma State

When do early votes and mail-in ballots start getting counted?