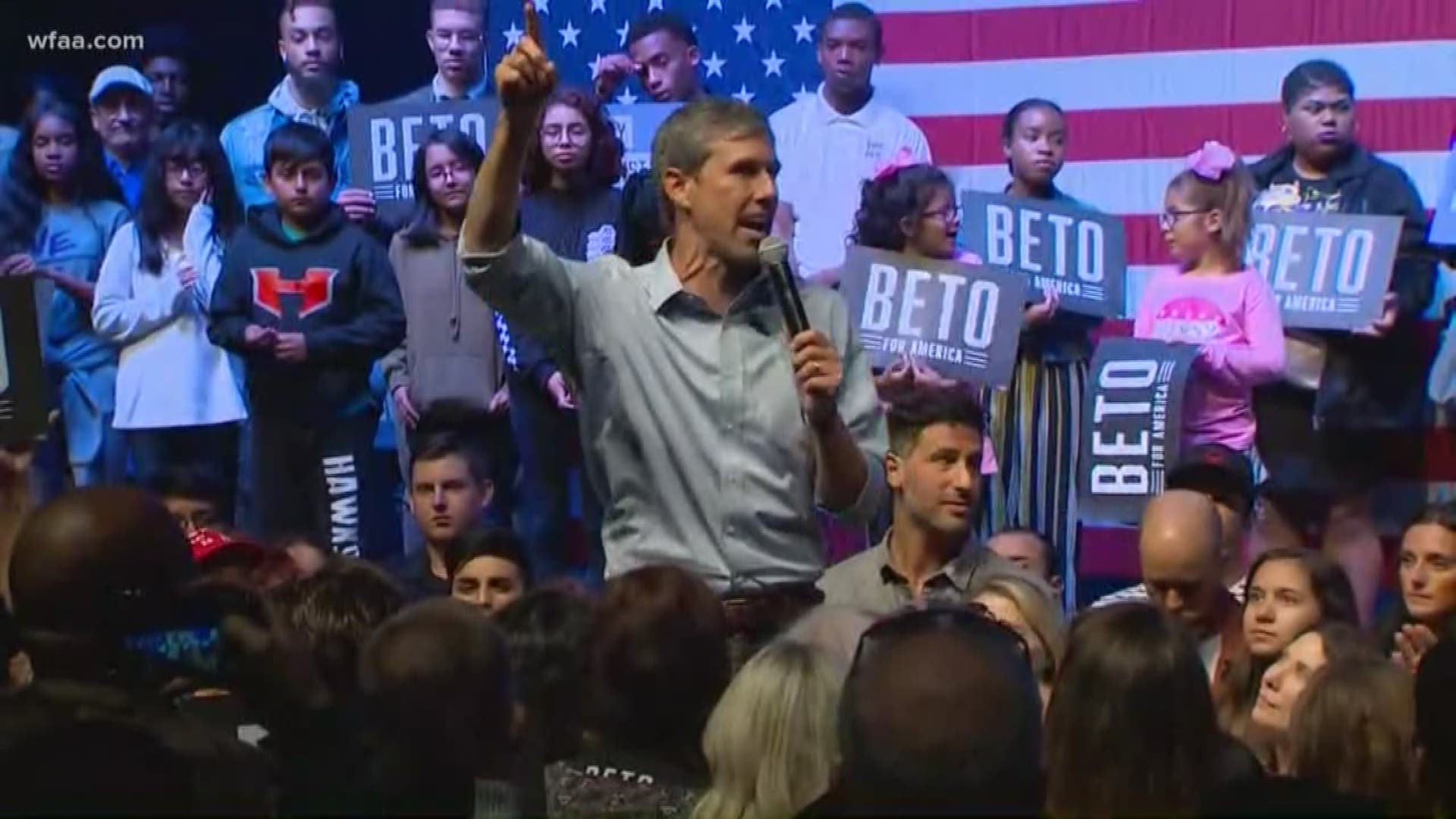 GRAND PRAIRIE, Texas — Crowds cheered and hundreds of supporters filled the seats of the Theatre Thursday for Beto O'Rourke's "Rally Against Fear."

He talked about the mass shooting in El Paso, immigration and other topics throughout the night.

Recap of the rally:

8:52 p.m. Beto O'Rourke concludes his remarks at the "Rally Against Fear" event.

“I love you guys! I will see you later on, down the road, on the trail.”

8:44 p.m. O'Rourke continues to speak of different reasons that Americans should be fearful with Donald Trump as President.

“The generations that follow us are counting on us now at this moment.”

The candidate brought up several topics including women's healthcare, immigration, mass shootings and the recent shooting death of Atatiana Jefferson.

8:30 p.m. After several speakers and musical acts, candidate Beto O’Rourke takes the stage in Grand Prairie. He greeted the crowd by saying “I love you! I love you more than I can say.”

O'Rourke started his remarks by reflecting on the tragedy in his home city of El Paso before moving on to the issues around immigration.

8:11 p.m. O'Rourke's campaign pushed back the time the candidate will be on stage. There are still a few more speakers. Estimated appearance by O'Rourke is now scheduled for 8:30 p.m.

7 p.m. The crowd at the "Rally Against Fear" just observed a moment of silence for U.S. Rep. Elijah Cummings who passed away this morning. ‬‪O'Rourke still has not taken the stage‬.

6:30 p.m. Judge Clay Jenkins energized the crowd before the rally. Jenkins pointed to a poll that said O’Rourke would beat Trump by double digits if the election was held today.

Earlier in the day, Texas Democrats hosted a news conference outside the American Airlines Center ahead of Trump's rally.

During the news conference, several state leaders criticized the president's time in office.

“He ought to call his rally a promise-breaker’s rally," said Dallas County Democratic Chair Carol Donovan.

Women's healthcare, the government shutdown and the border wall were among other topics discussed Thursday.

"We must defend women’s healthcare because everyone deserves the right for quality and affordable health care," said State Rep. Rhetta Bowers.

O'Rourke is one of the candidates competing to be the Democratic nominee in the 2020 Presidential election.

O'Rourke says he raised $4.5 million during the three-month period through September, outpacing his lackluster second-quarter total but still far less than he got at the whirlwind start of his 2020 campaign.

The former Texas congressman's campaign says it saw donations soar after the last Democratic presidential debate in Houston, when O'Rourke declared, "Hell yes, we're gonna take your AR-15, your AK-47." That was a reference to a mandatory buyback of assault-style weapons that he's proposed.

His totals were better than the $3.6 million O'Rourke raised during the second quarter.

They pale in comparison, however, to the $6-plus million O'Rourke took in during his campaign's first 24 hours alone, on his way to collecting $9.4 million during the first quarter, which featured just 18 days of campaigning.

Thursday night's rally marked the second time this year O'Rourke hosted a counter-rally to the president. He did the same thing in El Paso in February.

Late Wednesday evening O'Rourke responded to one of Trump's tweet, which showed a video of people lining up outside the American Airlines Center.

Trump's rally was held at the American Airlines Center at 7 p.m. Click here to follow a live blog of the event.

“Tonight, this President is going to go on stage and lie to his supporters about his standing in the state of Texas and the destruction that he’s caused our state and our country. Let’s be clear: the only reason Donald Trump is in Texas tonight is that he knows he will lose the state and lose this election. Several polls show Trump losing Texas to top Democratic contenders. Donald Trump is terrified.

Democrats will win the White House, take out Trump’s biggest supporter John Cornyn, expand the US House Democratic majority, break the Republican supermajority in the Texas Senate, flip the Texas State House, and win hundreds of local races across the state in 2020."