Abbott announced the state will investigate the claims about Freeman Coliseum in San Antonio, blaming the Biden administration for a "lack of planning." 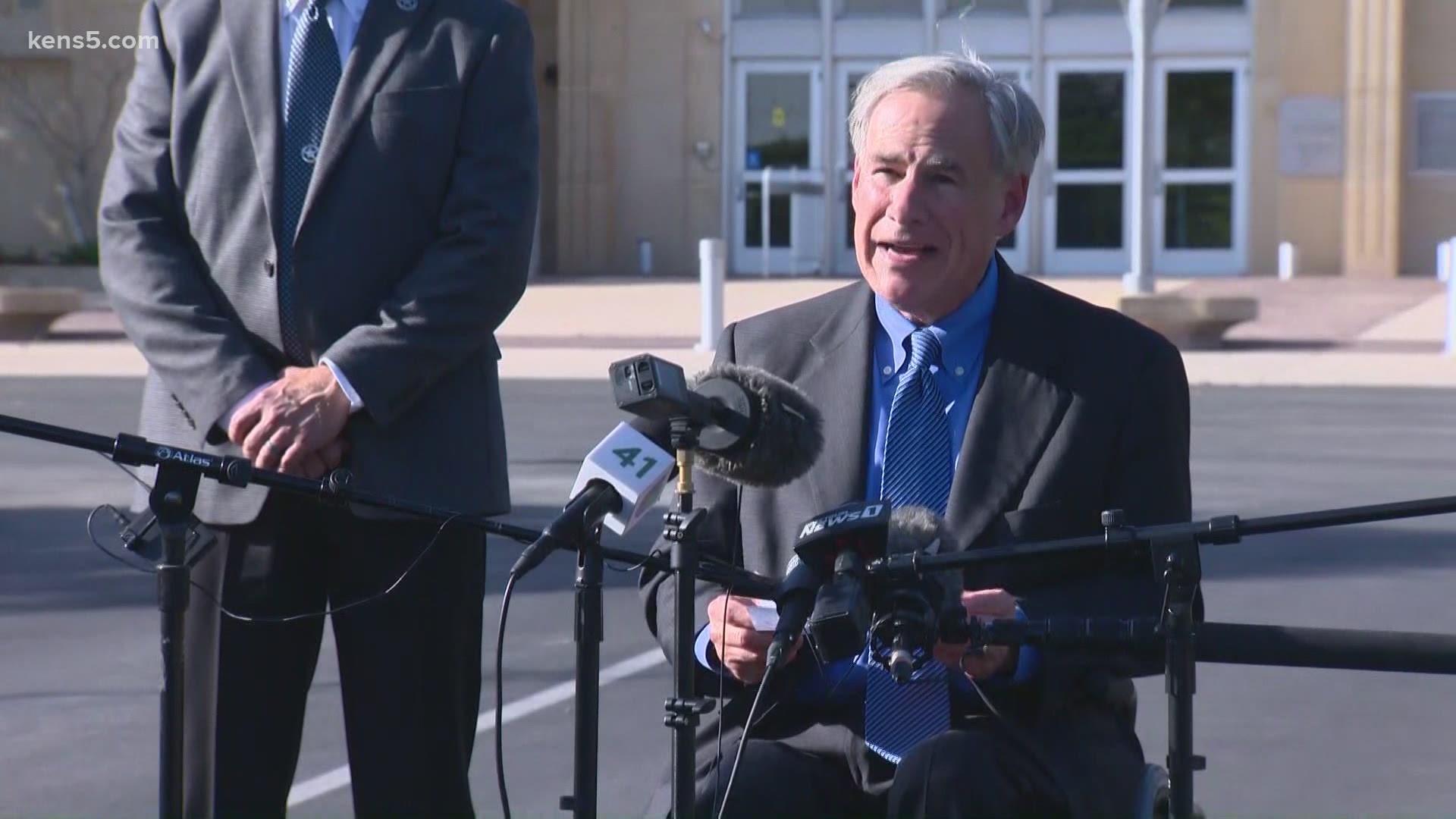 SAN ANTONIO — Speaking near the Freeman Coliseum grounds where hundreds of asylum-seeking children and teenagers are being temporarily sheltered this week, Gov. Greg Abbott called on the Biden administration to shut down the housing operation “immediately” after he says the state has received complaints pointing to abuse and a lack of resources for those staying at the complex.

“These problems are a byproduct of President (Joe) Biden’s open-border policies and the lack of planning at the fallout of those disastrous policies,” Abbott said.

Specifically, Abbott said officials at Texas Health and Human Services and the Texas Dept. of Family and Protective Services have received “very credible allegations” children at the facility are being sexually assaulted; inadequate staffing to safely supervise children at the facility premises; that some children “are not eating throughout the day”; and that facility workers aren’t separating COVID-19-positive children from the rest of the minors at the site.

On Thursday, HHS released this statement:

"As a matter of policy, in order to protect the privacy and security of the unaccompanied children (UC) referred to HHS’ Office of Refugee Resettlement (ORR), ORR does not discuss individual cases. ORR has a zero-tolerance policy for all forms of sexual abuse, sexual harassment, and inappropriate sexual behavior at all UC care provider facilities and acts quickly to address any alleged violations of policy, including initiating employee disciplinary action, termination, or reporting to appropriate investigative entities, such as law enforcement agencies and relevant licensing bodies. We will not comment further on the specifics of the referenced cases."

Abbott didn’t elaborate on who submitted the alleged complaints to state agencies, but implored the Biden administration to move the children to other “federally-run facilities.”

At least one of the complaints is contrary to what local officials have said about protocols at the facility; last month, county leaders told KENS 5 they were planning to separate those who test positive for COVID-19 from everyone else.  Doctors with the Centers for Disease Control are staffed at the complex and monitoring children for COVID symptoms.

Biden's open border policy caused this crisis. I'm calling on the administration to shut down the facility immediately. pic.twitter.com/wbjiB6lVzR

As of Wednesday, HHS officials said the Freeman intake site was housing about 1,645 minors, 283 of which have tested positive for the coronavirus and "remain in medical isolation."

A few hours after Abbott's announcement, a White House spokesperson said the federal government would also investigate the claims, but added the Biden administration "saw no basis for Governor Abbott's call to shut down" the intake site.

KENS 5 reached out to Congressman Chip Roy for comment. He said, “There are more than 20,000 children in federal custody because of Biden’s border crisis. The federal government has endangered the American people and these children. Governor Abbott is 100% correct to demand it end. This crisis has moved well beyond the border with documented cases of cartels pouring into suburban areas of central Texas. Trafficking of human beings and narcotics are skyrocketing, while Biden is not just fiddling, but rolling out the red carpet for child endangerment. Texas must lead this fight.”

In a one-on-one interview with KENS 5's Mariah Medina, Bexar County Judge Nelson Wolff was skeptical about the claims, saying he had heard or seen nothing of the sort during his visits to the shelter. He added if there are child sex abuse issues, "then that needs to be taken care of."

In the meantime, the governor added, members of the Texas Department of Public Safety and Texas Rangers will “immediately begin investigating these allegations.”

At 5:16 p.m. Wednesday, as journalists gathered outside the Freeman Expo Halls’s press conference, someone called the Bexar County Sheriff's Office to report a “sexual offense,” the agency confirmed. Authorities said due to the ongoing investigation they would provide no further details.

A source not authorized to speak publicly on the matter tells me the Bexar County Sheriff’s Office was called to the Freeman Expo Hall for a report of sexual abuse. This comes after the sheriff said his agency would have no part in detaining migrant kids.#KENS5Eyewitness

Several area leaders have responded to the allegations. San Antonio Mayor Ron Nirenberg called them "disturbing if true, and a thorough investigation is warranted.” Republican Congressman Tony Gonzalez said he supports the call for an investigation, saying "we need to have the property level of care provided." And Democratic Congressman Joaquin Castro tweeted Wednesday evening that Abbott "has a responsibility to put forward the evidence" if the allegations prove true.

.@GovAbbott turned a blind-eye to the Trump administration’s grave human rights abuses at the border.

If these serious allegations are true, he has a responsibility to put forward the evidence.

Migrant children are not political props and must be protected while seeking asylum.

KENS 5 has reached to several city and county officials for a response; this story will be updated with those statements when they are received.