Opponents sound off at meeting against Texas High-Speed Rail Project 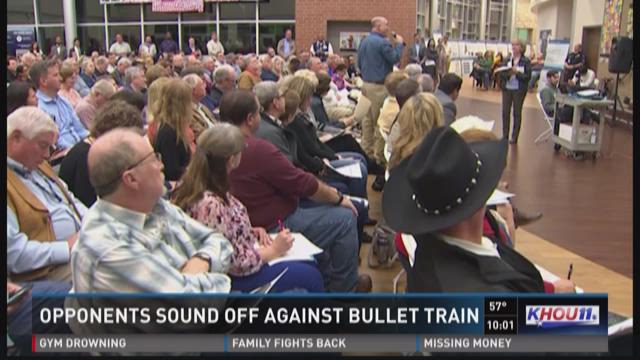 CYPRESS, Texas - Inside a jam-packed school auditorium, the Texas High Speed Rail Project hit a wall of opposition on Monday.

"I've got 350 acres of land and it cuts right through the middle of it," said Calvin House, a property owner in far west Harris County.

The lines stretched outside the meeting, hundreds of people who, like House, say this project will destroy property families have owned for generations.

"You're going to have a train every 25 minutes traveling over 200 miles per hour, and it sounds like a jet plane going by," said House.

The Federal Railroad Administration listened for three hours as person after person slammed the bullet train project. Most people in attendance live or work right along the proposed Utility Corridor where the bullet train would travel from Houston to Dallas.

"It will not ever make money," said House.

And that's why people in attendance on Monday sounded off.

"Who will subsidize this when it fails," asked Waller County Judge Trey Duhon. "We will."

Duhon says taxpayers will end up footing the bill on this train to nowhere.

Despite these public comments, the project appears to be speeding ahead with celebratory style station drawing unveilings in Houston and Dallas. But folks say they'll do what they can to put the brakes on a project they say will hurt Texas.

"I don't know if it will matter what we say tonight, but I know this project is a long way from becoming a reality, and we still have a lot to say about it," said Duhon.

There are two more public hearings scheduled for tomorrow night in Waller and Grimes County.

If you don't get a chance to speak, you have until March 9 to submit your comments.

More information on how to do that can be found here.

The high speed rail's path will run through 10 counties, and many residents in those counties say it will come at a price.