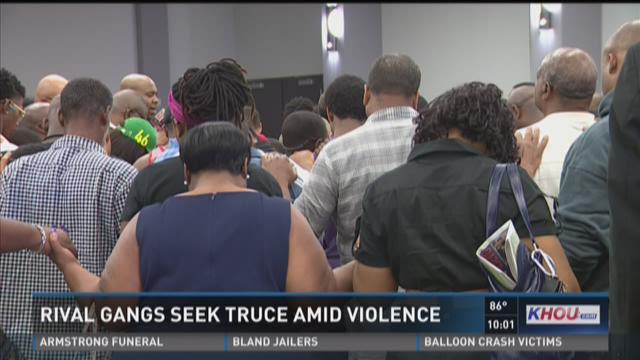 HOUSTON, Texas – Hundreds of people gathered in southwest Houston to call for an end to bloodshed caused by gang violence on Saturday.

The Anti-Violence Gang Truce Summit was held at the Fountain of Life Center. It was organized by multi-faith leaders in the African American community.

“Today, let’s create a new atmosphere where children don’t have to live in a world where dying early is a reality,” said E.A. Deckard, pastor at Greenhouse International Church. “No more excuses. No more bloodshed. It takes everybody this season to get involved.”

Deckard said a coalition of faith leaders have committed to working together for a year on the “One Houston, One Hood” initiative.

They plan to go to neighborhoods with the highest crime rates to urge at-risk youths to put down weapons and turn towards unity, education, and employment instead.

“These kids need love, guidance, and patience,” said Dahlia Mack, a mother at the event. “It’s just sad. I’m a mother of a teenage kid. I think I would be devastated if I got that knock or the door or that phone call.”

Many of the young adults in the crowd were already involved in gangs or have criminal records.

“It’s all shootings that’s going on. It’s not people dying from cancer, or dying in his sleep, or no type of natural causes. Nothing like that. It’s all a man killing another man. Not just a man killing another man, but people in our own community killing us. We have to stand up and make a difference. Make a change,” said a gang member who did not want to be named.

“Every problem, every infection starts with yourself. I’m going to talk to my people and get everyone on the same track. On the right track. On a good track. From there, a change will occur. No ands, ifs, or buts about it.” he said.

Organizers said they plan to track their progress by monitoring crime activity in certain neighborhoods on a quarterly basis.