The officer on life support has now died from the stroke he suffered after Wednesday's riots, said US Capitol Police in a statement. 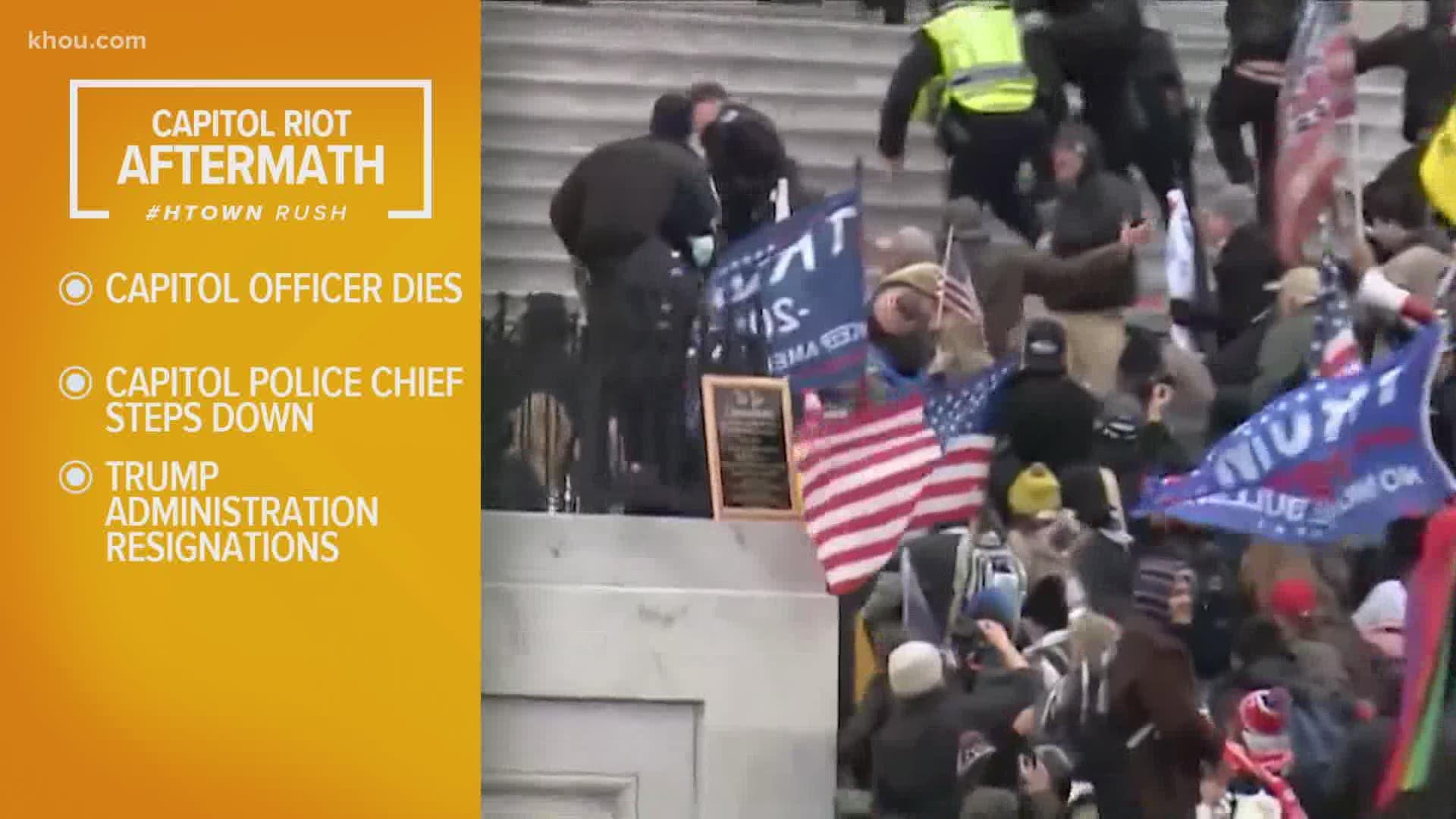 WASHINGTON — A police officer with the U.S. Capitol Police (USCP) died after he suffered a stroke at the Capitol during riots, according to US Capitol Police in a late statement Thursday night.

The officer that died is Brian D. Sicknick. He was a 15-year veteran of the force and 40 years old. No information was given on where the officer was stationed around the Capitol on Wednesday as a mob of Trump supporters breached the Capitol.

Officer Sicknick joined the USCP in July 2008 and most recently served in the Department’s First Responder’s Unit.

The force's union Chairman Gus Papathanasiou originally told WUSA9 that the officer had passed away earlier in the day Thursday, but he was still on life support until his family was able to see him pass late in the evening.

The news of the officer's condition came minutes after US Capitol Police Chief Steven Sund resigned from his position. The announcement of Sund's resignation came Thursday evening after U.S. House Speaker Nancy Pelosi (D-Calif.) and the president of the Capitol Police Officer's Union both called for him to step down.

Outside of the officer's death, four initials deaths were reported from the riots Wednesday, including the fatal shooting of a woman by Capitol Police. She was shot when climbing into the House Chamber, according to information released by DC Police. Three others died from medical emergencies, DC Police said.

Videos posted to social media saw badly outnumbered Capitol Police officers trying to hold the line Wednesday against a pro-Trump mob, some of whom were armed, intent on pushing its way into the Capitol. More than 50 Capitol and D.C. police officers were reportedly injured while responding Wednesday.

This video of the siege of the Capitol on TikTok is crazy and different than I had seen pic.twitter.com/JXwvKVLjxB

But other videos from the day also went viral, including one of a Capitol Police officer appearing to agree to a selfie during a live stream by a member of the group that had breached the building. At the point the video was taken, the mob had already violently pushed its way past the Capitol Police line and caused the evacuation of two Congressional office buildings, plus the lockdown and eventually evacuation of both chambers of Congress.

Within just a few hours, the video had been captured and re-uploaded by dozens of other accounts, some of which had drawn hundreds of thousands of reactions on Twitter alone.

It’s a dark day in America when a UNITED STATES Capitol police officer decides to take a selfie with a TERRORIST! And they wonder why WE don’t feel safe! pic.twitter.com/UZsLnS2s68