Photos on social media showed Jacob Fracker and Thomas Robertson inside the Capitol, according to the Justice Department. One included an obscene gesture. 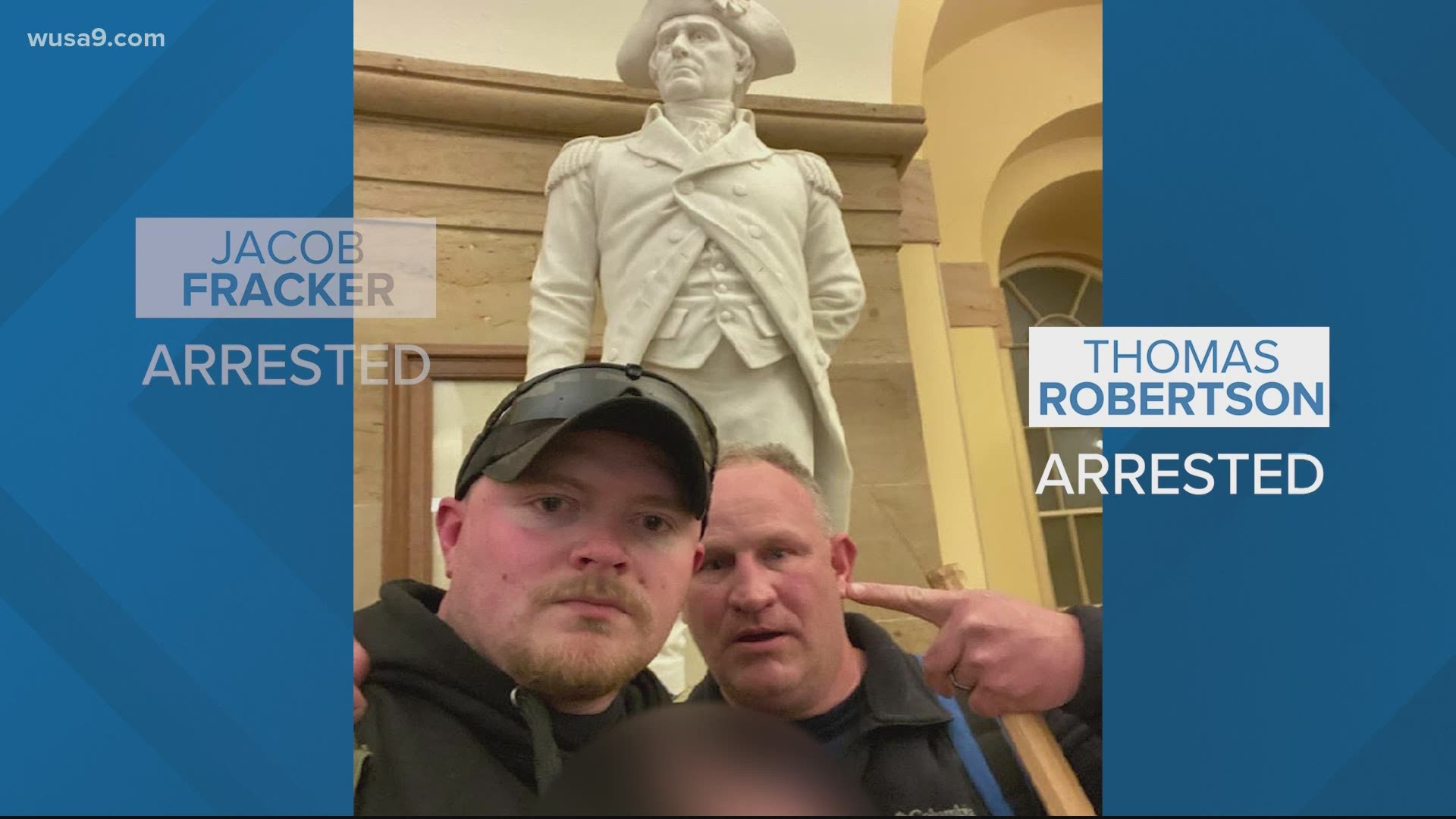 Jacob Fracker and Thomas Robertson, two Rocky Mount, Virginia police officers, were charged with one count of knowingly entering or remaining in any restricted building or grounds without lawful authority and one count of violent entry and disorderly conduct on Capitol grounds.

Both men were arrested on Jan. 13 in Virginia, according to the U.S. State’s Attorney’s office for Washington, D.C.

During the last week's riots, the men were allegedly photographed making obscene gestures in front of the John Stark statue.

Reports state that Robertson said on social media, “CNN and the Left are just mad because we actually attacked the government who is the problem and not some random small business...The right IN ONE DAY took the f***** U.S. Capitol. Keep poking us.”

Roberston said he was proud of the photo because he was “willing to put skin in the game.” On Facebook, Fracker posted a comment that read, “Lol to anyone who’s possibly concerned about the picture of me going around... Sorry I hate freedom? …Not like I did anything illegal…y’all do what you feel you need to.”

The posts have since been deleted from social media.

The ATF and FBI continue to urge the public to report suspected use of explosive devices, or violent, destructive acts associated with the recent unrest. Anyone with information can call 1-888-ATF-TIPS (1-888-283-8477), email ATFTips@atf.gov or submit information anonymously via ReportIt.com.

Six people died, including a woman who was shot and two Capitol Police officers, and dozens were injured when pro-Trump rioters stormed the U.S. Capitol on Wednesday, Jan. 6.

Thousands of Trump supporters surrounded the U.S. Capitol following a rally on the National Mall to protest unfounded claims of election fraud in which the President told the crowd to “fight like hell”, and that if they didn’t they were “not going to have a country anymore.”

The mob forced its way in while a joint session of Congress led by Vice President Mike Pence was being held to certify the electoral college vote, confirming Joe Biden’s presidency. The rioters smashed windows, pushed back police lines and scaled the walls of the Capitol, gaining entry as far as the House and Senate Chambers where the historic vote had been happening just minutes before.

The looters ransacked offices of leaders like Speaker of the House Nancy Pelosi and damaged or stole property throughout the complex.

The building was locked down for more than 4 hours, key members of the government were ushered away by armed security to safe locations while other Congressmen and women and their aides barricaded in their offices, fearful for their safety.

More than a dozen people have been charged with federal crimes, but the FBI is still working to identify many other rioters. Anyone with tips can call 1-800-CALL-FBI (800-225-5324) or submit images or videos at fbi.gov/USCapitol.

RELATED: Hundreds of National Guard rest on the floor of US Capitol after rushing to dispatch to DC