Members of the student-led movement insist their generation can push the nation toward tougher gun laws. 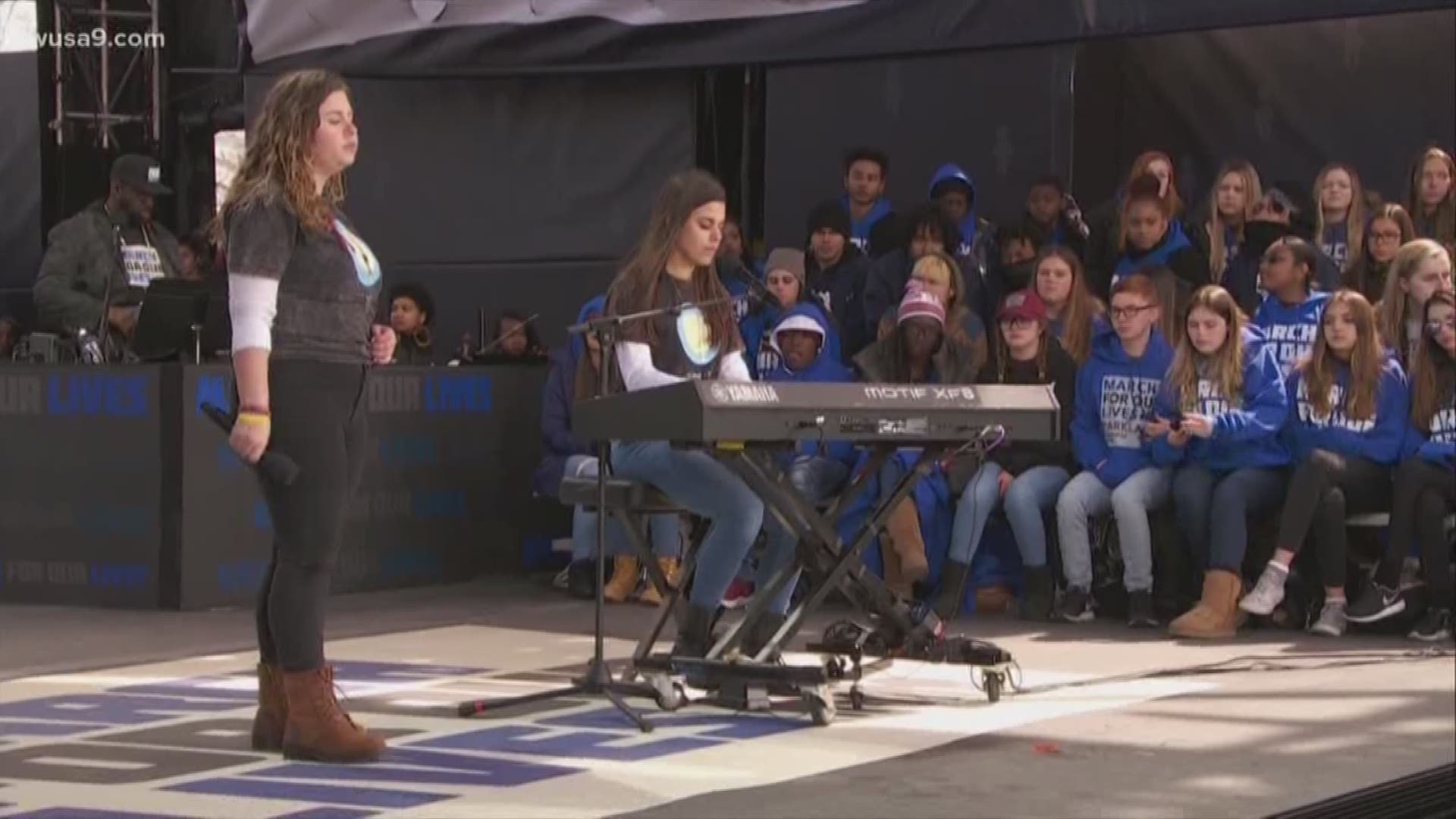 Well over 1 million students — and their supporters — packed the streets in Washington, D.C., and around the globe Saturday to make a powerful statement against gun violence and call on lawmakers to pass stricter laws or face their wrath at the polls.

Busload after busload filled the nation's capital with students from across the country, including some from as far away as California and Minnesota, for the March for Our Lives, a rally announced just days after a Valentine's Day shooting at Marjory Stoneman Douglas High School in Parkland, Fla.

In passionate speeches, students from Marjory Stoneman gave a rallying cry to wild cheers from the thousands assembled along Pennsylvania Avenue.

A tearful Emma Gonzalez, whose speech at a Fort Lauderdale rally three days after the Valentine's Day shooting galvanized the student movement, paid tribute to all of her fallen friends who "would never again" do the simplest things in life. She then stood silently for several minutes before a teary-eyed crowd, a painful hush marking the little over six minutes it took for the gunman to snuff out 17 lives.

"Fight for your lives before it is someone else's job," Gonzalez implored.

Cameron Kasky, another Stoneman Douglas student, said the student movement's message to politicians was simple: "Either represent the people or get out."

The young Stoneman Douglas students, many of whom are just reaching voting age, vowed to work to make reducing gun violence the central issue of their generation.

Polls show that Americans are increasingly in favor of stricter gun laws. By almost 2-1, 61%-33%, they say tightening gun-control laws and background checks would prevent more mass shootings in the United States, according to a USA TODAY/ Suffolk Poll published last month. Even wider margins of Americans semi-automatic weapons like the AR-15, which was used in the Florida shooting, should be banned.

But Americans have little confidence that Congress will act. Fewer than one in five, 19%, say the odds are excellent or good. More than three in four; 76%, rate them as fair or poor.

Still, members of the student-led movement insist their generation can push the nation toward tougher gun laws.

“This is not a red versus blue issue,” said Sarah Chadwick, a Stoneman Douglas student. “This is a moral issue. And to the politicians who believe their right to own a gun comes before our lives, get ready to be voted out by us, the future."

Many of the Florida students took particularly sharp jabs at their junior senator, Republican Marco Rubio, who they note has received about $3.3 million in campaign contributions from the NRA and gun lobby during his political career.

The students wore orange price tags of $1.05, the amount Rubio has received from the gun lobby divided by the number of students in Florida, to suggest that's how much they were worth to him.

Stoneman Douglas students and brothers Juan and Santiago Munera said they were tired but determined as they walked on Pennsylvania Avenue toward the main stage. They arrived in Washington two hours before the rally after a grueling 23-hour bus ride from Florida.

Juan Munera said he's been inspired by his Stoneman Douglas peers that they can help make change. “Before the shooting we didn’t think we could make a difference as teens,” said Juan Munera, 17. "Now we’re trying to change gun laws.” 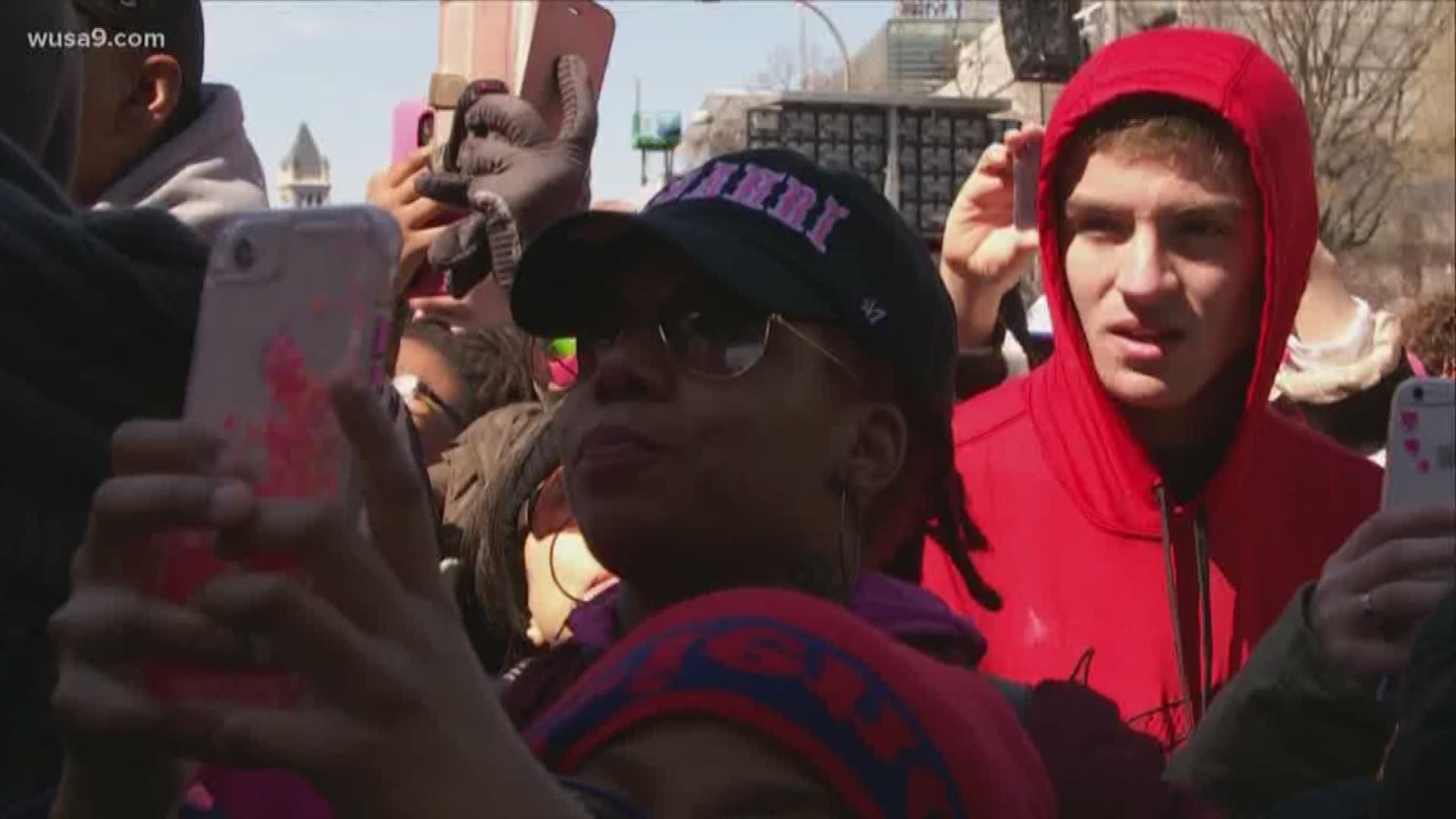 About 800 sister marches were scheduled in every U.S. state and on every continent. About 800,000 descended on the nation's capital, exceeding expectations including many from Parkland.

"Our voices are being stifled," said 17-year-old Rasleen Krupp, who spoke to marchers at the Cincinnati rally. "At the end of this movement, we will be saving our own lives. But this is only the first mile."

In Iowa City, Iowa, where 10-inches of snow was in Saturday's forecast, elementary student Margalit Frank spoke to a crowd of several hundred people.

“I’m 12 years old, and I don’t want to be murdered,” Frank, a student at Longfellow Elementary School said. “I don’t want to wake up every day and wonder if today is the day someone shoots up my school."

Matt Collins, a gun owner and defense contractor from Fairfax, Va., said he once bristled at calls for stricter gun laws, but repeated school shootings changed his mind. Collins said he's many friends who disagree with him.

“I have been frustrated, every time something like this happens, there is a cycle,” Collins said. “I own a gun, I believe in the Second Amendment. I think there are measures short of repealing the second amendment that can make everyone safer.”

The march organizers also recruited teens from urban areas to speak about how gun violence is impacting their daily lives.

Edna Chavez, a student at Los Angeles' Manuel Arts High School Living whose older brother was gunned down in front of their home in 2007, said gun violence has become too normalized in neighborhoods like her own.

“I have lived in South L.A. all my life and have lost many loved ones to gun violence,” Chavez said. “This is normal — normal to the point I’ve learned to duck from bullets before I learned to read."

Hundreds of people have already shown up for #MarchForOurLives. Rally officially starts at 12. pic.twitter.com/dLrxNCS8kf

The Florida shooting instantly reignited the gun-control debate. The students in Parkland — who spoke with a loud voice and amassed an enormous following in the hours and days after the shooting — seemed to disrupt the typical cycle after an attack and vowed to not let the issue fade from the headlines.

Within a month of the rampage, several companies cut ties with the National Rifle Association, students from 3,000 schools held a nationwide walkout, and Florida's governor signed a comprehensive bill that included tightening gun laws.

Attorney General Jeff Sessions announced Friday that he was proposing new regulations that would effectively ban so-called bump-stock devices that allow rifles to mimic fully automatic machine gun fire. Bump stocks were not used in the Parkland shooting but were used by the gunman who opened fire on Las Vegas concertgoers, killing 58 and injuring hundreds more, in the October mass shooting in that city. 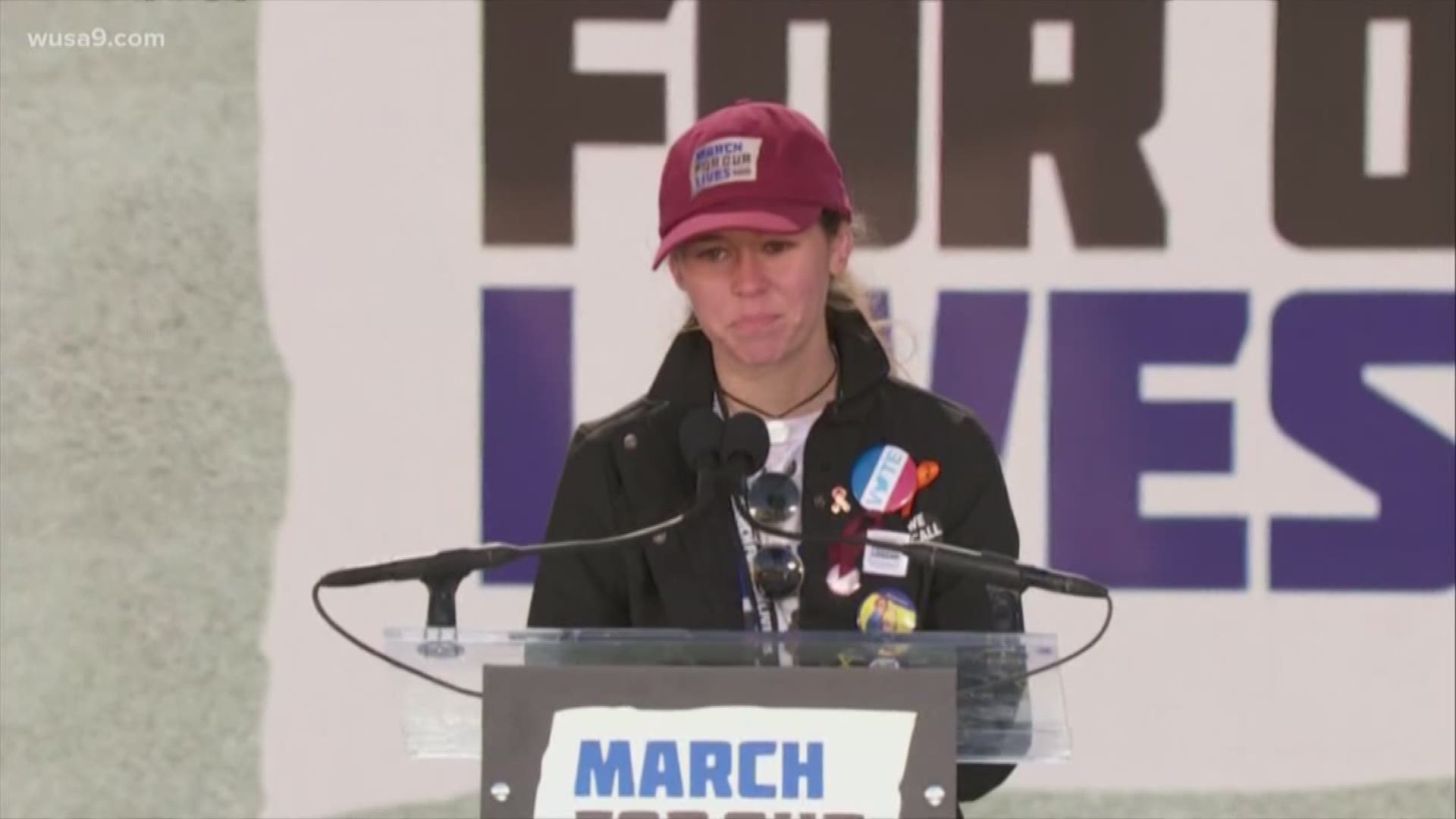 At the New York City rally, organizers paused to the names of the 17 Parkland victims and honor them with a moment of silence.

Tahara Anderson, 42, from Wantagh, N.Y., said the repeated school shootings around the country have taken their toll on her two sons, ages 10 and 7, and left her with a "feeling of dread."

"One of them was really scared because the lockdown drills have increased," she said. "He was crying, 'What if I'm in the hall, what if I can't get to my brother?'"

Still, she remained hopeful that the student-led push bring change in the nation's gun laws. .

"What an inspiration they are," she said. "Maybe they will be the voice that will bring the change."

PHOTOS: The best signs at the March For Our Lives