Social media users slammed the move and #BoycottWalmart was trending Friday on Twitter. 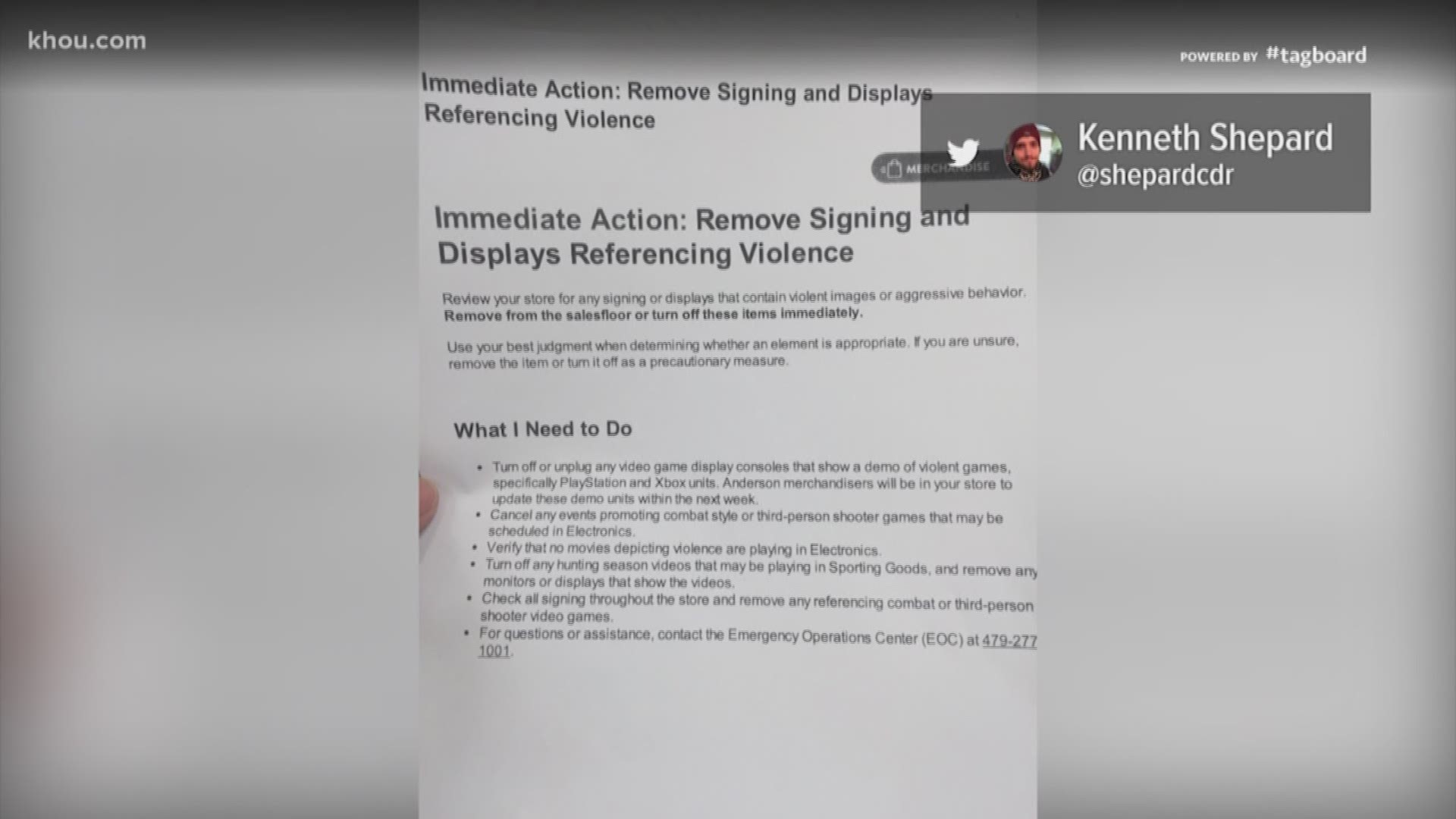 NEW YORK — Walmart has ordered workers to remove video game signs and displays that depict violence from stores nationwide after 22 people died in a shooting at one of its Texas stores, but the big box retailer will continue to sell guns.

In an internal memo, the retailer told employees to remove any violent marketing material, unplug Xbox and PlayStation consoles that show violent video games and turn off any violence depicted on screens in its electronics departments.

Employees also were asked to shut off hunting season videos in the sporting goods department where guns are sold. "Remove from the salesfloor or turn off these items immediately," the memo said.

Walmart will still sell the violent video games and hasn't made any changes to its gun sales policy, despite pressure from workers, politicians and activists to do so.

"We've taken this action out of respect for the incidents of the past week," Walmart spokeswoman Tara House said in an email. She declined to answer any questions beyond the statement.

Detractors panned the move as an empty gesture aimed a deflecting criticism rather than solving a problem.

"That is a non-answer and a non-solution," said Thomas Marshall, who works at Walmart's e-commerce division in San Bruno, California, and has helped organize a petition to get the company to stop selling guns. He said they plan to email the petition, which has more than 53,000 signatures, to Walmart CEO Doug McMillon on Friday.

After the massacre at the El Paso Walmart this weekend, McMillon said the company "will be thoughtful and deliberate in our responses."

After the mass shooting at a Parkland, Florida, high school last year, Walmart Inc. banned sales of firearms and ammunition to people younger than 21. It had stopped selling AR-15s and other semi-automatic weapons in 2015, citing weak sales.

President Donald Trump blamed "gruesome and grisly video games" for encouraging violence Monday, but there is no known link between violent video games and violent acts.

The El Paso massacre was followed by another shooting hours later in Dayton, Ohio, that killed nine people.

The United States has had 254 mass shootings —instances of four or more people being shot in individual outbreaks — in 2019, according to the Gun Violence Archive. That's more mass shootings than days so far this year.

Scott Galloway, a marketing professor at New York University, said the move to hide violent imagery in stores was "a cheap attempt to distract consumers and the media from the real issue, which is, Walmart continues to sell guns."

Social media users slammed the move, too, and #BoycottWalmart was trending Friday on Twitter.

Other companies have made changes after the shootings. ESPN postponed the airing of an esports competition for shooting game "Apex Legends." And NBC Universal pulled some ads for its upcoming movie "The Hunt," which depicted characters hunting and shooting at each other.

The killings have put the country on edge.

On Thursday, panicked shoppers fled a Walmart in Springfield, Missouri, after a man carrying a rifle and wearing body armor walked around the store before being stopped by an off-duty firefighter. No shots were fired and the man was arrested after surrendering.

RELATED: 2 dead, 2 wounded in shooting at Walmart in Mississippi

On Friday, Massachusetts Sen. Elizabeth Warren, a Democrat running for president, blasted Walmart in a tweet.

"The weapons they sell are killing their own customers and employees. No profit is worth those lives. Do the right thing —stop selling guns," she wrote.