Trump takes no responsibility for riot during trip to South Texas

Trump brushed off Democratic calls on his Cabinet to declare him unfit from office and remove him from power using the 25th Amendment. 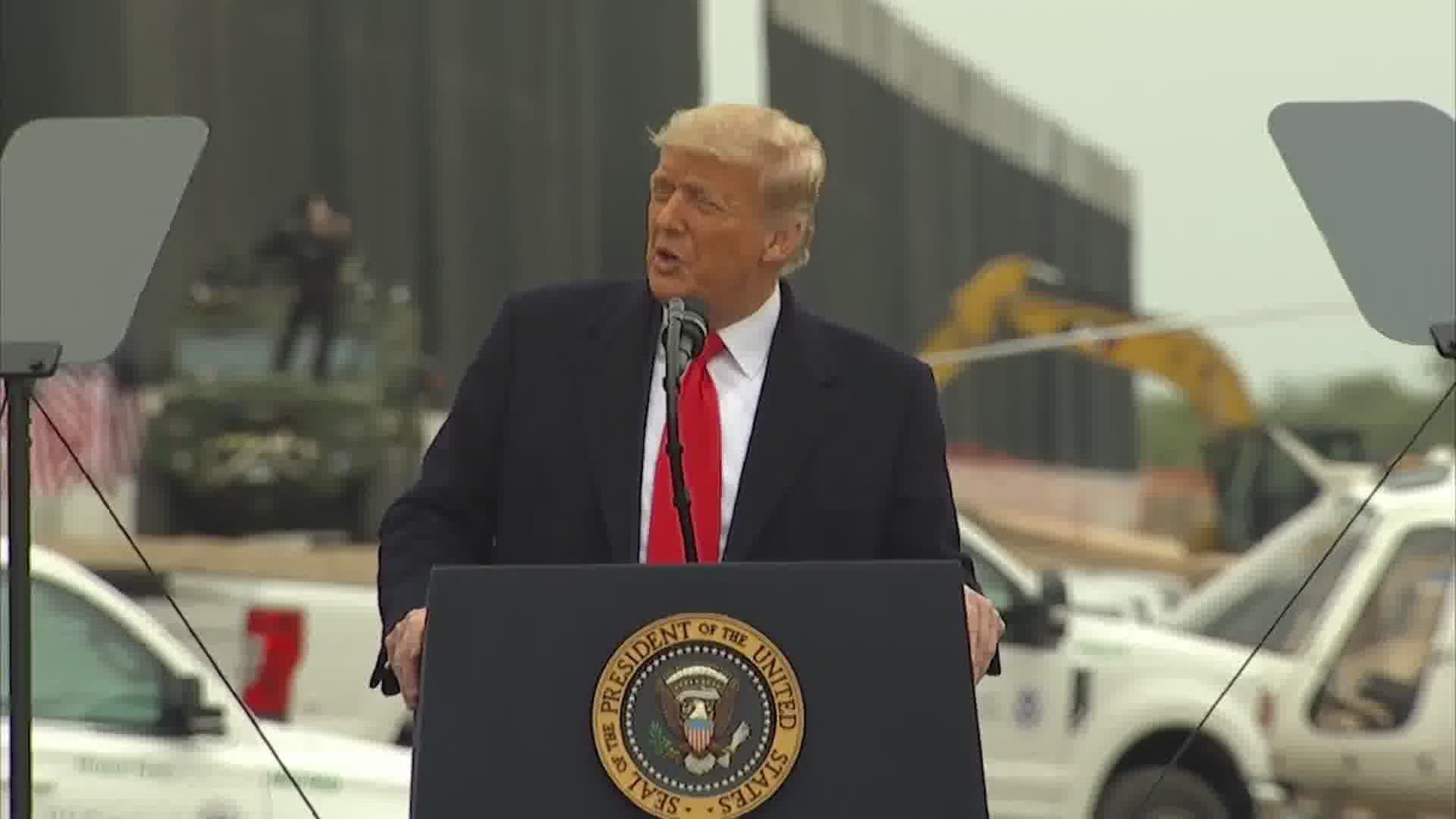 WASHINGTON — President Donald Trump on Tuesday took no responsibility for his part in fomenting a violent insurrection at the U.S. Capitol last week, despite his comments encouraging supporters to march on the Capitol and praise for them while they were still carrying out the assault.

“People thought that what I said was totally appropriate,” Trump said.

He made the comments during his first appearance in public since the Capitol siege, which came as lawmakers were tallying Electoral College votes affirming President-elect Joe Biden’s victory. Trump arrived in Texas on Tuesday to trumpet his campaign against illegal immigration in an attempt to burnish his legacy with eight days remaining in his term, as lawmakers in Congress appeared set to impeach him this week for the second time.

In Alamo, Texas, a city in the Rio Grande Valley near the U.S.-Mexican border — the site of the 450th mile of the border wall his administration is building, Trump brushed off Democratic calls on his Cabinet to declare him unfit from office and remove him from power using the 25th Amendment.

“The 25th Amendment is of zero risk to me, but will come back to haunt Joe Biden and the Biden administration,” Trump said. “As the expression goes, be careful of what you wish for.”

The rampage through the halls of Congress sent lawmakers of both parties and Trump's own vice president into hiding, as crowds called for Mike Pence's lynching for his role overseeing the vote count. The scene also undermined the hallmark of the republic — the peaceful transition of power. At least five people died, including one Capitol Police officer.

“It’s time for peace and for calm,” Trump said Tuesday, less than a week after egging on the mob that descended on the Capitol. He added, “Respect for law enforcement is the foundation of the MAGA agenda," referencing his campaign slogan, “Make America Great Again.”

In the days leading up to the Jan. 6 certification vote, Trump encouraged his supporters to descend on Washington, D.C., promising a “wild” rally in support of his baseless claims of election fraud, despite his own administration’s findings to the contrary. Speaking for more than an hour to a crowd on the Ellipse, Trump encouraged supporters to “fight like hell” and suggested that Republican lawmakers would need “more courage not to step up” and overturn the will of voters to grant him another term in office. He also suggested he would join them in marching on the Capitol.

As Trump wrapped up, thousands of his supporters were already heading to the Capitol, where lawmakers convened to count the electoral votes. As rioters were still in the building and lawmakers sheltered in secure locations, Trump, at the urging of aides who were shocked by the violence, released a video seemingly excusing the events, saying of the rioters: “We love you. You’re very special. Go home.”

Speaking Tuesday, Trump said the “real problem” was not his rhetoric, but the rhetoric that Democrats used to describe Black Lives Matter protests and violence in Seattle and Portland this summer.

“Everybody to the ‘t’ thought it was totally appropriate,” Trump said of his own comments.

Trump angrily lashed out at lawmakers' push for his second impeachment this week, claiming, “It’s causing tremendous anger and division and pain far greater than most people will ever understand, which is very dangerous for the USA, especially at this very tender time."

Alamo is named after the San Antonio mission where a small group of Texan independence-fighters fended off Mexican forces during a 13-day siege. Most of them died, but the mission became a symbol of resistance for Texans, who eventually defeated the Mexican army.

Trump's visit there — no doubt a symbol of the president's defiance — comes as he spends the final days of his presidency isolated, aggrieved and staring down the prospect of a second impeachment.

While Trump was traveling, Pence assured the nation’s governors that outgoing administration is working “diligently” with President-elect Joe Biden’s team. He thanked the governors for their leadership on the coronavirus and promised them a “seamless transition.”

Trump aides have been urging the president to spend his remaining days in office highlighting what they see as the chief accomplishments of his presidency: a massive tax cut, his efforts to roll back federal regulations and the transformation of federal courts with the appointment of conservative judges. But Trump has been consumed by baseless allegations of voter fraud and conspiracies.

In Texas, he delivered remarks highlighting his administration's efforts to curb illegal immigration and the progress made on his signature 2016 campaign promise: building a “big, beautiful wall” across the length of the southern border — an imposing structure made of concrete and reinforced steel. But over time, Trump demanded modifications that have been largely rejected: He wanted it painted black to burn the hands of those who touched it; he wanted it adorned with deadly spikes; he even wanted to surround it with an alligator-filled moat. While he promised that it would be funded by Mexico, U.S. taxpayers ended up footing the bill.

In the end, his administration has overseen the construction of roughly 450 miles of border wall construction — likely reaching 475 miles by Inauguration Day. The vast majority of that wall replaces smaller barriers that had already existed, though the new wall is considerably more difficult to bypass.

Over the last four years, Trump and his administration have taken extreme — and often unlawful — action to try to curb both illegal and legal immigration. Their efforts were aided in his final year by the coronavirus pandemic, which ground international travel to a halt. But the number of people stopped trying to cross the southern border illegally has been creeping back up in recent months. Figures from December show nearly 74,000 encounters at the southwest border, up 3% from November and up 81% from a year earlier.

A few dozen Trump supporters rallied hours before his visit to the Rio Grande Valley near the Harlingen, Texas, airport, where he was scheduled to land. They planned to stage a caravan of vehicles flying flags that support the president and far-right causes like the QAnon conspiracy theory.

Trump warned that a reversal of his policies by Biden would bring about a “tidal wave of illegal immigration.” He added, “To terminate those policies is knowingly to put America in really serious danger.”

Biden has said he’d halt construction of the border wall and take executive action where possible to reverse some of Trump’s restrictions on legal immigration and asylum seekers. But Biden and his aides have acknowledged the possibility of a new crisis at the border if they act too quickly, and Biden has said it could take six months for his administration to secure funding and put in place the necessary infrastructure to loosen Trump-era restrictions.

Beyond touting the wall, Trump rapidly listed his massive changes on the border aimed at discouraging asylum. He cited his “Remain in Mexico” policy, under which more than 65,000 asylum-seekers have been forced to wait in Mexico for hearings in U.S. immigration court since January 2019, and agreements struck with Central American countries for them to offer asylum to people seeking protection in the United States.

He credited his wall for a drop in illegal border crossings from a 13-year high in 2019, but the Government Accountability Office has found the administration lacks measures to correlate drops in illegal crossings to wall construction.

Trump said, falsely, that he inherited “open borders” from his predecessor, Barack Obama. He leaves office with about the same number of Border Patrol agents than when he began, despite a pledge to add 5,000, and the monthly number of migrants stopped at the border exceeds totals during much of Obama’s tenure.