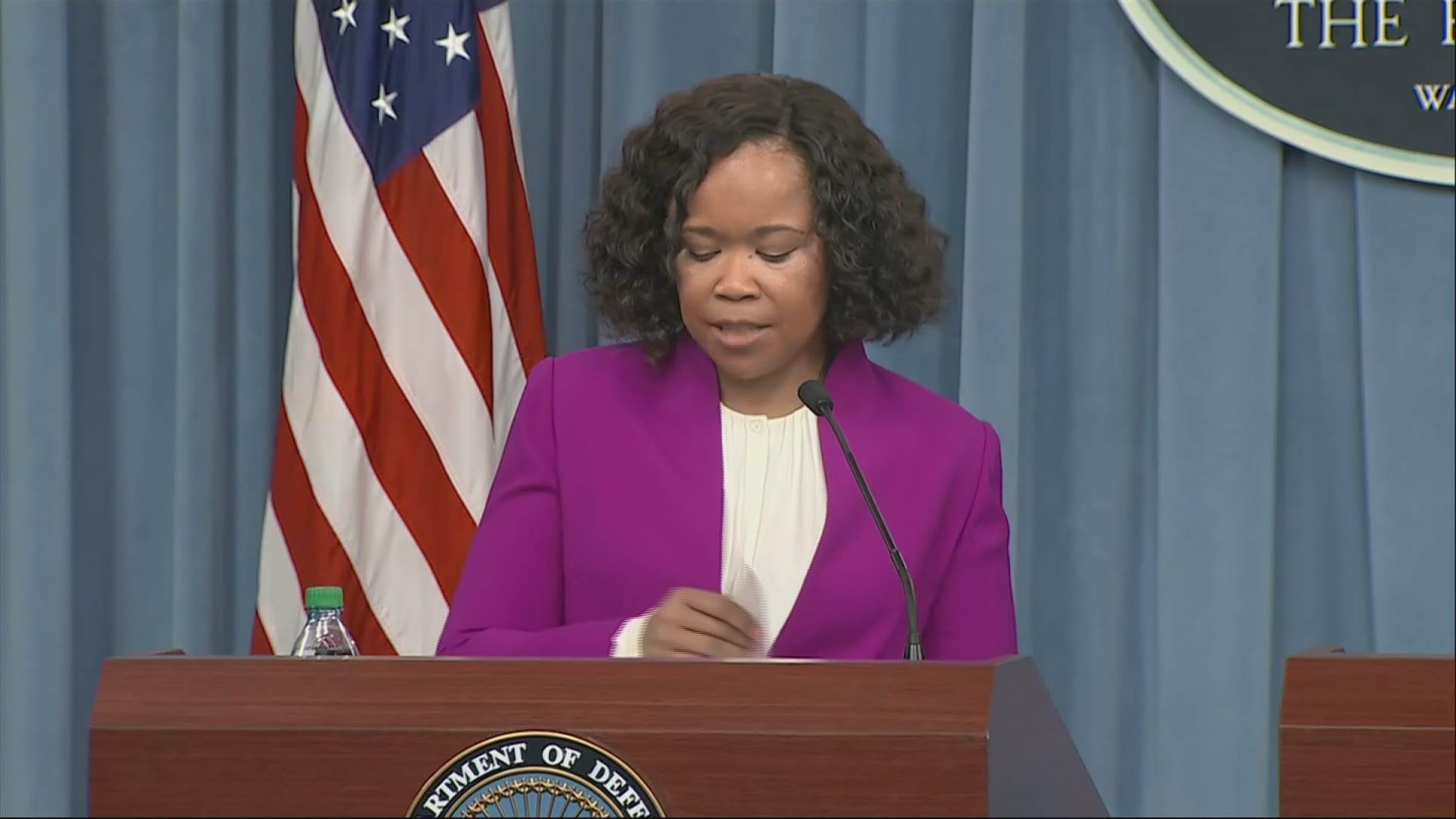 Lt. Gen. Kenneth McKenzie, director of the Joint Staff at the Pentagon, told reporters Saturday that the weapons used in the operation were a mix of sea and air-launched missiles fired by U.S., British and French forces and “successfully hit every target.”

The goal, he said, was to hit the "very heart" of Syria's chemical weapons program by targeting its research, development and storage facilities. The strikes come one week after reports of a grisly chemical attack in the town of Douma that killed more than 40 people.

"This is going to set the Syrian chemical weapons program back for years," McKenzie said.

Credit: U.S. Navy
In this handout released by the U.S. Navy, the guided-missile cruiser USS Monterey (CG 61) fires a Tomahawk land attack missile at Syria as part of an allied strike April 14, 2018. .(Photo by Matthew Daniels/U.S. Navy via Getty Images)

Syrian forces fired 40 surface-to-air missiles during the operation, mostly after the attack was over, he said.

"They were largely ineffective and increased risk to their own people," he said. “None of our aircraft or missiles involved in this operation were successfully engaged by Syrian air defenses.”

He also said there was no indication that Russian air-defense systems were employed during the attacks.

McKenzie said there were no initial reports of civilian casualties in large part because the operation was planned to be carried out during the night. "We weren't trying to kill a lot of people," he said.

A perfectly executed strike last night. Thank you to France and the United Kingdom for their wisdom and the power of their fine Military. Could not have had a better result. Mission Accomplished!

Gen. Joseph Dunford, the chairman of the Joint Chiefs of Staff, said late Friday that that the operation was "a one-time shot” but did not rule out further attacks.

While the Pentagon stressed the narrow, precise-nature of the attacks, Trump emphasized in announcing the strikes that the allied forces "are prepared to sustain this response until the Syrian regime stops its use of prohibited chemical agents."

Syria has denied using chemical weapons. But Friday night, the White House released what it said was "a significant body of information" that pointed to the use of chlorine gas — and possibly also the deadly nerve agent sarin. That evidence includes victim statements, images of barrel bomb fragments and reliable reports of Syrian government helicopters in the area. 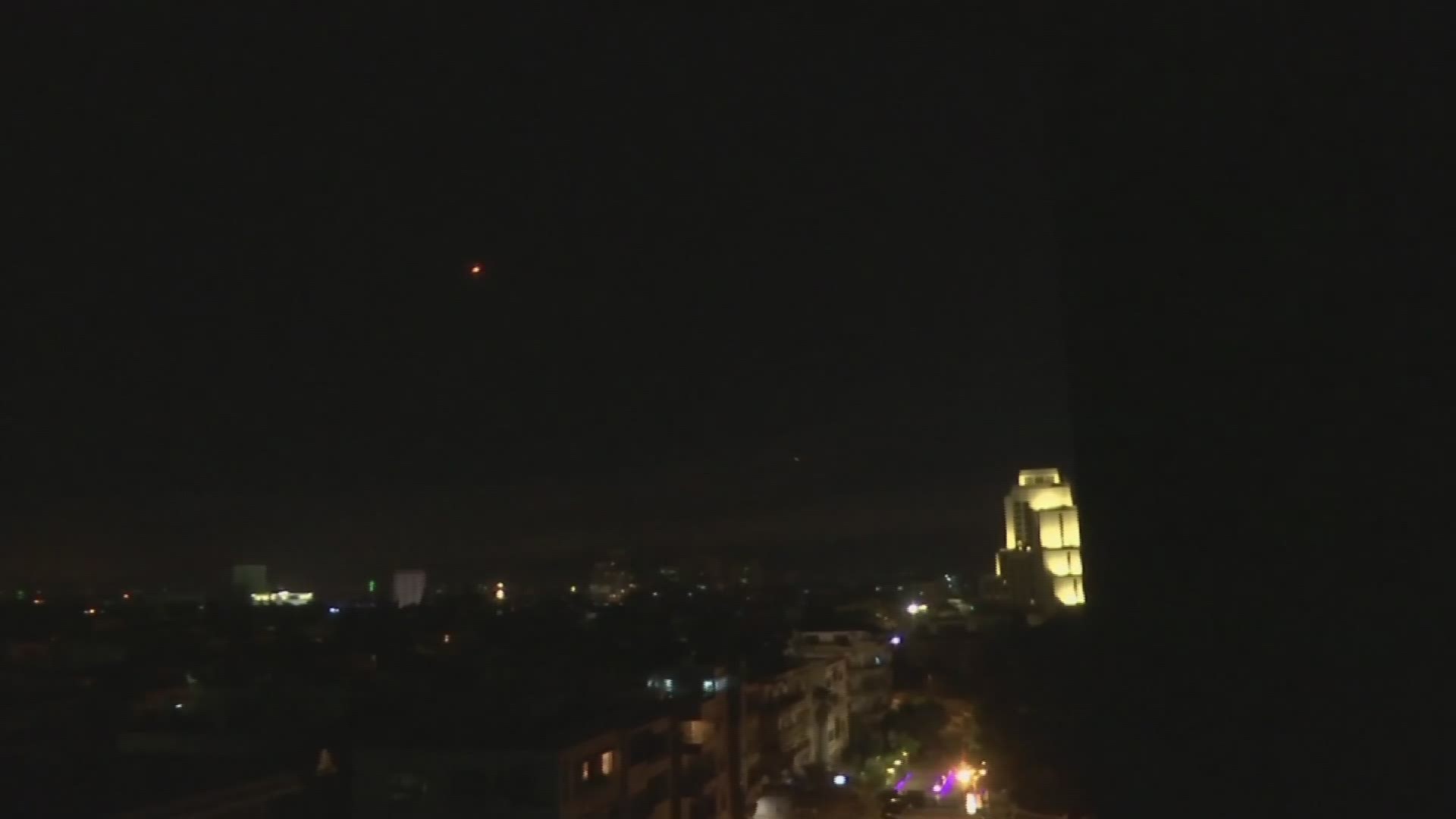 A former officer in Syria’s chemical program, Adulsalam Abdulrazek, said Saturday that the joint U.S., British, and French strikes hit “parts of but not the heart” of the program. He said the strikes were unlikely to curb the government’s ability to produce or launch new attacks.

Speaking from rebel-held northern Syria, Abdulrazek told the Associated Press there were perhaps 50 warehouses in Syria that stored chemical weapons before the program was dismantled in 2013.

In addition, France issued a "national assessment" on the chemical attack based on intelligence reports, information from non-governmental sources, such as relief teams, on the scene and a close examination of information and video from social media.

The report said France considers it "beyond possible doubt" that a chemical attack was carried out in Douma on April 7 and "there is no plausible scenario other than that of an attack by Syrian armed forces as part of a wider offensive" in the area.

It added that Russia has "undeniably" provided active military support for Damascus and "provided constant political cover to the Syrian regime over the employment of chemical weapons."

At an emergency meeting Saturday of the U.N. Security Council, Russian ambassador Vassily Nebenzia said Russian experts on the ground in Douma found no evidence of a chemical attack. He said the alleged attack had been "staged" by foreign intelligence services.

He demanded a vote by the 15-member Security Council on a resolution condemning the "aggression" against Syria by the U.S., Britain and France, but the measure was voted down.

Only three countries — Russia, China and Bolivia —voted in favor of the resolution. Eight countries voted against and three abstained. A resolution needs at least 9 “yes” votes to be approved.

U.N. Secretary-general Antonio Gutteres condemned the use of chemical weapons but sought to reduce tension.

"I urge all member states to show restraint in these dangerous circumstances and to avoid any acts that could escalate matters and worsen the suffering of the Syrian people," he said.

"The pictures of dead children were not fake news, they were the result of the Syrian regime's barbaric inhumanity," she said.

The U.S. envoy said the U.S. had tried numerous efforts to get Syria to give up its chemical weapons program and had no option but to act militarily.

"We are prepared to sustain this pressure if the Syrian regime is foolish enough to test our will," she said, warning that in the event of another chemical attack by Syria, the U.S. is "locked and loaded."

While Russia and Syria sharply condemned the U.S., British and French attack, their initial response was verbal not military.

Russia’s U.S. embassy released a statement warning that the airstrikes will “not be left without consequences.” It said that “all responsibility” rests with Washington, London and Paris.

In a sign that Russia is unlikely to escalate tensions, however, Russian deputy foreign mnister Sergei Ryabkov said Saturday that Moscow is in touch with the three countries that carried out the strike.

"We need to cooperate," Ryabkov told the Russian newspaper Kommersant.

An international inspection team from the Organization for the Prohibition of Chemical Weapons planned to enter the city Saturday to investigate last week's chemical weapons attack.

Syria's President Bashar Assad announced that his country would respond to the allied attack but offered no details.

Credit: LOUAI BESHARA/AFP/Getty Images
Syrians wave the national flag and wave portraits of President Bashar al-Assad as they gather at the Umayyad Square in Damascus on April 14, 2018, to condemn the strikes carried out by the United States, Britain and France against the Syrian regime.&nbsp;

In Damascus immediately after the attack, hundreds of residents — many waving Syrian, Russian and Iranian flags — rushed to the landmark Omayyad square of the Syrian capital. Some clapped their hands and danced, other drove in convoys, honking their horns in defiance.

“We are your men, Bashar,” they shouted, according to the Associated Press.

“This military intervention is very important after what happened,” said Abu Thaa’r, an unemployed 32-year-old from Idleb in a phone interview. “Either these [chemical] weapons are internationally prohibited or not. The air strikes should have happened earlier.”

He was optimistic that American might and US allies would help his country.

“The bombings will change the situation in Syria, especially in terms of limiting the role of Russia,” said Thaa’r. “The bombing maybe will also help in getting rid of the Assad regime and find a solution for the crisis by having new order that we the Syrian people want.”

Leen Hamdan, 20, a university student, lives in Bazreh, the district in Damascus where one of the bombed research centers was located.

“This morning, the people woke up to very loud sounds. They ran to the windows to see what’s happening. It was around 4 am. It lasted for almost an hour. Syrian anti-missiles were shooting back at them,” she said.

“Of course, I am against this strike because it’s an aggression against our country. It’s just an excuse like what happened in Iraq. No country has the right to intervene in other countries. People weren’t afraid at all. Life was normal after the strike, like nothing happened.”

Faten Bahda, 27, a Sunni Muslim woman, lives in Dummar, a western district of Damascus where many Shiite militia from Iraq and Iran have brought their families as they fight rebels.

“Everybody was expecting the strike,” she said.

Her family had already packed their bags. Now, they were trying to flee Syria because they expected Assad to use the airstrikes as a pretext for cracking down on Sunni Muslims like her family.

"The regime will use this as a chance to continue sectarian policies against Sunni civilians,” she said in a phone interview. “Things are going to get worse and we are going to try and get in a car today to get to Beirut.”

The U.S. has about 2,000 troops on the ground in Syria as advisers to a makeshift group of anti-Islamic State fighters known as the Syrian Democratic Forces. They are in eastern Syria, far from Damascus. A U.S.-led coalition has been conducting airstrikes in Syria since September 2014 as part of a largely successful effort to break the militants' grip on both Syria and Iraq.