The couple who went viral for pointing weapons at protesters in front of their St. Louis home agreed to a plea deal Thursday 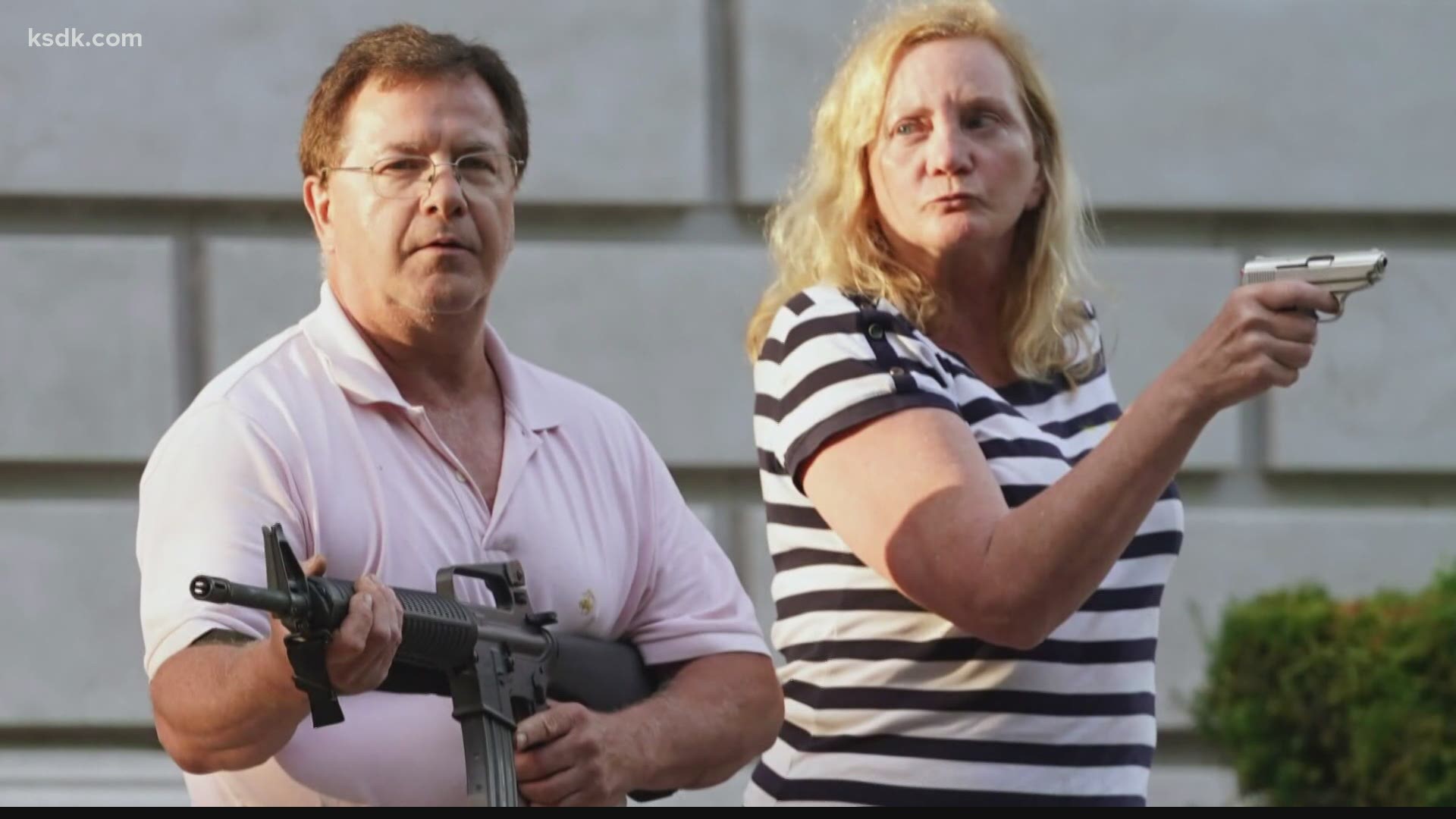 ST. LOUIS — Mark and Patricia McCloskey, the St. Louis couple who were seen pointing guns at protesters in front of their home, pleaded guilty to lesser charges Thursday afternoon.

A judge approved a plea deal from the couple while they were in court for a scheduled hearing.

Mark McCloskey pleaded guilty to a count of fourth-degree assault, which was filed in court Thursday and is a Class C misdemeanor. He was originally charged with unlawful use of a weapon and tampering with physical evidence — both felony charges.

The couple had previously pleaded not guilty and were set to go to trial on Nov. 1.

The plea deal calls for Mark McCloskey to pay a $750 fine. Patricia McCloskey was fined $2,000 to the courts and ordered to pay $10 to the crime victims fund. Both of the weapons pictured in the viral photos and videos were ordered to be turned over to the state and destroyed.

The McCloskeys' lawyer also had asked for the guns to be destroyed, rendered ineffective and then given to a charity for auction as historic artifacts. The judge denied the request.

"This particular resolution of these two cases represents my best judgement of an appropriate and fair dispoition for the parties involved as well as the public good," Special Prosecutor Richard Callahan wrote in a statement.

In accepting the plea deal, Callahan said he took several factors into consideration, including "the age and lack of a criminal record for the McCloskeys, the fact they initially called the police and the fact that no one was hurt and no shots were fired."

The charges stem from an incident in front of their Central West End home last summer.

On June 28, 2020, the McCloskeys were seen in videos and photos pointing guns at protesters who were marching to the home of then-St. Louis Mayor Lyda Krewson's house to call for her resignation.

In the days and weeks that followed, they have received support from conservative politicians. Missouri Gov. Mike Parson and former President Donald Trump decried the charges. Missouri Attorney General Eric Schmitt stepped in to help the McCloskeys. He announced he was trying to get the case dismissed.

"Enough is enough. As Missouri's chief law enforcement officer, I simply will not stand by while Missouri's law is being ignored," he said in a video statement last year, referencing the Castle Doctrine, which allows people in Missouri to defend not only their homes but their property.

The McCloskeys emerged as celebrities in conservative circles. They spoke on video during last summer's Republican National Convention.

Last month, Mark McCloskey announced he was joining the race for U.S. Senate.

This is a developing story that will be updated as 5 On Your Side confirms new information.