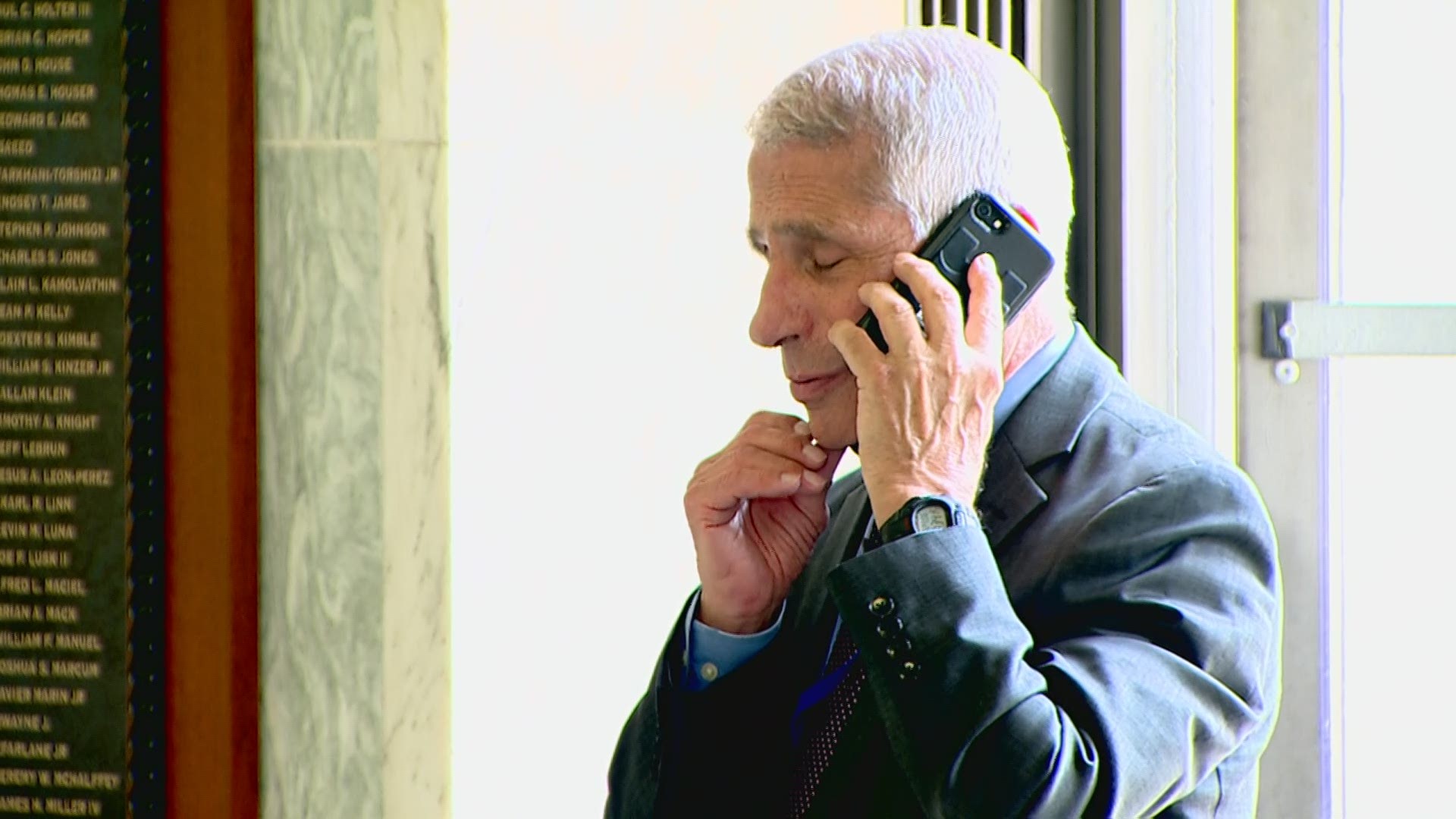 WASHINGTON — The next few weeks are critical to tamping down a disturbing coronavirus surge, Dr. Anthony Fauci told Congress on Tuesday — issuing a plea for people to avoid crowds and wear masks just hours before mask-shunning President Donald Trump was set to hold a campaign rally in one hot spot.

Fauci and other top health officials also said they have not been asked to slow down virus testing, in contrast to Trump’s claim last weekend that he had ordered fewer tests be performed because they were uncovering too many infections. Trump said earlier Tuesday that he wasn't kidding when he made that remark.

“We will be doing more testing,” Fauci, infectious disease chief at the National Institutes of Health, pledged to a House committee conducting oversight of the Trump administration's response to the pandemic.

The leading public health officials spent more than five hours testifying before the committee at a fraught moment, with coronavirus cases rising in about half the states and political polarization competing for attention with public health recommendations.

Fauci told lawmakers he understands the pent-up desire to get back to normal as the U.S. begins emerging from months of stay-at-home orders and business shutdowns. But that has “to be a gradual step-by-step process and not throwing caution to the wind,” he said.

Troubling surges worsened Tuesday in several states, with Arizona, Texas and Nevada setting single-day records for new coronavirus cases, and some governors saying they’ll consider reinstating restrictions or delaying plans to ease up in order to help slow the spread of the virus.

Arizona, where Trump was headed for a rally at a Phoenix megachurch, reported a new daily record of nearly 3,600 additional coronavirus infections Tuesday. Arizona emerged as a COVID-19 hot spot after Republican Gov. Doug Ducey lifted his stay-home orders in mid-May. Last week he allowed cities and counties to require masks in public places and many have done so.

Texas surpassed 5,000 new cases for a single day for the first time — just days after it eclipsed 4,000 new cases for the first time — as America’s largest pediatric hospital began taking adult patients to free up bed space in Houston. The infection rate in Texas has doubled since late May. And Nevada surpassed a record one-day increase for the fourth time in the past eight days. Other states also were experiencing worrisome surges, including Louisiana, Utah and South Carolina.

RELATED: Dr. Fauci says coronavirus turned 'out to be my worst nightmare'

Last week, Vice President Mike Pence published an opinion article in The Wall Street Journal saying the administration's efforts have strengthened the nation's ability to counter the virus and should be “a cause for celebration.”

Another worrisome trend: an increase in infections among young adults. Fauci said while COVID-19 tends to be less severe in younger people, some of them do get very sick and even die. And younger people also may be more likely to show no symptoms yet still spread the virus.

If people say, “’I’m young, I’m healthy, who cares’ — you should care, not only for yourself but for the impact you might have” on sickening someone more vulnerable, Fauci said.

About 2.3 million Americans have been infected and some 120,000 have died, according to data from Johns Hopkins University.

Fauci said he didn’t regret the change in recommendations. Early in the pandemic there was a “paucity of equipment” for health workers “who put themselves daily in harm’s way” and “we did not want to divert” those scarce supplies, he said.

Scientists eventually recommended the general public use cloth masks, after they better understood that people with no symptoms could be spreading the virus — even though they don't offer as much protection as the sophisticated masks reserved for health workers and aren't a substitute for staying 6 feet away from other people.

“Cases are going up in the U.S. because we are testing far more than any other country, and ever expanding. With smaller testing we would show fewer cases! “

Less testing in fact means more infections going undetected. The U.S. was slow in ramping up and currently is testing about 500,000 people a day. Many experts say to control the spread of the virus, it should be testing 900,000 or more.

Brett Giroir, a Health and Human Services assistant secretary, told lawmakers Tuesday the next step is testing patient samples in large batches to stretch limited supplies, which would expand U.S. screening between fivefold and tenfold.

Instead of testing each person individually, health workers would pool samples from 50, 100 or more people from the same office or school, for example. A negative result would clear everyone, while a positive would require each person to be individually re-tested.

And Dr. Robert Redfield, head of the Centers for Disease Control and Prevention, added that it’s now required for workers in nursing homes — hard-hit by the virus — to be tested weekly.

As for the anxiously awaited vaccine, Fauci said he believes “it will be when and not if” it arrives, and he’s “cautiously optimistic” that some vaccine could be available at the end of the year.

More than a dozen vaccine candidates are in various stages of testing around the globe, and the U.S. next month is poised to begin the largest study — in 30,000 people — to get the needed proof that one really works. Meanwhile, countries, including the U.S. under a program called “Operation Warp Speed,” have begun stockpiling millions of doses of different shots, in hopes at least some will prove usable.

Health officials assured lawmakers Tuesday that there won’t be shortcuts on safety.

“We absolutely must maintain regulatory independence and make the right decision for the American people based on the science and the data,” said Food and Drug Administration Commissioner Stephen Hahn.

Democrats blasted Trump for confusing the public with erroneous statements — from testing to masks to unproven treatments — and ignoring the public health experts’ advice.

“It costs lives,” Rep. Kathy Castor of Florida said of Trump’s false claims. She urged the public health specialists to do more to counter the president: “We really expect you to be more outspoken.”

Pushed on whether schools should reopen in August and September, Redfield insisted that will vary not just by state but by school district, depending on how many infections are in a particular area.

“Many jurisdictions will be reopening schools,” and CDC will soon issue some guidelines to help, he said.

Fauci noted that schools should tailor their decisions to local conditions, saying some might need few restrictions and others more. He offered the same advice to colleges, saying they should assume some students will get infected and that there must be ways to keep them and their classmates safe.

RELATED: VERIFY: What is remdesivir?