Boeing acknowledged that a key sensor malfunctioned during the Ethiopian Airlines flight. The company said a new software update would prevent future incidents. 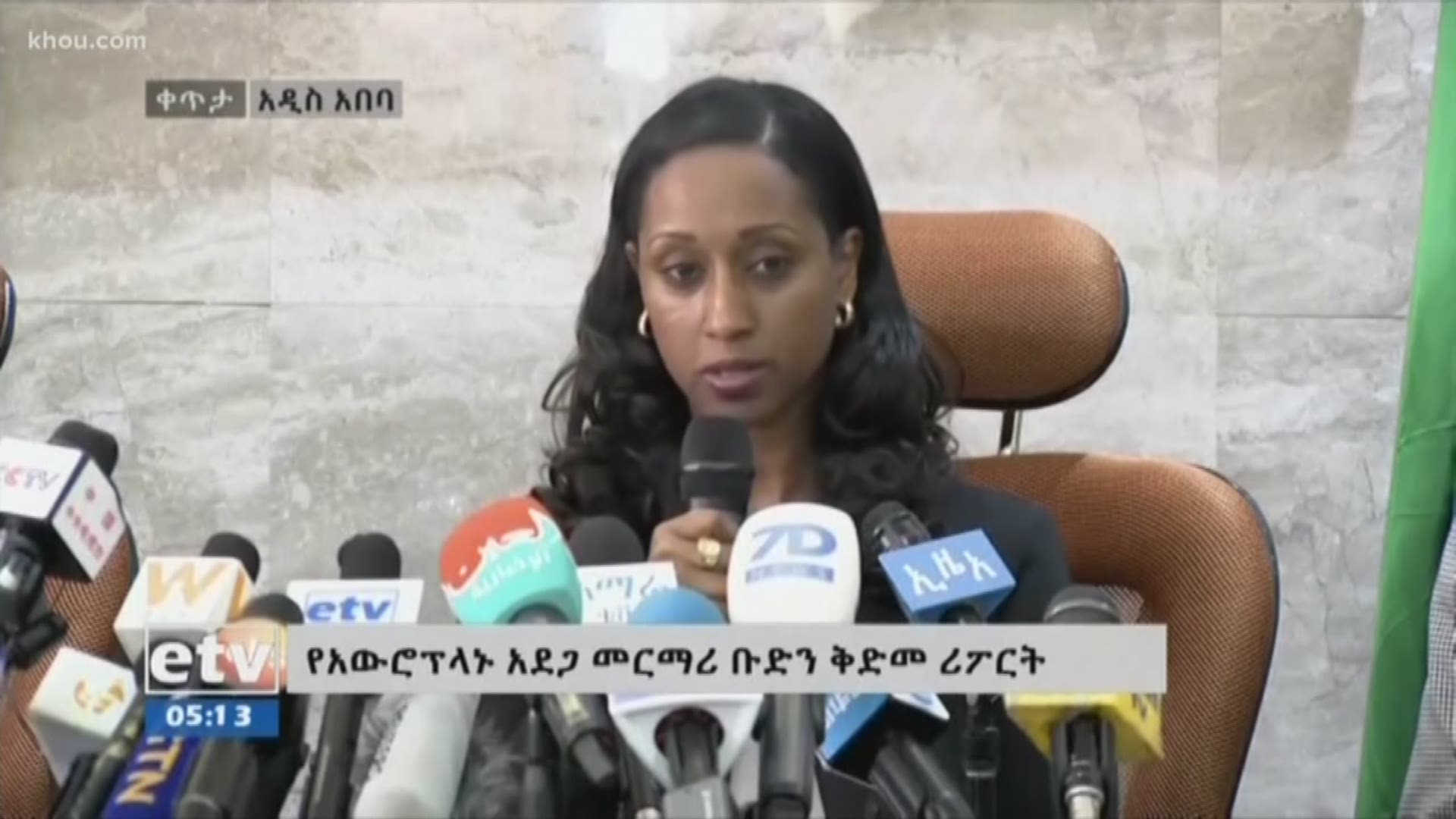 ADDIS ABABA, Ethiopia — A doomed Ethiopian Airlines jet suffered from faulty readings by a key sensor, and pilots followed Boeing's recommended procedures when the plane started to nose dive but could not avoid crashing, according to a preliminary report released Thursday by the Ethiopian government.

The findings draw the strongest link yet between the March 10 crash in Ethiopia and an October crash off the coast of Indonesia, which both involved Boeing 737 Max 8 jetliners. All 346 people on the two planes were killed.

Both planes had an automated system that pushed the nose down when sensor readings detected the danger of an aerodynamic stall, and it now appears that sensors malfunctioned on both planes.

Boeing acknowledged that the sensor malfunctioned and CEO Dennis Muilenburg said Thursday a new software update would prevent future incidents. "It's our responsibility to eliminate this risk," Muilenburg said in a video statement. "We own it, and we know how to do it."

Thursday's preliminary report, based on flight data and cockpit voice recorders on the Ethiopian Airlines jetliner, showed that the faulty sensor touched off a series of events that caused the pilots to lose control of the plane. The report from Ethiopia's Aircraft Accident Investigation Bureau said the sensor problems began about a minute after the plane was cleared for takeoff.

It said air speed and altitude values on the left side of the Ethiopian Airlines 737 Max conflicted with data from the right sensor, causing flight control problems. Eventually the pilots couldn't keep the plane from plummeting to the ground, killing all 157 people on board.

The problems are similar to those reported on the Indonesian Lion Air flight that crashed last October. Investigators found that software on that plane took readings from the sensor and pointed the nose down. Thursday's revelations raise questions about repeated assertions by Boeing and U.S. regulators that pilots could regain control in some emergencies by following steps that include turning off an anti-stall system designed specifically for the Max, known by its acronym, MCAS.

The Max has been grounded worldwide pending a software fix that Boeing is rolling out, which still needs to be approved by the U.S. Federal Aviation Administration and other regulators.

In a statement, Boeing said that to make sure unintended activation of the MCAS system doesn't happen again, it is developing software and "associated comprehensive pilot training" for the Max. The software update, Boeing said, adds layers of protection and will stop erroneous data from activating the system.

Ethiopian investigators did not specifically mention the MCAS, but recommended that Boeing review "the aircraft flight-control system related to the flight controllability." They also recommended that aviation officials verify that issues have been adequately addressed before allowing the planes to fly again.

At a news conference, Ethiopia's Minister of Transport Dagmawit Moges said the Ethiopian Airlines crew "performed all the procedures repeatedly provided by the manufacturer but was not able to control the aircraft."

However, it wasn't clear whether the Ethiopian pilots followed Boeing's recommendations to the letter.

The pilots initially followed Boeing's emergency steps by disconnecting the MCAS system by switching off power to a stabilizer on the tail, the report said. But they turned the system back on 32 seconds before hitting the ground and tried unsuccessfully to use it to point the nose up. Boeing's procedures instruct pilots to leave the MCAS disconnected and continue flying manually for the rest of the flight.

The report said multiple alarms went off as the pilots struggled to control the plane, indicating an even more complex situation than in the Lion Air crash, said William Waldock, a professor of safety science at Embry Riddle Aeronautical University. "It's similar in a lot of ways but perhaps more extreme," he said. "It seems likely they've got more things going on at once in a shorter time period."

Family members of crash victims said they were unsettled by the report's findings.

"Today's preliminary report suggests Boeing could have done better in notifying the problem with the aircraft system early on," said Konjit Shafi, whose younger brother, Sintayehu Shafi, died in the crash. "This is causing us a great deal of pain. It is so sad to learn that our loved ones would have been spared if this problem was detected on time."

Meanwhile, the family of a 24-year-old American woman killed in the crash sued Boeing on Thursday. The complaint, which also names Ethiopian Airlines and parts maker Rosemount Aerospace as defendants, alleged negligence and civil conspiracy among other charges.

"Blinded by its greed, Boeing haphazardly rushed the 737 MAX8 to market" and "actively concealed the nature of the automated system defects," the lawsuit filed on behalf of the family of Samya Stumo alleged. Stumo is a great grand-niece of consumer advocate Ralph Nader.

Nader called on consumers to boycott the MAX 8 and blasted the FAA for delegating so much responsibility in certifying the plane was safe to Boeing.

"Those planes should never fly again," Nader said. "If we don't end the cozy relationship between the patsy FAA ... and the Boeing Company, 5,000 of these fatally flawed planes will be in the air all over the world with millions of passengers."

Boeing is the focus of investigations by the U.S. Justice Department, the Transportation Department's inspector general and congressional committees. Investigations are also looking at the role of the FAA, which certified the Max in 2017, and declined to ground it after the first deadly crash in October. The agency was also reluctant to ground the planes after the Ethiopian Airlines crash and was among the last agencies to do so.

The FAA, which must certify the 737 Max is safe before it can go back into the air, said in a statement that the investigation is still in its early stages.

"As we learn more about the accident and findings become available, we will take appropriate action," the agency said.