Biden: Trump 'consumed' by ego, not leading during crisis

In a speech addressing the civil unrest across America, Joe Biden said 'the moment has come' to deal with systemic racism and deeply ingrained economic inequality. 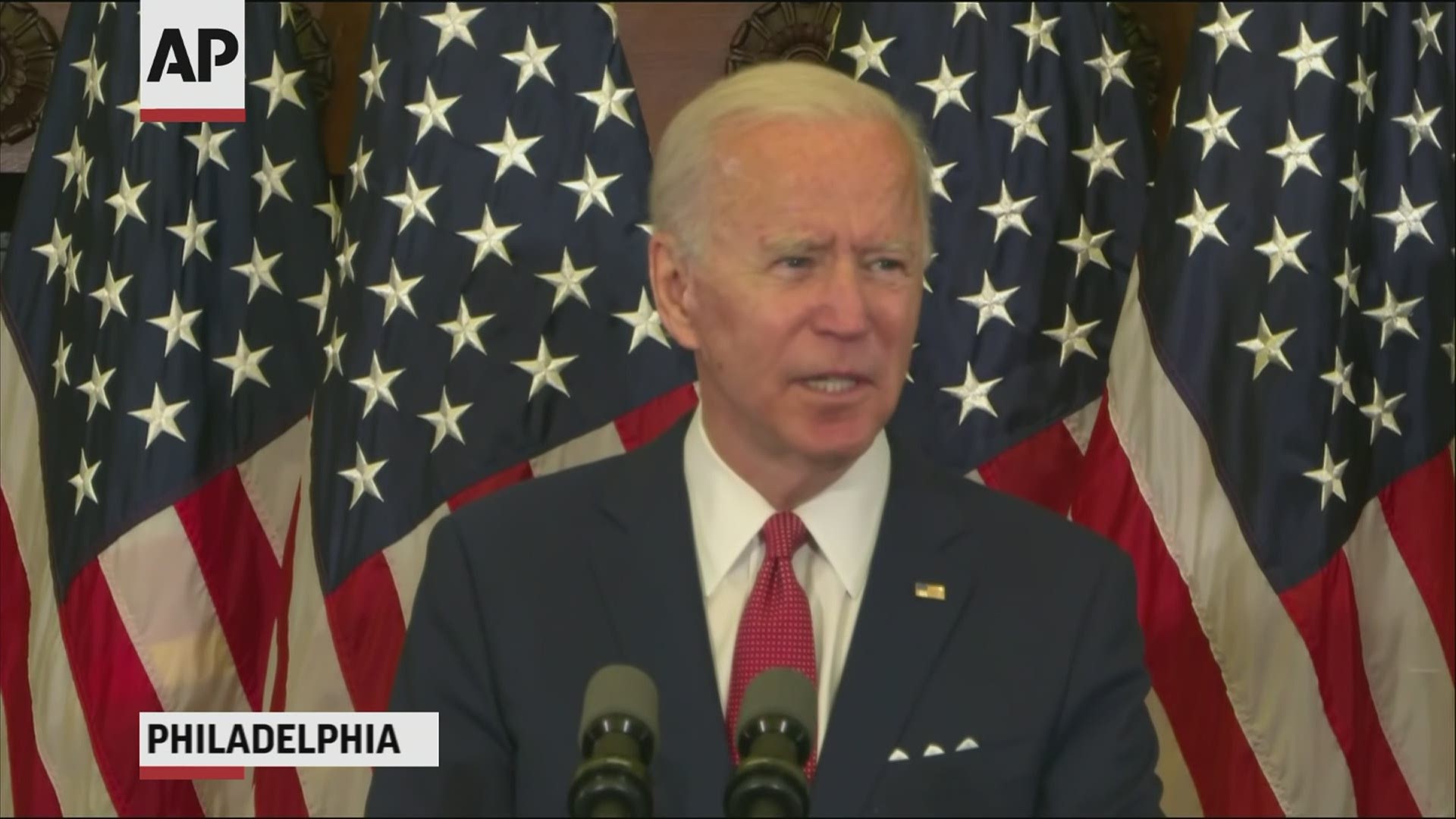 PHILADELPHIA — Joe Biden mounted one of his most aggressive attacks against President Donald Trump on Tuesday, deriding the commander in chief's disregard of core constitutional values and blistering him for being “more interested in power, than in principle.”

“He thinks division helps him,” the presumptive Democratic nominee said in a speech at Philadelphia’s City Hall. “This narcissism has become more important than the nation’s well-being.”

Biden seized on police driving back peaceful protesters near the White House on Monday so Trump could briefly pose with a Bible before nearby St. John’s Church.

“If he opened it instead of brandishing it, he could have learned something," Biden said as he chided authorities for using “tear gas and flash grenades in order to stage a photo op."

Biden said Trump "might also want to open the U.S. Constitution. If he did, he’d find the First Amendment. It protects the right of the people peaceably to assemble, and to petition the government for a redress of grievances.”

Biden’s address marked a new phase of a presidential campaign that had been effectively frozen for two-plus months by the spread of the coronavirus. The former vice president is now emerging from his Delaware home to confront Trump every day — and using in-person appearances to offer direct competition with the president, rather than relying on virtual events that often failed to garner a lot of attention.

It was the third consecutive day that Biden made a public appearance and the first time he's been out of the state since March. His remarks were carried live on the three major cable news networks.

Biden delivered the remarks as upheaval in the wake of George Floyd’s death has spread around the country. While Biden spoke, the National Guard maintained a visible presence to defend public buildings as Philadelphia continues to face sustained violent protests. Several buildings adjacent to City Hall, including banks, convenience stores and hotels, were boarded up.

He spoke of the “tug of war between the American ideal that we are all created equal and the harsh reality that racism has long torn us apart.”

“The honest truth is both elements are part of the American character," he said.

Since the early days of his candidacy, Biden has framed the election as a “battle for the soul of the nation.” He went into greater detail on Tuesday about what that meant and the questions voters should ask themselves.

“I ask every American to look at where we are now, and think anew: Is this who we are?” he said. “Is this who we want to be? Is this what we pass on to our kids’ and grandkids’ lives? Fear and finger-pointing rather than hope and the pursuit of happiness? Incompetence and anxiety? Self-absorption and selfishness?”

The tone was part of Biden's effort to cast himself as a “consoler in chief" in stark contrast to Trump's blunt, confrontational style. While he said his anguish over the death of his son Beau Biden five years ago from cancer isn't the same as the sadness felt by those protesting police brutality, he said he understood the hopelessness that can come with grief.

“Like many of you, I know what it’s like to grieve,” Biden said. “I know what it feels like when you’re thinking you can’t go on.”

He said “bad cops should be dealt with severely and swiftly” and offered examples of how he might ease racial tensions and govern.

He called on Congress to act now on legislation that would place a federal ban on police using choke holds. Biden also promised to increase access to health care and improve the pay of first-responders and other workers who have stayed on jobs deemed essential during the pandemic, should he win the presidency.

But Biden's speech was perhaps most notable for its ferocity. He accused the president of being more worried about himself than the nation at a time when it “is crying out for leadership.”

“This president today is part of the problem and accelerates it,” Biden said, adding that Trump is “consumed with his blinding ego.”

Biden also offered a stark departure from Trump, who tweeted before Biden spoke that Washington “had no problems last night” and cited “many arrests,” as well as “overwhelming force” and “Domination” for which he thanked himself.

Trump has embraced the language of confrontation and war, seeking to be a “president of law and order," and betting that voters will want a more forceful approach at a time of national tumult and racial unrest.

Katrina Pierson, a senior adviser to the president's reelection campaign, said Biden's speech “obviously made the crass political calculation that unrest in America is a benefit to his candidacy.”

“President Trump is restoring the nation to order and is clearly the leader we need to return the country to peace and prosperity,” she said in a statement.

Despite his more confrontational approach, Biden was direct about the limits of his ability to singularly reconcile the nation's differences. He was careful to note that his administration won't be able to fix everything, especially not all at once.

“I know that the presidency, that's a very big job," he said. “Nobody will get it right every time and I won't either," Biden said.

But he vowed not to “traffic in fear and division."

“I won't fan the flames of hate,” he said. "I'll seek to heal the racial wounds that have long plagued our country, not use them for political gain.”