The private meeting between the two presidents on Thursday will bring together the oldest sitting president and the longest-lived former president in history. 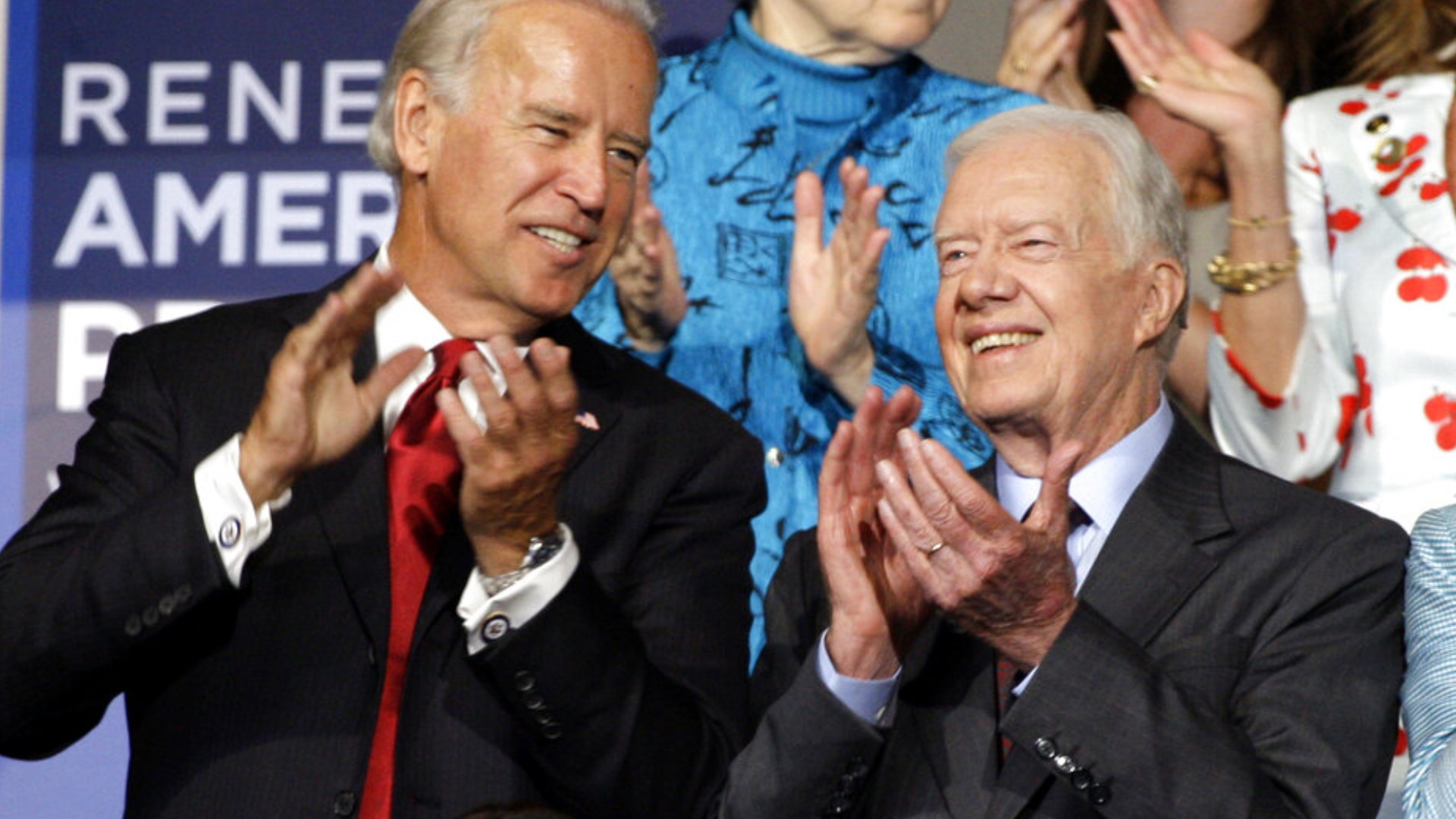 PLAINS, Ga. — President Joe Biden was a first-term Delaware senator in 1976 when he endorsed an upstart former Southern governor for the presidency over the party’s Northern establishment players.

Biden came full circle Thursday, visiting Jimmy Carter and his wife, Rosalynn, in tiny Plains, Georgia, where the 96-year-old former president and 93-year-old former first lady have lived for most of their lives.

“He showed us throughout his entire life what it means to be a public servant,” Biden, 78, said of Carter for a new documentary, “CARTERLAND,” set to debut this weekend as part of the Atlanta Film Festival.

The private meeting on Thursday brought together the oldest sitting president and the longest-lived former president in history. It was their first in-person encounter since Biden took office. The two presidents didn't appear together outside the Carters' home. Biden was seen with Rosalynn Carter at the door as he departed. The former first lady stood alongside him supported by her walker.

Many of the 650 residents of Plains turned out to see Biden's motorcade.

The Carters were unable to attend the Jan. 20 inauguration, the first they’d missed since Jimmy Carter was sworn in as the 39th president in 1977. The Carters have retreated from public life for most of the coronavirus pandemic, but they now are vaccinated and recently began attending church services again at Maranatha Baptist Church, where the former president taught Sunday school for decades.

Biden's visit comes after Carter’s vice president, Walter Mondale, died April 19 at the age of 93. Carter and Biden both spoke to Mondale by phone in the days before his death.

In his “CARTERLAND” remarks, recorded last week and made available to The Associated Press by producers Will and Jim Pattitz, Biden credits Mondale and Carter as formative figures in his political career.

Biden noted Mondale changed the vice presidency into the kind of active role Biden would go on to play during his two terms in the post. “When President (Barack) Obama asked me to consider being his vice president, I said I had to go home and talk about it,” Biden said. “Fritz was my first call outside of my family.”

Recalling the seeds of his friendship with Carter, Biden named the date — March 25, 1976 — he traveled to Wisconsin to make the case that the devout Baptist then from the party’s moderate wing was the right candidate to defeat President Gerald Ford.

“Some of my colleagues in the Senate thought it was youthful exuberance,” Biden said with a laugh. “I was exuberant, but as I said then, ’Jimmy’s not just a bright smile. He can win and he can appeal to more segments of the population than any other person. ... Gov. Carter proved me right.”

Carter didn’t endorse anyone in the 2020 primary that included Biden. But the former president warned Democrats not to veer too far left and risk alienating moderate voters needed to defeat President Donald Trump.

There’s plenty of irony in both men’s political calculations.

Carter wrested the 1976 nomination from the liberal Northeastern establishment and then clashed with congressional Democrats who didn’t like his technocratic, penny-pinching approach. In 1980, he endured a bruising primary challenge from liberal icon Ted Kennedy, the Massachusetts senator, and limped into a general election campaign that ended with a rout by Republican Ronald Reagan.

By 2016, the aging former president would vote for democratic socialist Bernie Sanders in the Democratic primary over the more moderate Hillary Clinton, a choice Carter wouldn’t disclose until after Clinton lost the general election to Trump.

Biden, meanwhile, seemed overshadowed by Sanders and other ascendant progressives early in the 2020 campaign. Biden defined his campaign mostly as a moral case against Trump, whom he described as a threat to “the soul of the nation.” The approach helped him flip several states in the general election, including Georgia, by pairing a surge in liberal turnout with support from the independents and moderate Republicans who Carter had correctly argued could be part of a winning Democratic coalition.

Yet now, Biden is pushing a legislative agenda that would mean the largest expansion of the federal government since the adoption of Medicare, Medicaid, the Civil Rights Act and the Voting Rights Act during the mid-1960s, before either Carter or Biden had sought statewide office.

Carter retreated from partisan politics for years after he left the White House in 1981.

He and Rosalynn Carter focused on building The Carter Center into an organization with global reach in public health, humanitarianism and diplomacy. The center has monitored more than 110 elections in 39 countries since 1989, and it’s on the cusp of eradicating Guinea worm, a parasitic infection attributed to poor drinking water in developing nations.

In recent decades, Carter has waded more directly into politics. He’s criticized multiple U.S. administrations for not engaging with North Korea, arguing that a hard line won't bring the autocratic, isolated nation into the world order. That left Carter somewhat aligned with Trump, even as the 39th president slammed the 45th president as a serial liar and threat to democracy.

For years, Carter has criticized U.S. military spending, arguing it can wreak havoc globally while short-changing the kind of domestic investments competitor nations, especially China, are making. He used his 2004 speech at the Democratic National Convention to blister then-President George W. Bush for invading Iraq in 2003 — a move Biden had enabled with his vote for a war powers resolution in the Senate.

Blasting big money in politics, Carter also has called the U.S. “an oligarchy” rather than a fully functioning “democracy.”

That outspoken approach has meant roller-coaster relationships with his successors. But it leaves Carter with plenty to talk about with Biden, who as recently as Wednesday night in his first address of Congress framed his trillions in proposed infrastructure, education, health care and other spending as necessary to keep pace with Beijing.

“We are in a competition with China to win the 21st century,” Biden said.