As he prepared to die, he had a party and got married

Robert Fuller used Washington state's Death with Dignity law to end his own life. But first, he lived it up. 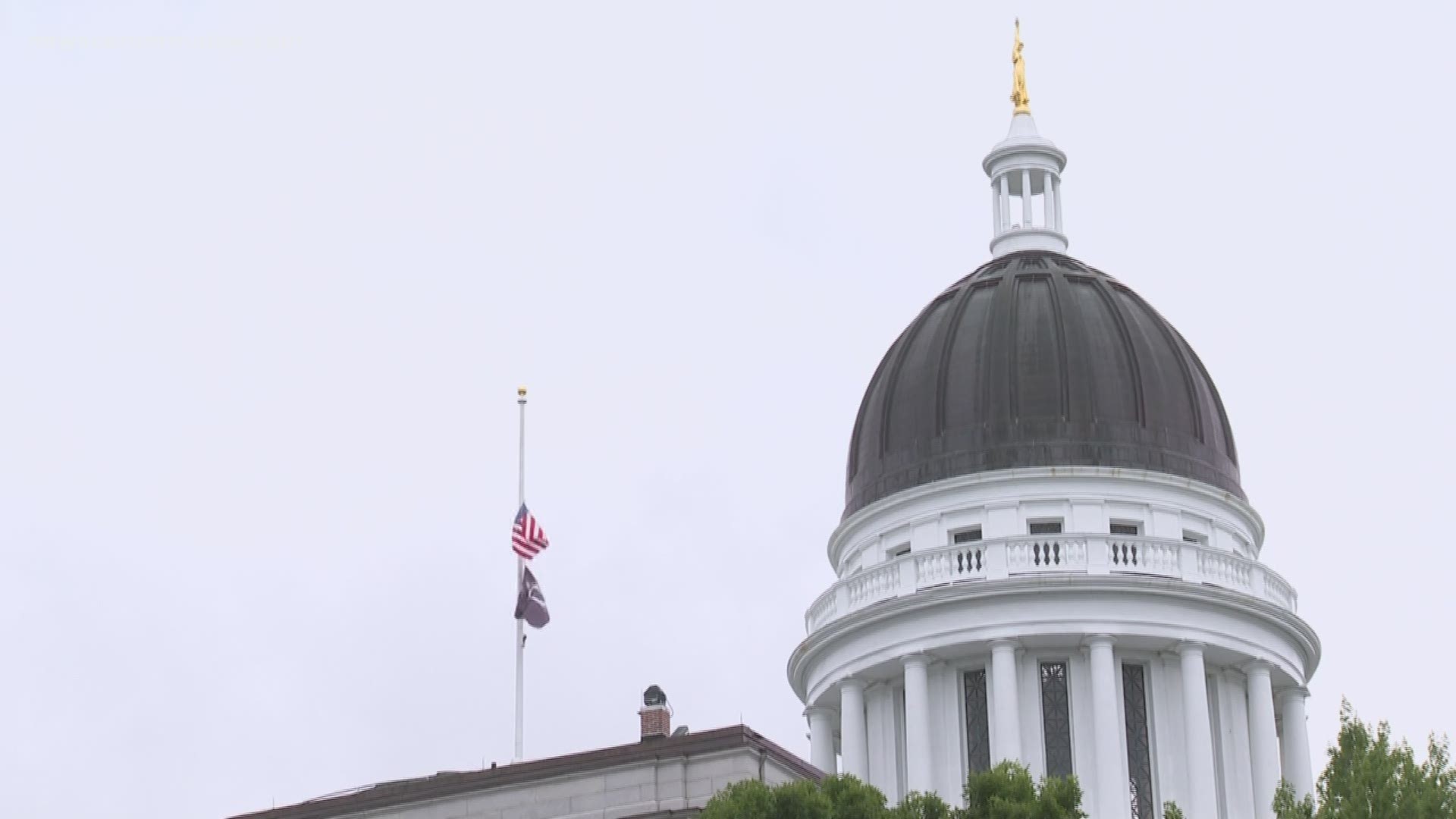 SEATTLE — Editor's note: The video above is from July 2019 report about residents of Maine trying to repeal the state's Death with Dignity law.

The day he picked to die, Robert Fuller had the party of a lifetime.

In the morning, he dressed in a blue Hawaiian shirt and married his partner while sitting on a couch in their senior housing apartment. He then took the elevator down three floors to the building's common room, decorated with balloons and flowers.

With an elaborately carved walking stick, he shuffled around to greet dozens of well-wishers and friends from across the decades, fellow church parishioners and social-work volunteers. The crowd spilled into a sunny courtyard on a beautiful spring day.

A gospel choir sang. A violinist and soprano performed "Ave Maria." A Seattle poet recited an original piece imagining Fuller as a tree, with birds perched on his thoughts.

And when the time came, "Uncle Bob" banged his walking stick on the ceiling to command attention.

"I'll be leaving you in a little over an hour," he announced.

A sob burst. Fuller turned his head sympathetically toward its source.

Later that afternoon, Fuller plunged two syringes filled with a light brown liquid — a fatal drug cocktail mixed with Kahlua, his favorite alcohol — into a feeding tube in his abdomen. He was one of about 1,200 people who have used Washington's Death with Dignity Act to end their lives in the decade since it became law.

As such laws grow more popular — they have taken or will take effect in Hawaii, New Jersey and Maine this year, making it nine states where "aid in dying" is allowed — more people who are suffering and terminally ill have the option of hastening their death. Those who do cite a variety of reasons — fear of losing their autonomy or dignity, becoming a burden to loved ones, becoming unable to enjoy life — but they are united in a desire to take control of their own ends.

The Associated Press documented one man's story in the days surrounding his death, spending time with him and those around him. In an interview the day before he died, Fuller said he wanted to demonstrate for people around the country how such laws work.

For him, the decision to end his life at 75 was, if not easy, never in doubt.

A LONG RELATIONSHIP WITH DEATH

Death did not frighten Bob Fuller. It had been with him since he was young.

He grew up in Hooksett, New Hampshire, the second of four children. His father was a furniture maker, his mother a homemaker. He described their relationship as loveless and unhappy, but he was close to his ailing grandmothers and would frequently sit with them.

When he was 8, he said, his father's mother, severely depressed, drowned herself in the Merrimack River after leaving her glasses and slippers on the shore. He recalled seeing her body in the water, a trauma that began his long, matter-of-fact relationship with death.

He called it his "default setting": "If life gets painful, you go to the Merrimack River."

Fuller's friends described him as playful, wise, witty and vibrant, a wonderful singer and the type of person who collected friends everywhere. He sponsored people in recovery from drug and alcohol addiction after quitting drinking in 1983. In retirement he ran a voucher program — now named for him — through the LGBTQ support organization Peer Seattle that provided music and theater tickets to those who couldn't afford them.

As a former nurse, he was like an unofficial assistant manager at his building, helping residents change bandages or picking them up when they fell in their kitchens.

But his old default setting persisted through much of his life, a sort of undercurrent to the way he lived "out loud," as he put it.

He tried to kill himself in 1975, he said, when he was drinking too much and despondent after his marriage ended; he had revealed to his wife he was gay. Fuller had moved to Seattle for nursing school, and he was working as a psychiatric nurse at Harborview Medical Center when he swiped handfuls of narcotics, went to a nearby park, swallowed them and lay down to die.

He called for help when it started raining, he said. He didn't want to die cold and wet.

In the mid-1980s, Fuller helped care for friends suffering from AIDS and administered a fatal dose of medication to one at the end of his fight, he said. But his own sexual behavior was so risky it verged on suicidal. He contracted AIDS, then lived long enough to benefit from the AIDS cocktail when it was developed in the mid-1990s.

"I think I wanted to get AIDS," he said. "All my friends were dying."

For critics, that sort of fatalism is a key problem with aid-in-dying laws. Some AIDS patients who chose to end their lives might have lived long enough to benefit from the AIDS cocktail as Fuller did, said Wesley J. Smith, an author and prominent critic of the laws.

But beyond that, to allow people to hasten their deaths represents an abandonment, a signal to the terminally ill that their lives are not worth living, he said.

"We should be very concerned that we are normalizing suicide in our society, especially at the very time during which, practically out of the other side of our mouth, we are saying suicide is an epidemic," Smith said.

Whether such deaths do constitute suicide is a semantic debate. In Washington and other states with aid-in-dying laws, coroners are forbidden from categorizing the deaths as suicides; instead, they list natural causes. Opponents, including the American Medical Association, maintain that "assisted suicide" is more accurate.

'WHY SHOULD I SUFFER?'

Fuller had long thought that if he were ever to become terminally ill, he would want to control his death. That notion was reinforced two years ago, when a woman in his building used Washington's law, he said. She explained the requirements for him, including that two doctors must certify you have less than six months to live, that you must be competent, and that you must request the fatal drugs twice verbally and once in writing, witnessed by two people.

Last summer he went to the doctor with a sore throat. It turned out to be an aggressive cancer at the base of his tongue. He began a round of chemo but abandoned it, saying it was killing his soul. Instead, early this year, he picked a date — May 10 — and began planning.

"Why should I suffer?" he said. "I'm totally at peace with this."

In the ensuing months he put his affairs in order. He went up the Space Needle and took a road trip down the Pacific Coast Highway with his partner and caretaker of the past few years, Reese Baxter.

Credit: AP
In this May 10, 2019, photo, Reese Baxter, left, puts a ring on the finger of Robert Fuller during their wedding at their home in Seattle. Later that day, Fuller plunged two syringes filled with a fatal drug cocktail into a feeding tube in his abdomen. He's one of about 1,200 people who have used Washington's Death with Dignity Act to end their lives in the decade since it became law. (AP Photo/Elaine Thompson)

The cancer was closing his throat, making it difficult to eat, but he had the flan from the Mexican restaurant around the corner one last time.

On Facebook he described his pain, his falling weight and his final visits with old friends.

Fuller began returning more often to the Catholic church he had long attended. His spiritual views were hardly orthodox — he considered himself a shaman, and described his impending death as a state of "perpetual meditation" — but Seattle's St. Therese Parish was known for accommodating a range of beliefs. Fuller was beloved there, and he craved the community. He had sung in the gospel choir and read scriptures from the lectern during services, sometimes delivering insightful or funny remarks off the cuff, said Kent Stevenson, the choir's director.

Stevenson credited the "tenacity and clarity" of Fuller's choice.

"It was hard to even cry because he was so forthcoming and so sober about it," Stevenson said. "He was just so outrageously unique and such a character, this was completely in keeping with who Bob was."

The Roman Catholic Church opposes aid-in-dying laws, citing the sanctity of life. But Fuller's decision was widely known and accepted among the parishioners. At the service where he received his last communion on May 5, the Rev. Quentin Dupont brought over a group of white-clad children who were receiving their first communion.

They raised their arms and blessed him.

As he hugged friends and sang along at his party, Fuller appeared serene, betraying no sign of reconsideration. He also kept his sense of humor, greeting a reporter by saying: "I'm dying to read your story."

He invited those who wished to be with him for his death to come upstairs. Friends packed into his bedroom. He changed into satin, navy blue pajamas and lay down in his bed.

"It's hard to be here, but I wouldn't miss it," said Yvonne Kilcup, of Tacoma, whom Fuller began sponsoring in recovery 24 years ago. "He gave me a good solid kick in the butt. Now I'm going to hold his feet as he passes."

In the kitchen, two volunteers with the nonprofit End of Life Washington mixed the drugs and Kahlua in a glass measuring cup. They said they considered themselves to be like midwives, helping usher people out of the world instead of into it.

"You know if you do this, if you put this in your system, you'll go to sleep and you won't wake up?" one, Stephanie Murray, told him as she delivered the syringes.

"I do," Fuller answered.

After a few moments of tense quiet, he led his friends in singing, "I'm so glad we had this time together," the sign-off from the old Carol Burnett television show.

His eyes closed for longer and longer periods.

And then, he wasn't.

If you or someone you know may be struggling with suicidal thoughts you can call the U.S. National Suicide Prevention Lifeline at 800-273-TALK (8255) any time of day or night or chat online. Crisis text line provides 24/7 support (Text 741-741)