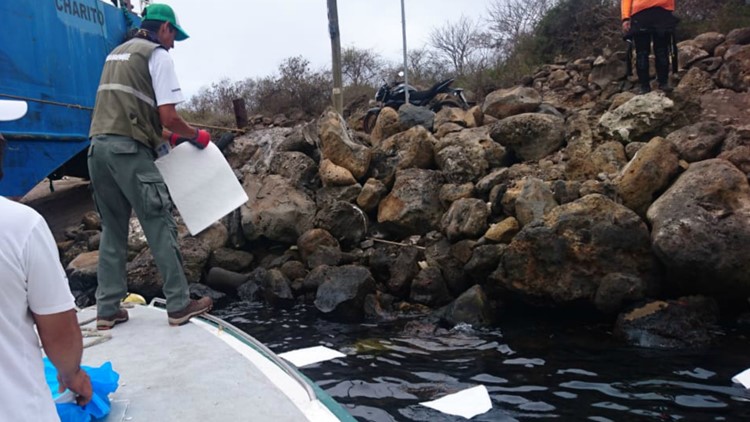 Photo by: Galapagos National Park
Workers cleaning up oil from a 600 gallon diesel spill in the Galapagos Islands, December 2019

They’re an ecological pearl and a UNESCO World Heritage site.

The Galapagos Islands are home to creatures that can’t be found anywhere else on Earth. It’s the place where Charles Darwin’s theory of evolution was born.

Now, those animals are facing the effects of an oil spill.

Approximately 600 gallons of diesel leaked into the ocean Sunday after a cargo boat tipped over, according to the BBC. A cell phone video shows a large container being lowered onto the ship’s deck before it slips off the side – and brings everything with it into the crystal blue water.

The people working on the cargo boat can be seen jumping off. There are no reports of any injuries.

You can watch the video here:

CNN reports the spill happened at San Cristobal island – hundreds of miles off the coast of Ecuador.

Crews are working to contain the oil, but environmental groups say the spill is the unavoidable result of allowing tourists to visit the Galapagos Islands.

In a response to an official tweet, SOS Galapagos called the shipping of supplies to the islands "illegal and dangerous."

RELATED: House approves bill to block drilling in the Gulf of Mexico near Florida