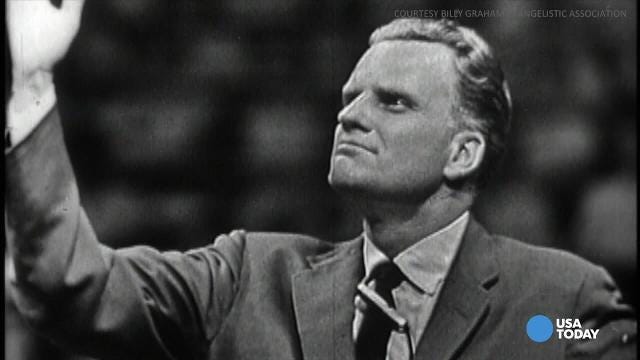 Billy Graham often was called upon to soothe the nation in stressful times. But his words of wisdom resounded no matter what the situation. And he made clear that this Earth was just a way station: “My home is in heaven. I’m just passing through this world.”

Here's a collection of notable quotes during his life:

On the journey to heaven:

“The Bible says that as long as we are here on Earth, we are strangers in a foreign land. There are enemies to be conquered before we return home. This world is not our home; our citizenship is in heaven.”

"Some of you today are going through heartache and grief so intense that you wonder if it will ever go away. But I want to tell you that our God cares for you and for your family and for your city. For God loves you, and he shares in your suffering."

Credit: Robert Deutsch, USA TODAY
The Rev. Billy Graham sit on the porch of his mountaintop cabin in Montreat, N.C., in 2005.

Upon receiving the Congressional Gold Medal, May 2, 1996: Graham spoke of sin and repentance, saying:

"We are a society poised on the brink of self-destruction. But what is the real cause? What is the problem? The problem is within ourselves."

"We've always needed God from the very beginning of this nation, but today we need him especially. We're facing a new kind of enemy, we're involved in a new kind of warfare, and we need the help of the spirit of God."

Legacy: How Franklin Graham took the reins from a legendary preacher

Crusades: How the evangelist reached millions

Books: A look at all the books Billy Graham wrote

The unknown: 16 lesser-known facts about the legendary evangelist

Gratitude: Why almost everyone wants to say thank you to Billy Graham

Alluding only obliquely to the Watergate scandal and Nixon's resignation, Graham focused on another "more personal," "more intimate" and "more human side" to Richard Nixon.

"He always had a compassion for people who were hurting."

Far from the crowds, he was frank and open about his own history and views. In interviews with USA TODAY in 1998 and 2005 he spoke of:

"I will be a friend to men of both parties, but I would never say that I was, even indicated that I was, for one or the other. I am for God. I don't think there's any hope for the world except in God."

"I would not call myself today a fundamentalist. I have changed. I fellowship with all groups who claim to know God. I have warm friends among Jewish leaders and Catholic leaders and the various Protestant denominations that in the earlier years of my ministry, I thought I was a heretic or something if I went out of my way to greet them."

"It's going to be quite a revealing thing at the Last Judgment when we see everyone standing naked before God."

"The Lord said, 'I will never forsake you.' No matter how sinful we are, how bad we are, God loves us. ...I believe he sent his son, Jesus Christ, to die on the cross for us because he loves us, and he doesn't have any termination to that love."