The Rev. Billy Graham, whose sermons were broadcast in churches around the country, has died, a spokesman confirmed to CBS News. He was 99.

The world's best-known evangelist, the Rev. Billy Graham, has died. He was 99.

From the gangly 16-year-old baseball-loving teen who found Christ at a tent revival, Graham went on to become an international media darling, a preacher to a dozen presidents and the voice of solace in times of national heartbreak. He was America's pastor.

Graham retired to his mountain home at Montreat, N.C., in 2005 after nearly six decades on the road calling people to Christ at 417 all-out preaching and musical events from Miami to Moscow. His final New York City crusade in 2005 was sponsored by 1,400 regional churches from 82 denominations.

Presidents called on Graham in their dark hours, and uncounted millions say he showed them the light. He took his Bible to the ends of the Earth in preaching tours he called "crusades." Even now, anywhere a satellite, radio, TV, video or podcast can reach, his sonorous voice is probably still calling someone to Christ.

"Billy Graham was America's pastor. His faith in Christ and his totally honest evangelical spirit inspired people across the country and around the world. I think Billy touched the hearts of not only Christians, but people of all faiths, because he was such a good man. I was privileged to have him as a personal friend. He would come to Maine to visit with Barbara and me, and he was a great sport. He loved going really fast in my boat. I guess you could say we had that in common. Then we would come home and talk about life. He was a mentor to several of my children, including the former president of the United States. We will miss our good friend forever."

Though Graham's shoes could likely never be filled, his son, Franklin, has taken over in some aspects—leading The Billy Graham Evangelistic Association and becoming a confidant of President Donald Trump, including speaking at his inauguration.

NEW: President Trump calls Rev. Billy Graham "a very special man" who "will be missed by Christians and all religions" https://t.co/7HbrY3Ow5M pic.twitter.com/nYuynYH8Kx

But Franklin's message has swayed from his father's, leaving a mixed legacy for the Graham name.

Franklin has mocked both Islam and LGBT rights. He uses his following on social media to raise funds for "persecuted Christians," boycotts businesses that use gay couples in advertisements and blasts the separation of church and state as as the godless successor to Cold War communism.

But his father's words for years offered peace and perspective. 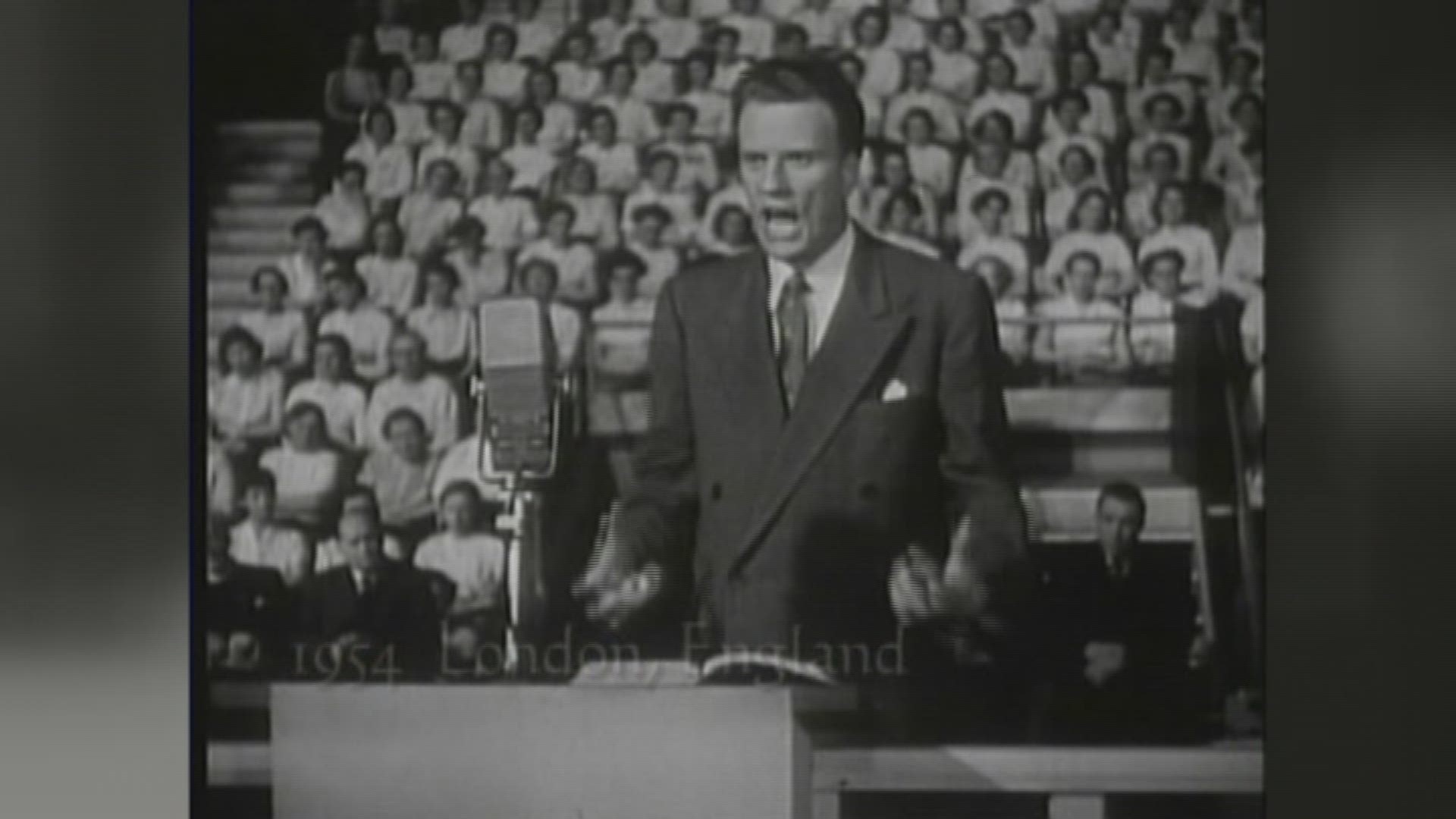 On the National Day of Prayer and Remembrance following the 9/11 attacks, Billy Graham spoke of the "mystery of iniquity and evil," of "the lesson of our need for each other" and, ultimately, of hope.

"He was so real, he made Christianity come true." observed Susan Harding, an anthropologist at the University of California-Santa Cruz. "He was homespun, historical and newsworthy all at once. He could span the times from Christ to today, from the globe to you, all in one sentence."

Grant Wacker, a Duke University professor of Christian history, says Graham represented, "what most decent churchgoing people thought and ought to think."

His reputation was untouched by sex or financial scandals. When anti-Semitic comments came to light as transcripts of conversations with Richard Nixon surfaced, Graham was promptly and deeply apologetic.

He never built a megachurch, set up a relief agency, launched a political lobby or ran for office. Yet he redefined American Protestant life by popularizing Christianity's core message — Christ died for your sins — downplaying denominational details and proclaiming the joys found in faith.

Graham was, however, drawn to power. Eventually, he met, prayed with, comforted and joked with 12 U.S. presidents, and Graham learned to walk a tightrope.

He found a fine balance that allowed him to become America's pastor, Democrat or Republican. North or South.

When President Clinton's affair with Monica Lewinsky came to light, Graham called for forgiveness. Clinton told Peter Boyer of The New Yorker, "He took sin seriously. But he took redemption seriously. And it was incredibly powerful the way he did it."

Former president George W. Bush has said it was a conversation with Graham that turned him from his drinking ways when he was young.

"I've never called him on a specific issue but his influence is bigger than a specific issue, as far as I'm concerned. He warms your soul," Bush told an ABC 20/20 special on the preacher and politics.

Graham emphasized the joy to be found in belief, in contrast to evangelists such as Jerry Falwell and Pat Robertson who routinely issued glowering condemnations of politicians or blamed natural disasters on modern culture. However, Graham did take an uncharacteristically political stand before the 2012 presidential election. He authorized full page ads in major newspapers in October urging people to vote for politicians who opposed same-sex marriage on "biblical principles."

He brought to the microphone a "corny but effective humor," Wacker says, which made him a convivial talk-show guest. Graham logged more than 50 radio or television interviews with Larry King alone. YouTube has a tape of Woody Allen interviewing the evangelist, who draws almost as many laughs as the caustic, agnostic comedian.

The Billy Graham Evangelistic Association he founded, now led by his son, Franklin, used every communications innovation possible to carry the Gospel to any willing heart on Earth. More than 214 million people in 195 cities and territories heard God's call in Graham's voice and witnessed him deliver the Gospel in person or by satellite links. His projects included founding Christianity Today magazine in 1956 and writing more than 30 books.

High among his numerous honors: The Congressional Gold Medal awarded to Billy and Ruth in 1996, the Presidential Medal of Freedom awarded to him in 1983, and the Templeton Foundation Prize for Progress in Religion in 1982. He even has a star on the Hollywood Walk of Fame.

"Fundamentalists saw him as excessively liberal, and liberals saw him as too literalist in talking about sin and salvation. His wonderful balance between them is critical to his legacy," says John Wilson, editor of Books & Culture, a sister publication of Christianity Today magazine.

Graham's last decades were slowed by illness and injury. He was diagnosed with Parkinson's disease in 1989, felled by broken bones, bouts of hydrocephalous and rounds of pneumonia.

Age, illness and bone-breaking falls had left him struggling to deliver 20-minute sermons.