Woman injured after being attacked by three dogs in Pearland

Officers were able to separate the woman from the dogs. However, police say one dog continued acting aggressively and was shot and killed by the officers. 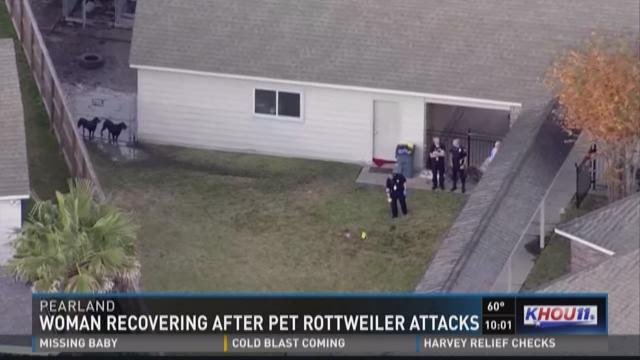 PEARLAND, Texas - Police say a woman's arm was "severely" injured after she was attacked by three dogs in Pearland.

According to the Pearland Police Department, police received a call that a 20-year-old woman was being attacked by dogs at her home in the 11200 block of Edwards Avenue.

Pearland police say there were three dogs in the yard, and one of them -- a Rottweiler -- became aggressive. Police shot and killed the dog, which was later taken by animal control and tested for rabies.

The victim was airlifted to the hospital with significant but not life-threatening injuries. Police say that Animal Service's investigation determined that the two other dogs were not involved in the attack. They were not quarantined or removed from the home.