Will the zipper merge help with Houston traffic?

The "zipper merge" works just like your zipper. Though the idea's been around for a while, making sure it's the right fit for Texas is more complicated. 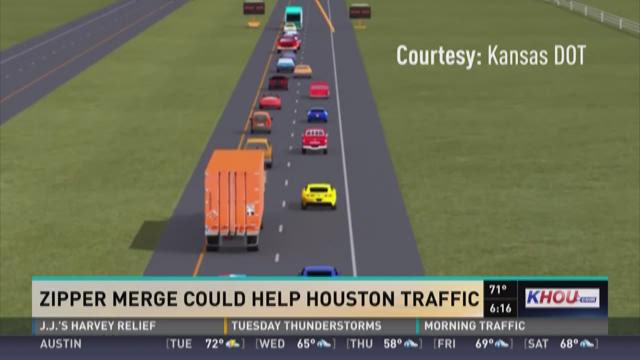 How long does it take you to get to work every day and how much road construction to you run into on the way? Here in Houston, the answers are usually "Too long" and "Too much."

There's a possible solution out there. It's called the "zipper merge" and works just like your zipper. Though the idea's been around for a while, making sure it's the right fit for Texas is more complicated.

"Not every concept works in every situation and, depending on the type of work zone and type of situation that you have, it may not be directly transferable," says Robert Brydia, a senior research scientist at the Texas A&M Transportation Institute, who is part of the team studying what he calls a "dynamic late merge."

Here's how it works: say there's a lane of highway shut down up ahead. Most of us will move over right away, creating a huge line and wait. Then there are always those people who speed to the front and cut in.

Compare that to the zipper. Everybody stays in their lane until they're forced to merge and we all take turns.

"You don't have to brake, it's more efficient and it allows the drivers to take advantage of all the capacity that's still on the roadway," says Travis Phelps, the spokesman for the Washington State Department of Transportation.

Washington is one of about a dozen states that promote the zipper merge.

"The goal at the end of the day is let's get through. We all have to get through here. How can we do it without making it worse for us? If everyone's on board with this, it makes everything move so much smoother," Phelps says.

That is the catch; everyone has to be on board. Otherwise, it's a literal no-go.

The Transportation Institute says it still needs to study the concept a bit more before it's willing to commit to the zip.