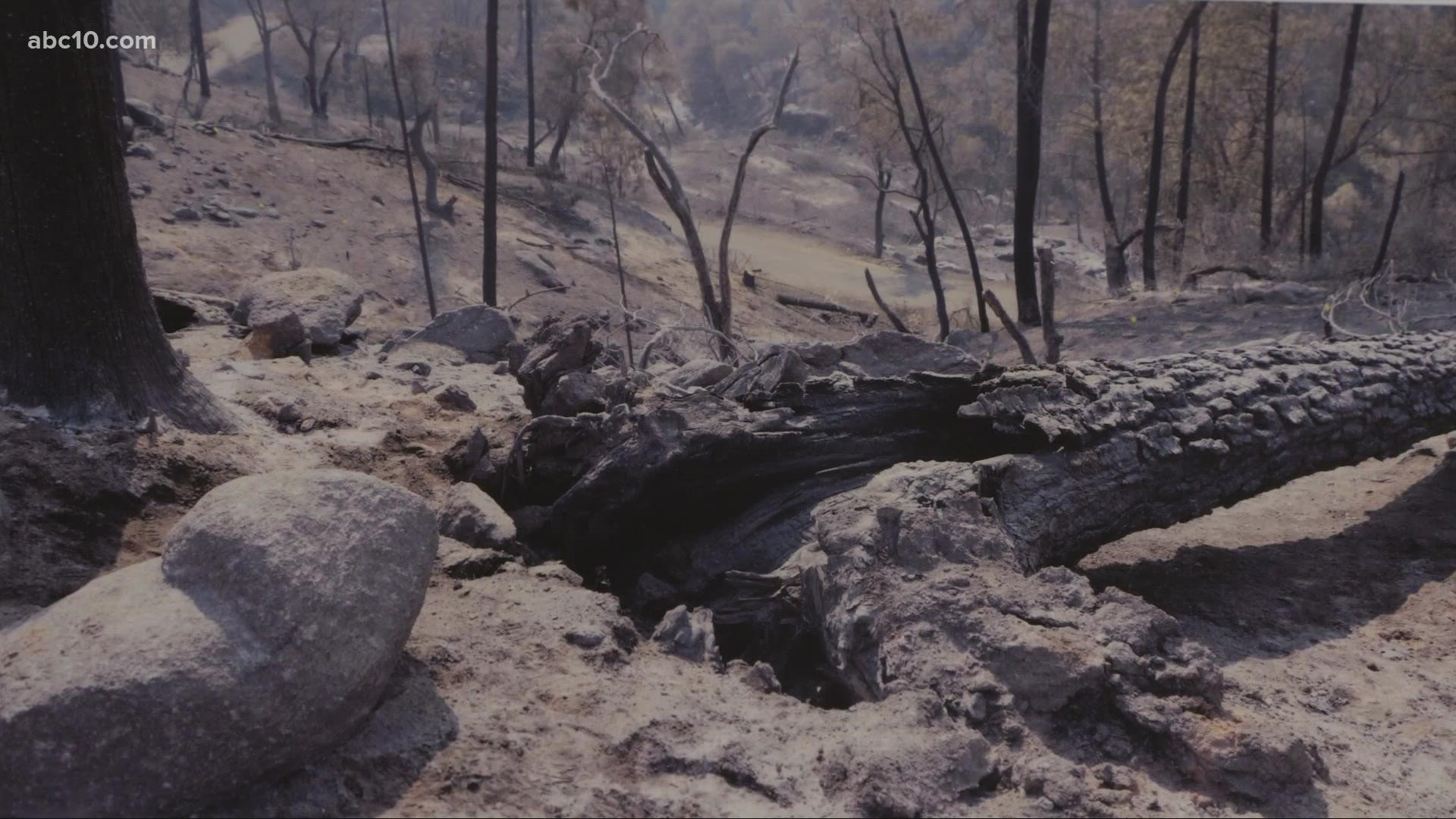 The charges also include enhancements for injury to a firefighter who was paralyzed from the chest down after being struck by a falling tree in the firefight.

The fire killed three people who tried to run for their lives, including eight-year-old Feyla McLeod and her mother Alaina Rowe McLeod. Their bodies were found burned beyond recognition in a pickup truck that ran off the road into the burning forest.

"A little 8-year-old girl. My daughter. Our daughter. My wife. Running for their lives, literally," said father and husband Zach McLeod. "Put yourself in their shoes. Think about their last moments. What they went through. Really think about it."

Credit: McLeod Family
Feyla, Alaina, and Zach McLeod are seen posing for a family photo. Feyla and Alaina were found dead in a burned-up pickup truck that ran off a road during the Zogg Fire. Zach was on his way home from work, stopping to pick up groceries at the time. He has since filed a civil suit against PG&E.

Another Igo, California resident, Karin King, was found burned to death on the roadside next to her car.

A fourth victim, Kenneth Vossen, died at the UC Davis burn center after succumbing to wounds from the fire. He had second and third-degree burns over 90 percent of his body and was found lying in a pond on his property where he’d apparently attempted to douse the flames on his body.

Similar to the pending criminal charges filed earlier this year in Sonoma County for the 2019 Kincade Fire, PG&E will face charges for illegally sparking a fire that destroyed more than a hundred home and for environmental damage.

RELATED: A wildfire in California killed a mother and daughter. Is PG&E to blame, again?

WILL ANYONE GO TO PRISON?

The question of whether a person is charged in the case is not academic. It’s the only way the alleged Zogg Fire crimes would be punishable with prison time.

If the PG&E corporate entity is convicted of the manslaughter felonies, the maximum punishment would be a fine of $10,000 for each person killed in the fire.

No individual employees or officers of PG&E were arrested for Friday’s charges; however, Shasta County District Attorney Stephanie Bridgett said the criminal investigation could still lead to arrests.

“If there is an individual or individuals that made decisions that caused this fire to happen, then they'll be held liable and they would be arrested for that,” Bridgett said in an interview with ABC10. “We're committed to continuing to build a case, if we can, against specific individuals.”

Prosecutors chose to file the slate of felonies and misdemeanors against the PG&E corporation on Friday Sept. 24, due to the 1-year deadline set by California’s statute of limitations on misdemeanors. Most felony charges come with a three-year filing deadline, allowing prosecutors at least two more years to develop charges that could lead to an arrest.

Families of the dead would like to see more meaningful accountability than that.

“A corporation can't go to jail and hear their loved ones were killed. I think it's very important for us to continue our investigation and dig as deep as we can,” Bridgett said. “They lost their lives in a very horrific and tragic fashion that was completely preventable.”

Credit: US DIstrict Court
This image, submitted by PG&E to the federal judge supervising the company's probation, shows the gray pine tree suspected of starting the 2020 Zogg Fire by falling on to a PG&E power line. California laws and regulations require power companies to trim and cut trees so they don't hit uninsulated power lines and spark fires. PG&E told the judge it believes the tree may have been marked for removal, but not removed.

Relatives of the dead say that criminal accountability for the fire is about more than punishment.

“It’s about making sure this doesn’t happen to anybody else,” Zach McLeod, the father of Feyla and husband of Alaina, said.

PG&E CEO Patti Poppe said in a statement that the company, "accepted Cal Fire’s determination, reached earlier this year, that a tree contacted our electric line and started the Zogg Fire. We accept that conclusion. But we did not commit a crime.”

Credit: US District Court
This photo, submitted by PG&E to the federal court, shows how PG&E contractors chopped up and marked parts of the pine tree suspected of sparking the deadly 2020 Zogg Fire. PG&E collected the tree as evidence after CAL FIRE released the crime scene around PG&E's power line.

Poppe's comments came in a corporate video release recorded the day before the charges were unveiled.

She did not take questions or explain why she believes the fire was not a crime, but did rebut the charges by saying "two trained arborists walked this line and independent of one another determined the tree in question should stay."

In federal court, PG&E has not described whether those arborists actually walked over to the tree and looked at its trunk on all sides. PG&E also hasn't ever explained why the tree was allowed to stand after being marked for removal in 2018.

PROBLEM THAT SPARKED FIRE ‘SHOULD HAVE BEEN OBVIOUS’

Cal Fire arson investigators and the Shasta County DA concluded PG&E should have prevented the Zogg Fire from ever happening. Their report found that a 105-foot-tall pine tree threatening a PG&E power line by leaning over it “should have been obvious.” The investigation found the tree also had a “large” injury from previous fire damage since at least 2018.

“Anyone who was up there looking at those trees would have seen it,” Bridgett said.

Photos from the arborist report show the bottom four feet of the tree had an open wound about four feet tall at its base in which most of the interior wood had rotted or burned away.

A federal judge found PG&E contractors had marked the tree as a hazard in 2018, but that the company violated state safety rules by failing to follow up and cut the tree down.

"Someone should have marked it, stayed right there, called someone, and had it cut," Zach McLeod said. "Right then and there."

Prosecutors allege a pattern of criminal safety neglect by PG&E. Some of the 31 charges include smaller fires caused elsewhere in Shasta County found to have been caused by unmaintained trees striking power lines.

The Cal Fire arborist report had images of the base of the tree that fell on @PGE4Me’s power line.

Investigators found the trunk had fire damage from 2018 or older, which hollowed out the bottom 4 feet of the 105-foot grey pine with an obvious open cavity.

CHARGES WOULD NOT BE PG&E’S FIRST HOMICIDES

PG&E pleaded guilty in June 2020 to 84 felony counts of involuntary manslaughter in Butte County for killing people in the 2018 Camp Fire, the deadliest wildfire in California history.

Outside of court, PG&E’s leaders promised that this wouldn’t happen again.

The Zogg Fire broke out three months after PG&E entered those guilty pleas in a Butte County courtroom, where prosecutors warned the company that murder charges could be filed if it caused a deadly fire again.

Shasta County prosecutors considered charging PG&E with second-degree murder in the Zogg Fire, but decided the facts they have right now are better suited to the same felony manslaughter charges that applied in the Camp Fire.

“We want to file what we know we can prove,” Bridgett said. “When we're looking at murder charges, we're looking very close to intentional conduct.”

Bridgett said the evidence so far shows culpability that is short of intent to kill, but still far more serious than a mere accident.

“They know that there's a risk. They know that risk could cause great bodily injury or even death. And they do it anyway. They disregard it,” Bridgett said. “If you've got a known hazard that sits for two years, it's just not an accident. They knew it was there. They left it, they didn't remove it and people died. They're still responsible for killing people.”

The Zogg Fire has already been probed by a federal judge who supervises PG&E because the company is already a federal felon on probation for the 2010 San Bruno gas explosion.

He discovered that, in 2018, PG&E contractors had marked a dangerous tree leaning over the power line, but the company never followed up to cut the tree down.

Utility companies have a legal duty to fix safety threats along their power lines, including removing and trimming hazard trees.

The pine tree in this case fell on a PG&E power line in a windstorm on Sept. 27, 2020, and sparked the Zogg Fire, according to arson investigators at Cal Fire.

‘THEY HAVEN’T DONE WHAT THEY NEED TO DO’

PG&E had a state-issued safety certificate at the time the Zogg Fire sparked, under a law written by lawyers for Gov. Gavin Newsom’s office after the Camp Fire.

Newsom’s office has previously claimed, “no governor in California history has done more to hold PG&E accountable and force the company to make fundamental change.”

District Attorney Bridgett says PG&E is not a changed company.

After the Zogg Fire, PG&E was allowed to keep its safety certification under the law signed by Newsom.

State officials have named PG&E as the cause of major wildfires every year from 2017-2020 and the company is the lone suspect in causing the massive Dixie Fire, which is still burning.

The Dixie Fire has reached nearly 1 million acres in size after destroying the town of Greenville, Calif., and roughly half of Lassen Volcanic National Park.

With charges pending in both Sonona and Shasta County, the PG&E corporation is already a repeat felon and probation violator. PG&E has 91 felony convictions on its record.

No one has spent a night behind bars for those crimes.

"Someone needs to be held accountable," Zack McLeod said. "No family should have to go through this. No little girl and mother should have to face what they faced."

GO DEEPER: This story is part of ABC10's FIRE - POWER - MONEY reporting project. If you have a tip that could reveal more about California's crisis with utilities and wildfires, please contact investigative reporter Brandon Rittiman at brittiman@abc10.com.