No detectable amounts of the chemicals have been found outside the ITC fence line, the company says. But here is a look at the health risks associated with the chemicals burning in Deer Park/La Porte. 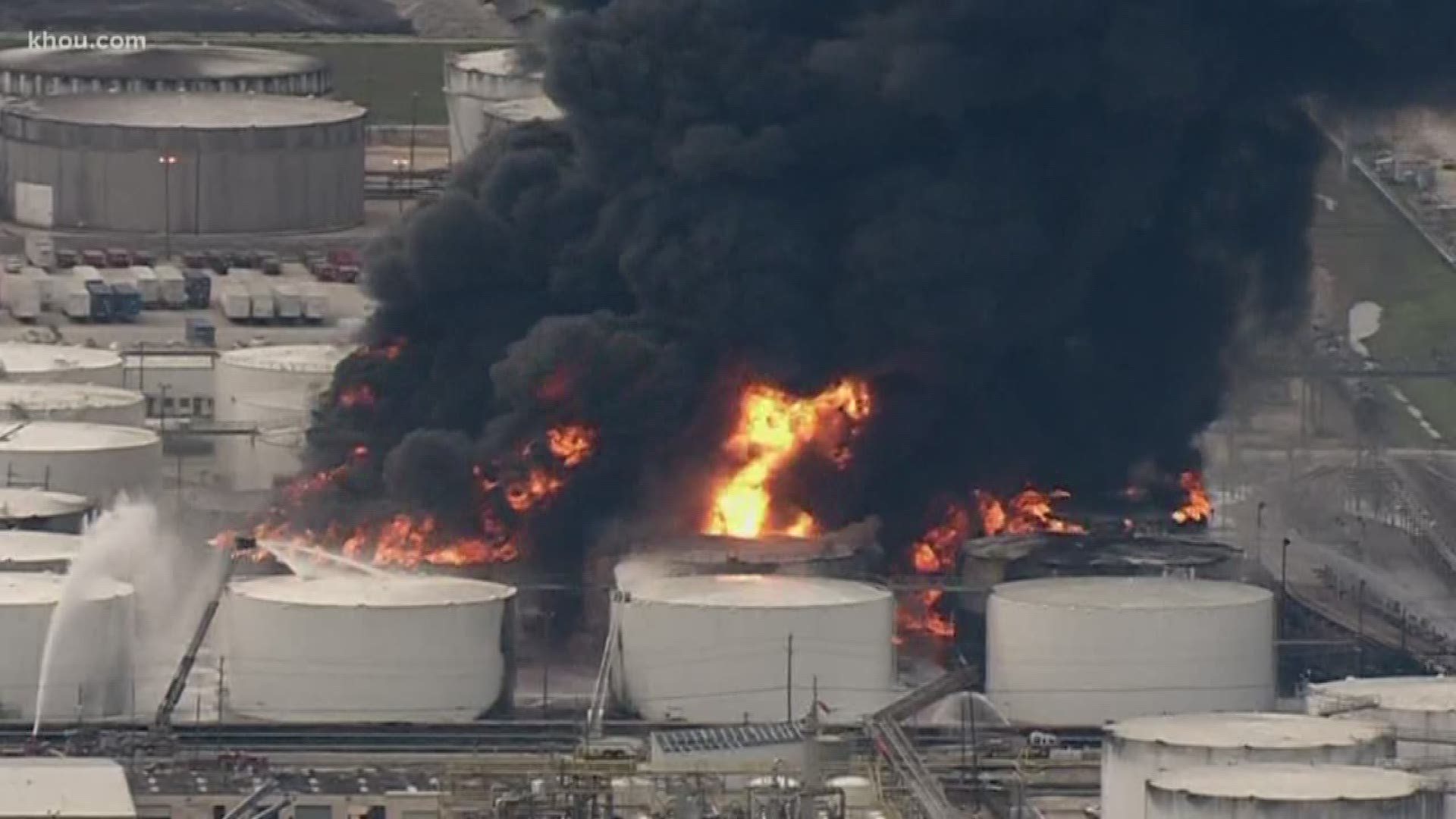 Intercontinental Terminals Company officials say it is the chemical compound naphtha that is burning in multiple tanks at their Deer Park/La Porte facility. The fire spread and is now burning xylene and toluene as well.

"Air monitoring continues and as of this update, no detectable amounts of the chemicals have been found outside the ITC fence line," stated ITC early Monday morning.

Even still, we're hearing from concerned people across the Houston area who say they can see and smell the smoke.

Here's what is burning:

Naphtha releases carbon dioxide and carbon monoxide when ignited.  And it is highly flammable.

According to the New Jersey Department of Health and Senior Services, the following are considered health risks associated with naptha:

As for xylene, it's a type of solvent used in production of gasoline and it’s flammable at room temperature. Firefighters won't use water to fight it because xylene actually floats on water. The New Jersey Department of Health says the following are health hazards associated with it:

Toluene is a widely used industrial solvent, according to the U.S. National Library of Medicine. The CDC says toluene is a clear, colorless liquid with a distinctive smell. It is a good solvent (a substance that can dissolve other substances). Toluene occurs naturally in crude oil and in the tolu tree. It is produced in the process of making gasoline and other fuels from crude oil and in making coke from coal.

Toluene can enter your body from the air, water, or soil. You are exposed to toluene by breathing outdoor or indoor air containing this substance. Gasoline contains toluene and so do some other products used in occupational or home settings (e.g., solvents, paint thinners). Inhalation and dermal exposure is possible when using these products.

A serious health concern is that toluene may have an effect on your nervous system (brain and nerves). Nervous system effects can be temporary, such as headaches, dizziness, or unconsciousness. However, effects such as incoordination, cognitive impairment, and vision and hearing loss may become permanent with repeated exposure, especially at concentrations associated with intentional solvent abuse. High levels of toluene exposure during pregnancy, such as those associated with solvent abuse, may lead to retardation of mental abilities and growth in children. Other health effects of potential concern may include immune, kidney, liver, and reproductive effects.

Single exposures to toluene or repeated exposures over a few weeks can cause headaches and sleepiness, and can impair your ability to think clearly. Whether or not toluene does this to you depends on the amount you take in, how long you are exposed, and your genetic susceptibility and age. One very dangerous activity is to expose yourself to a large amount of toluene in a short time by deliberately inhaling/sniffing paint or glue. At first, you will feel light-headed. If exposure continues, you can become dizzy, sleepy, or unconscious, and you might even die. Toluene causes death by interfering with the way you breathe and the way your heart beats. When exposure is stopped, the sleepiness and dizziness will go away and you will feel normal again.

Low to moderate, day-after-day exposure to toluene in your workplace can cause tiredness, confusion, weakness, drunken-type actions, memory loss, nausea, and loss of appetite. These symptoms usually disappear when exposure is stopped.

After overnight air quality tests, a shelter-in-place for the Deer Park area has been lifted, but La Porte ISD and Deer Park ISD have canceled classes for the day. San Jacinto College says classes and offices will be open as normal for the day.

In Houston, some residents said they could smell the smoke in the early-morning hours. KHOU 11 Meteorologist Chita Craft says the winds are very calm, and clouds are trapping the smoke closer to the ground.