A rebuilt home in Braes Heights features a number of features meant to mitigate flooding. Those include a driveway like we've never seen before. It actually helps control run-off by storing water. 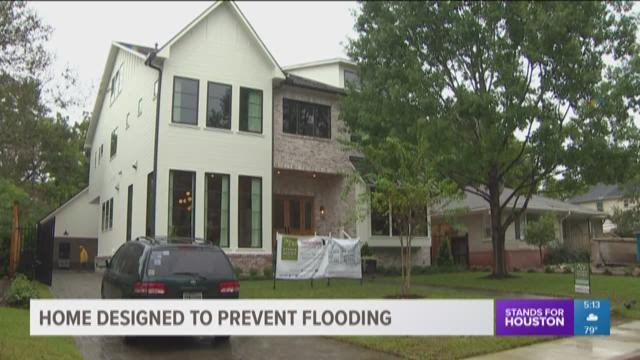 HOUSTON - A driveway that can hold nearly 4,000 gallons of water is among the flood-tolerant features of a new home in a Houston neighborhood hit hard by Harvey.

It’s the first time the company, run by Lavine and his sister Sarah Lavine-Kass, has used the permeable driving system. Basically, water flows into cracks in between pavers rather than into the street.

“We’ll excavate 14 inches of earth and then, in its place, we’ll put in rock starting with three-inch rock,” Lavine said. “Then we put in what are called 'fines,' or really fine pebbles. Pavers go on top of the 'fines.'"

Water slowly seeps into the soil over time. This one driveway can temporarily hold about 3,700 gallons of water. The builders believe that would be billions of gallons of storm water storage if every single-family home in Houston had this system.

Here are some other flood-tolerant features of the home:

Stone Acorn Builders plans to ask just under $2 million for the new home in Braes Heights, which they’ve branded as a “beyond the storm showcase home.”

Click here for more information on the home and a series of upcoming open houses that will benefit the Barbara Bush Houston Literacy Foundation.