The unanimous decision was made during a special called board meeting Thursday night. 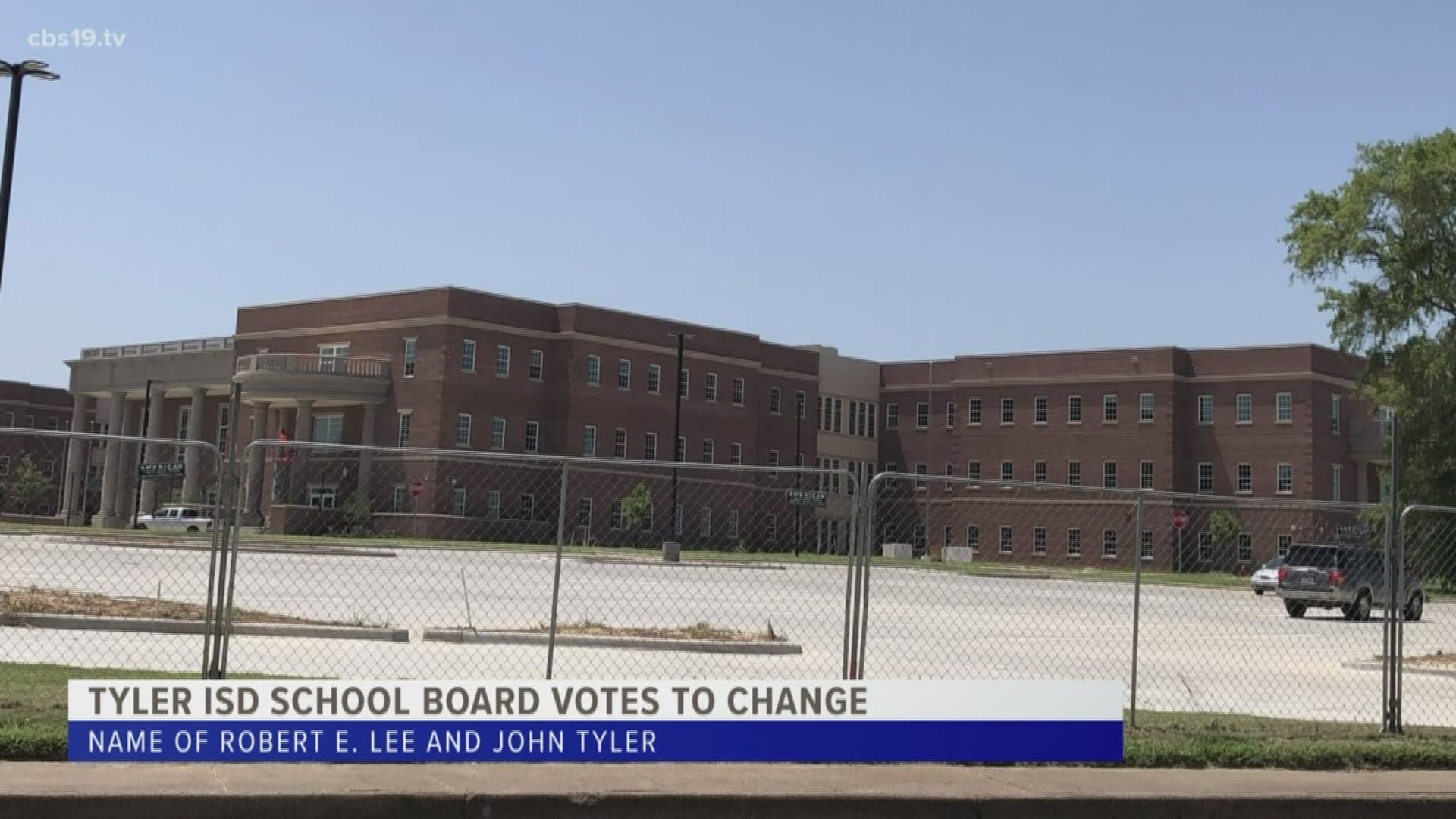 TYLER, Texas — During a special called board meeting on Thursday, the Tyler Independent School District's Board of Trustees made history and voted to change the names of the district's high schools.

Following the board's executive session and after more than 40 people participated in the public comment portion of the meeting, the board voted unanimously to rename Robert E. Lee High School and John Tyler High School due to the names having ties to slavery and the Confederacy. A majority of the speakers were in favor of changing the names.

The move was also backed by Heisman Trophy winner and NFL Hall of Famer Earl Campbell who graduated from John Tyler in 1974. Members of the first class of the "Rebel Guard" at Robert E. Lee also supported the change.

“This has been a trying time to be a board member to say the least,” Board President Wade Washmon said. “But I do believe the board has made a decision that will remove a growing obstacle to our focus on successful student outcomes and has removed an issue that will only serve to be divisive for the community and future boards. We look forward to turning our focus back to successful student outcomes.”

“As always, I appreciate the board’s work,” Superintendent Dr. Marty Crawford said. “Public service is sometimes a thankless commitment that is under-appreciated for the time given in place of personal business and family time. Concerning this issue, the board was acutely sensitive to comments and commentary and realizes the significance of their decision.”

After the vote in favor of adjusting the high school names passed, the board held a First Reading to revise policy CW (LOCAL) for naming district facilities.

In renaming the schools, the following guidelines will be used:

The board says a person whose name is considered for a portion of a school facility must have made a significant local contribution to society and/or education, and the name should lend prestige and status to an institution of learning.

Regarding nominations for the names, the board will accept local community, student, and staff input or suggestions to collect viable names for considerations. Input and suggestions shall be made in writing on a form provided by the district within the designated time frames established by the district, and will only be accepted for the school facility or portion of a school facility for which names are being solicited by the board.

The superintendent (or designee) may appoint a selection committee to review all input and suggestions, and to ensure that any names presented for board consideration meet the established criteria. The superintendent shall submit to the board in a timely manner no more than three recommended names for each school or facility to be named. A list of all submitted input or suggestions will be provided to the board. The responsibility for the final decision in naming a new school or facility rests with the board.

“As we build upon the continuous improvement we have accomplished over the past six years, our daily mission to provide the very best academic opportunities and school experiences continues, and that will not waver.” Dr. Crawford said.

"I applaud the preparation and the diligence of the Tyler Independent School District (TISD) Board President Wade Washmon and the other TISD board members. Their vote tonight inspires a positive future for our community. It also allows the TISD educators, students, and parents to move forward with the huge task of reopening our newly built schools and furthering our student's success.

For those of us that grew up in Tyler, we know that this has not been a quick decision. The names of the two high schools have been a topic of community discussion for at least 50 years. But remember these are just two high school names that reflect the past of two non-Tylerites. In my opinion, we are at a turning point. We listen with a fresh perspective as we move towards an inclusive future. Tonight, this community has come together through our elected school board to make this unanimous decision, which will provide the opportunity for public involvement in selecting the new high school names.

As we know, the consensus for thoughtful change is always a long road and never quick. The strength of our community is that we take the time to build this consensus. For those that advocated for this change, please remember that there are many people that are alumni of these two institutions that will need time to heal. Be proud of your role, but humble in your expression. Be mindful this will continue to be an emotional topic for many. Be sensitive to those holding a different view. I understand why some will be disappointed with this decision. To those that are, I urge you to remember why these facilities exist. They are built to be places that educate and inspire our young people so that they grow up with the knowledge and wisdom to contribute responsibly to our world. Simply put, they exist for Tyler's tomorrow. Please listen to the younger generations who have told us that the names of these buildings should be ones they can be proud to own. While their vision for the future will change the name of the schools, it does not take away the positive memories we have as alumni.

With that in mind, I’m looking forward to my 40th REL reunion next year."

Earlier this year, REL cross country star Trude Lamb announced she would not compete for the school if she had to wear the school's name on her jersey. Her stance made headlines across the country.

The name change debate was also brought to light in 2018 in the aftermath of the Charlottesville protests. But the root of the issue stretches back more than 50 years.

According to Dr. Crawford, they have come up with a preliminary estimated cost. However, Dr. Crawford said they do not have an exact number from a vendor to determine the cost of the change and hope to act in a fiscal manner.

Director of Visual and Performing Arts Sandra Newton spoke on the associated costs of the name changes with visual and performing arts.

Newton says TISD is on the normal uniform replacement schedule for the band uniforms for John Tyler and, regardless, they will be replaced in 2020, while Robert E. Lee uniforms are scheduled to be replaced in 2021. This means both uniform changes are already in the budget. Newton also said the REL and JT names on instruments cases, sheet music, and other band items can be easily replaced or removed. She also said with the construction of the new schools, they have already purchased new chairs that do not currently have signage. In conclusion, Newton said the cost for performing arts would be minimal.

Athletic Director Greg Priest spoke on how the name change would affect cost or the athletic department.

Priest says varsity jerseys usually last three to four years and are then passed down to sub-varsity teams, which means most jerseys last approximately nine years. According to Priset, the district would also need to consider costs of replacing sweats, practice uniforms/gear, jackets and coaching gear, but could "make it work." He presented a "conservative estimate" of $98,000 regarding the cost for athletics.

The board then called Director of Facility Services Tim Loper to speak on the associated costs of the name changes regarding district facilities.

The board estimated approximately $330,000 (give or take) as the cost for major changes to the high schools.

The next regularly scheduled board meeting will be held Monday, July 20, at 7 p.m.

For continuing team coverage on the TISD board's decision, visit our news partners at the Tyler Morning Telegraph.

Why Robert E. Lee graduates are pushing for change in school’s name