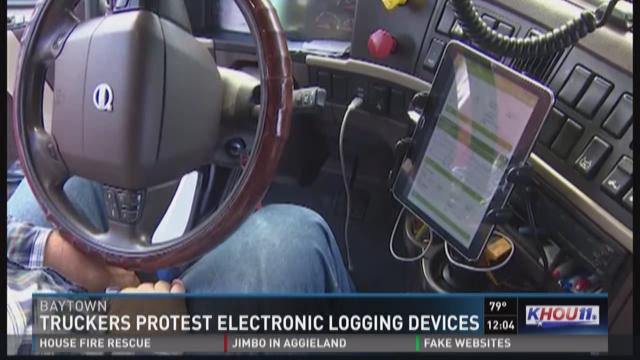 Uncle Sam says it’s about safety, but drivers against it say it’s taking away their privacy, and making it more difficult to do their jobs.

Some protestors gathered in Baytown, just off the East Freeway, to voice their concerns.

Hitting the open road is both a passion and livelihood for these truckers.

“Wake up every day in a new state, it’s a beautiful job, but the mandates are not helping us,” said David McKinney, a third-generation truck driver.

That mandate, they claim could take away their freedom to get their jobs done, is coming down from the federal government, requiring them to install what’s known as ELD’s, or electronic logging devices.

A black box, that’ll log their miles, hours, personal information, including where they are at all times.

Information some truckers say, they don’t want to share.

“That truck is my home, my business, my money-maker, first of all it’s my home, I have a right not to have a tracking device on my home,” said Kim Schwindt, whose being driving big rigs for the last six years.

Saying the device is no different than an ankle bracelet.

“If you haven’t done anything wrong, you’ve abided by FMCSA rules, you’re a safe operator, you come out here and drive these trucks every day, you perform your jobs safely why must you be monitored by the federal government, like a criminal?” said McKinney.

According to the Federal Motor Carrier Safety Administration, the new mandate is meant to make it easier and faster to track, manage, and gather data on the number of miles logged by drivers.

It’s also meant to keep both truck drivers and other people on the roads safe.

“They say it’s about safety, but it’s not about safety, because you’re racing against the clock,” said Ray French Jr, whose been driving trucks for over four decades.

Time they’ll have to watch, because truck drivers will now only be allowed to drive 11 hours a day, and be given a 14-hour window.

But truckers say these devices don’t take into consideration a multitude of factors like traffic, road conditions, and most importantly, the mental and physical state drivers are in.

Truckers say these devices are also costly for them, because they’ll have to pay a monthly monitoring fee as well, on top of purchasing the device itself which could be upwards of $400 or more.

Local politicians who are against the mandate, are doing their part to voice their opinions as well.

Republican Congressman Brian Babin attended the protest in Baytown Monday, talking with truckers about their frustrations.