The 'Lazy S.O.B.s?' The story behind the most unique cap in baseball

It's the most unique cap in all of baseball. But why does one minor league team want to be associated with the term 'Lazy S.O.B.?' KHOU 11 Sports Anchor Jason Bristol explains. 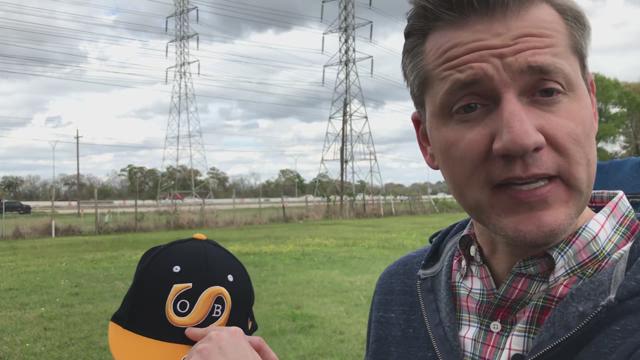 In baseball, not all uniforms are uniform. One team’s starting nine wears a hat that’s definitely one of a kind.

The most unique cap in baseball features an ‘S’ and ‘O’ and a ‘B.’ The ‘S’ is on its side because its lazy.

The headgear is the handiwork of Bill Moore, who once scouted for the Astros in the mid-nineties and now runs a minor league team from Arizona called Garden of Gears, named after a car dealership Bill once owned.

“I think it’s one of the more unique caps anywhere,” said the manager of the team, Bill Moore. “There’s not many high school (teams) that are lazy sons of b------.”

Moore is from a family of cattlemen in Arizona. When he was about ten years-old, he designed the logo in the dirt for a livestock brand. He was inspired by his grandfather’s favorite saying. “It could be good; it could be bad,” Moore recalls. “It didn’t matter. It was always, ‘That lazy son of a…’”

Moore, who soon turns 73, has been using it ever since. “He registered the brand, ‘Lazy SOB,’’ he added. “On the (state) form it says, ‘What animals do you intend to use this brand on?’

Yes, Bill Moore’s a character (by the way, his car dealership was a 'Division of Lazy S.O.B. Inc.). His players realize it right off the bat.

Moore, who has also served as an associate scout for the Expos, Cubs and Rays, is in Houston for the Pecos Spring League, a tryout for wannabe pros who hope to make an independent league club.

The league sells the caps for $25 on its website.

While they don’t hit every fastball, they do not miss the meaning behind these one-of-a-kind hats.

“The logo means don’t be a lazy S.O.B.,” said catcher Jacob ‘Gonzo’ Gonzalez. “Meaning, hustle every play you can. Make every throw you can.

“Give everything you got.”

“There’s nothing quite like it,” said coach T.J. Zarewicz.

“It represents what baseball is,” said first baseman Ali Deolarte, from Las Vegas. “If you’re lazy in this game, you’re not going to go far.”

Here’s another thing about the most unique cap in baseball. One size, fits all, as Bill Moore would agree.