lf you get caught with small amounts of pot in Texas now, you can serve jail time and have a criminal record. 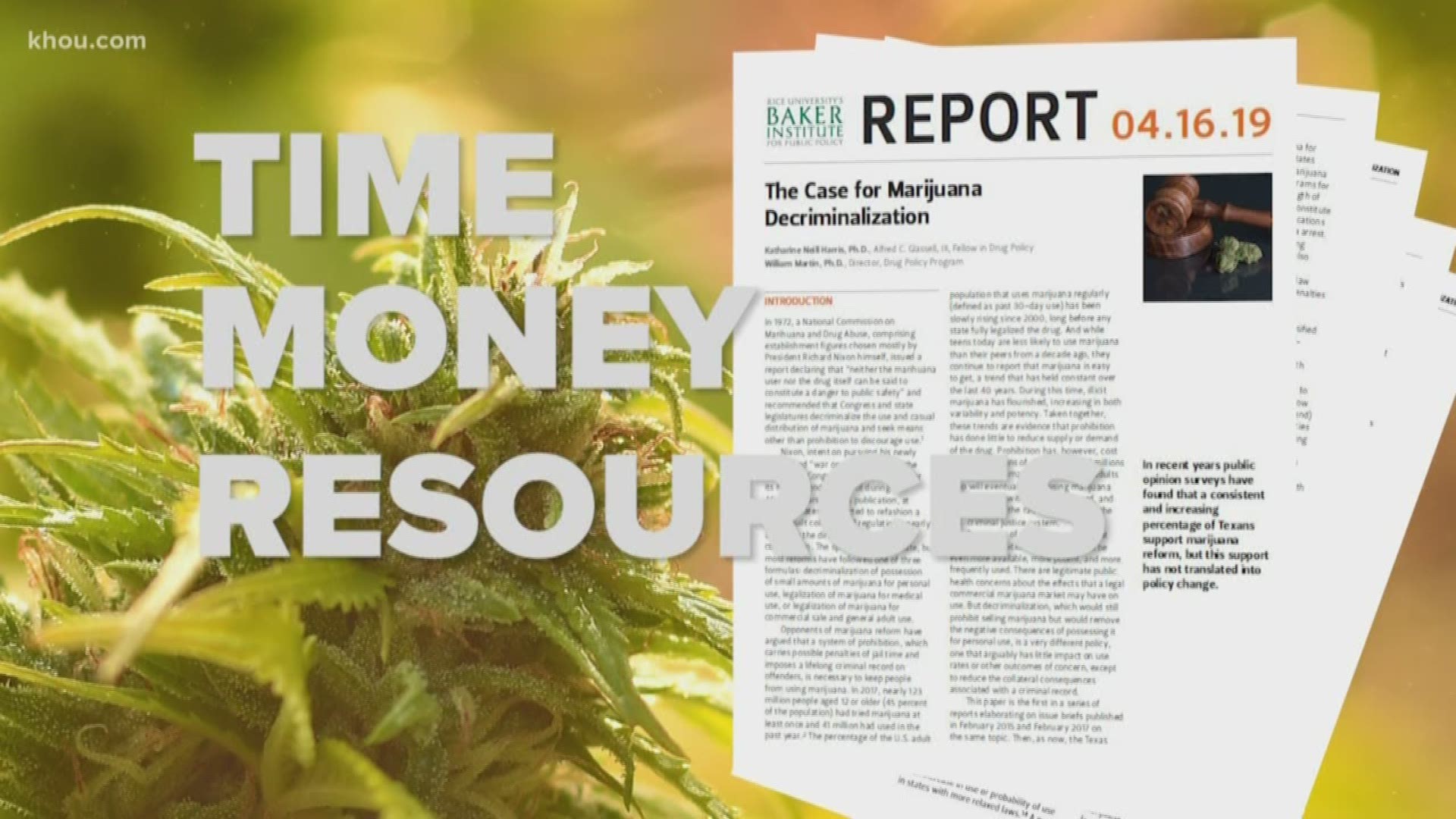 HOUSTON — Experts at the Baker Institute in Houston are throwing their support behind a proposed bill that would make possession of small amounts of marijuana a civil violation, instead of criminal.

That means the penalty for possession of an ounce of pot or less would be like getting a traffic ticket and paying a maximum fine of $250. There would be no jail time or criminal record.

Tuesday, the Baker Institute published their findings as they made the argument for why decriminalizing marijuana would save Texans time, money and resources.

As states continue to legalize marijuana for medical and adult sale and use, identifying the implications of these more substantial policy changes has become a more pressing issue, the authors said.

“That holds a ton of weight with Houston representatives. They know what that organization means,” said Hunter White, communications director for Republicans Against Marijuana Prohibition (RAMP).

White believes reports like these have motivated legislators to draft an unprecedented number of bills supporting marijuana production, use or decriminalization.

Out of the more than 50 bills, White says at least a dozen have a chance of doing anything.

HB 335 takes the penalty for low-level possession from a Class B felony, to a Class C misdemeanor. You go from the potential for jail time, to no jail time.

It also happens to be the only bill pushing decriminalization that conservative Governor Greg Abbott has said he’s open to.

Since 1989, possession of less than 2 ounces of marijuana has been a Class B misdemeanor in Texas, with possible penalties of 180 days in state jail, a $2,000 fine and a criminal record.

On the medical marijuana front, HB 1365 paves the way for the possession, use, cultivation, processing, distribution, transportation and delivery of medical cannabis for medical use by patient with certain debilitating medical conditions.

White believes these two bills are the closest in terms of getting the bi-partisan support necessary to move forward in the legislature.

Marijuana prohibition advocacy groups like Smart Approaches to Marijuana (SAM) offered this rebuttal in a statement:

"Though we do not want people to be criminalized for using a small amount of marijuana, and we acknowledge people whose only crime is smoking a joint aren't languishing in Texas prisons, we are very concerned about recent moves in Texas and beyond to normalize and commercialize today's highly potent marijuana. Today's marijuana is much more harmful than it used to be - it is now 99% potent in some cases - and it is being sold in some states as candies, gummy bears, ice creams, and other products to entice children.

"And the marijuana industry is similar to Big Tobacco of yesteryear -- a well-financed, organized lobby intent on profiting off of addiction. We oppose any moves to legalize, normalize, commercialize, and further marijuana -- which science now shows can cause mental illness, car crashes, workplace accidents, and learning problems."

Smoking pot vs. tobacco: What science says about lighting up

Texas law enforcement members speak against marijuana at the Capitol