The pandemic, police and potential for protesters; an opening day at the Texas legislature unlike any before

Everyone entering the state capitol on Tuesday had to get a negative COVID-19 test, which was administered in a tent outside the building. 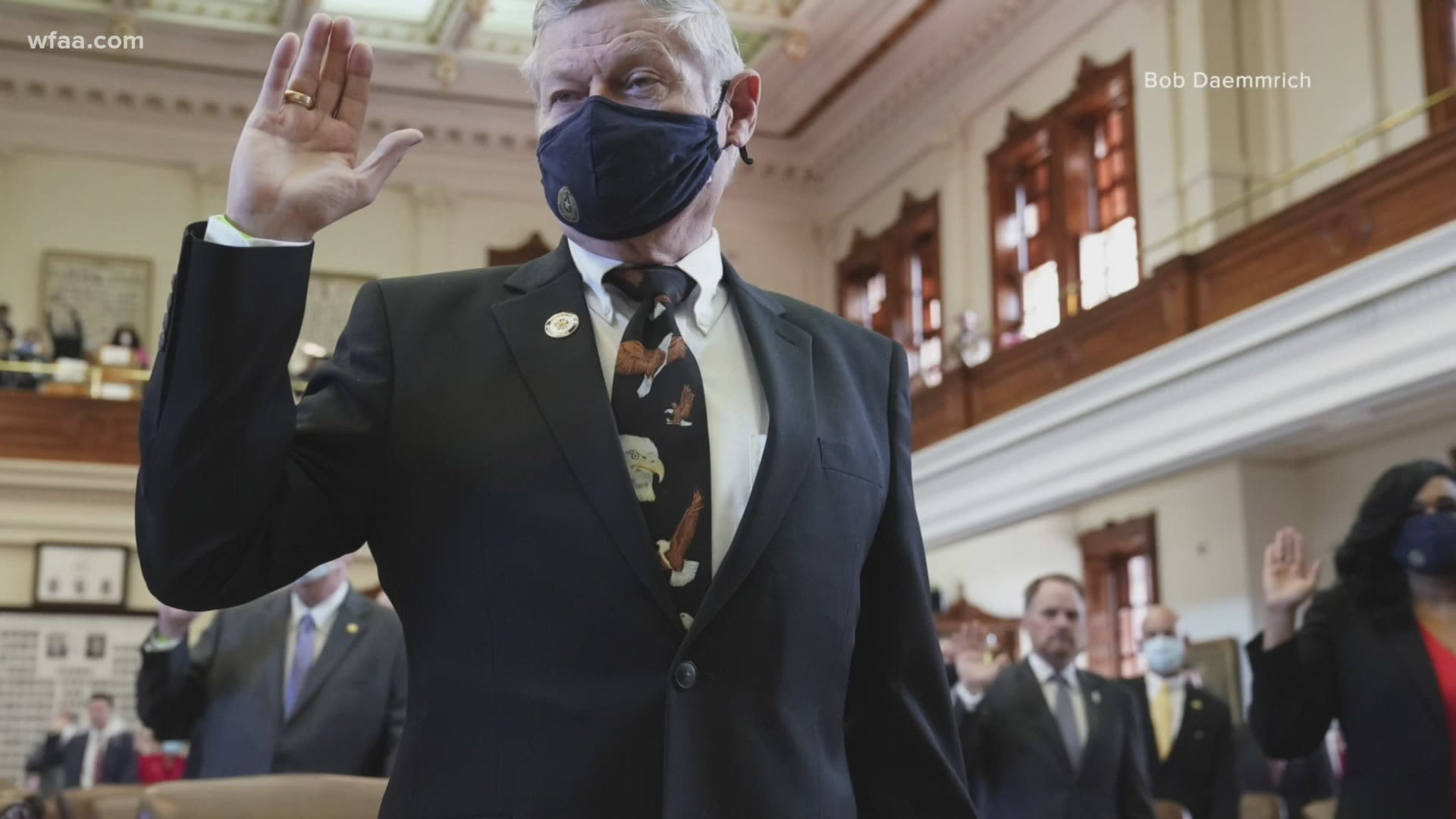 AUSTIN, Texas — Precisely at noon on this day, as the state constitution requires, the Texas legislature gaveled back into session.

Anyone entering the Texas Capitol had to have a negative COVID-19 test, which was administered in a tent outside the building.

State lawmakers, wearing masks, took their oath of office in front of far fewer visitors this year. The galleries, on the second level of the House and Senate, had many empty seats even after social distancing was accounted for.

“My mom, she told me there are often times when it’s best to stick with what you know instead of what you heard. And what I know about Dade Phelan, is that he’s the right person for our state,” said state Rep. Nicole Collier, R-Fort Worth.

Dade Phelan, a Republican from Beaumont, was the biggest news coming out of the House of Representatives.

Members elected him as the new speaker replacing Rep. Dennis Bonnen, R-Angleton, who decided not to run again.

“We must all do our part – not as Republicans and not as Democrats – but as Texans and Americans,” Phelan, 45, said in his acceptance speech.

Outside the capitol, more than 100 Texas state troopers staged a show of force after the FBI warned that armed protesters might descend on state capitols across the country.

Inside, lawmakers made calls for unity.

“We work together. We have our good and healthy debate, but we work as 31 members representing 29 million people, the ninth largest economy in the world,” said Lt. Gov. Dan Patrick, R-Houston, addressing the state senate.

But unity is commonplace on opening day. The question is whether lawmakers can sustain it.

“That unity is like any relationship. There’s going to be some trying times. It’s all the more important that you have a solid relationship before it gets tough,” explained state Sen. Nathan Johnson, D-Dallas.

Still, the senator said, he is encouraged that his legislation to expand Medicaid might finally be welcomed by his Republican colleagues.

An expansion, like other Republican states have already done, would provide health insurance to about a million more Texans and be paid for mostly by the federal government.

“Interest in some form of expansion seems high. The vehicle ultimately may not be traditional Medicaid expansion, but instead some vehicle over which we have more discretion in how we draw down and spend federal Medicaid funds. That’s what I’ve presented in my Senate Bill 117,” Johnson added.

Democrats Michelle Beckley from Carrollton and Ana Maria Ramos from Richardson took their oath of office outside the Mexic-Arte museum, about six blocks south of the capitol.

Credit: Christina Wagoner
From left state Reps. Michelle Beckley and Ana Maria Ramos take the oath of office in Austin. They skipped the opening ceremonies fearing it could have become a super spreader event.

Ramos’ husband, a notary public, swore them in.

Over the next few weeks, lawmakers will settle into the business portion of their jobs, getting committees established and beginning to work on legislation.

The Texas legislature is in session for 140 days every other year.