Three lawmakers tested positive on Saturday and two more on Sunday. All of the lawmakers are fully vaccinated. 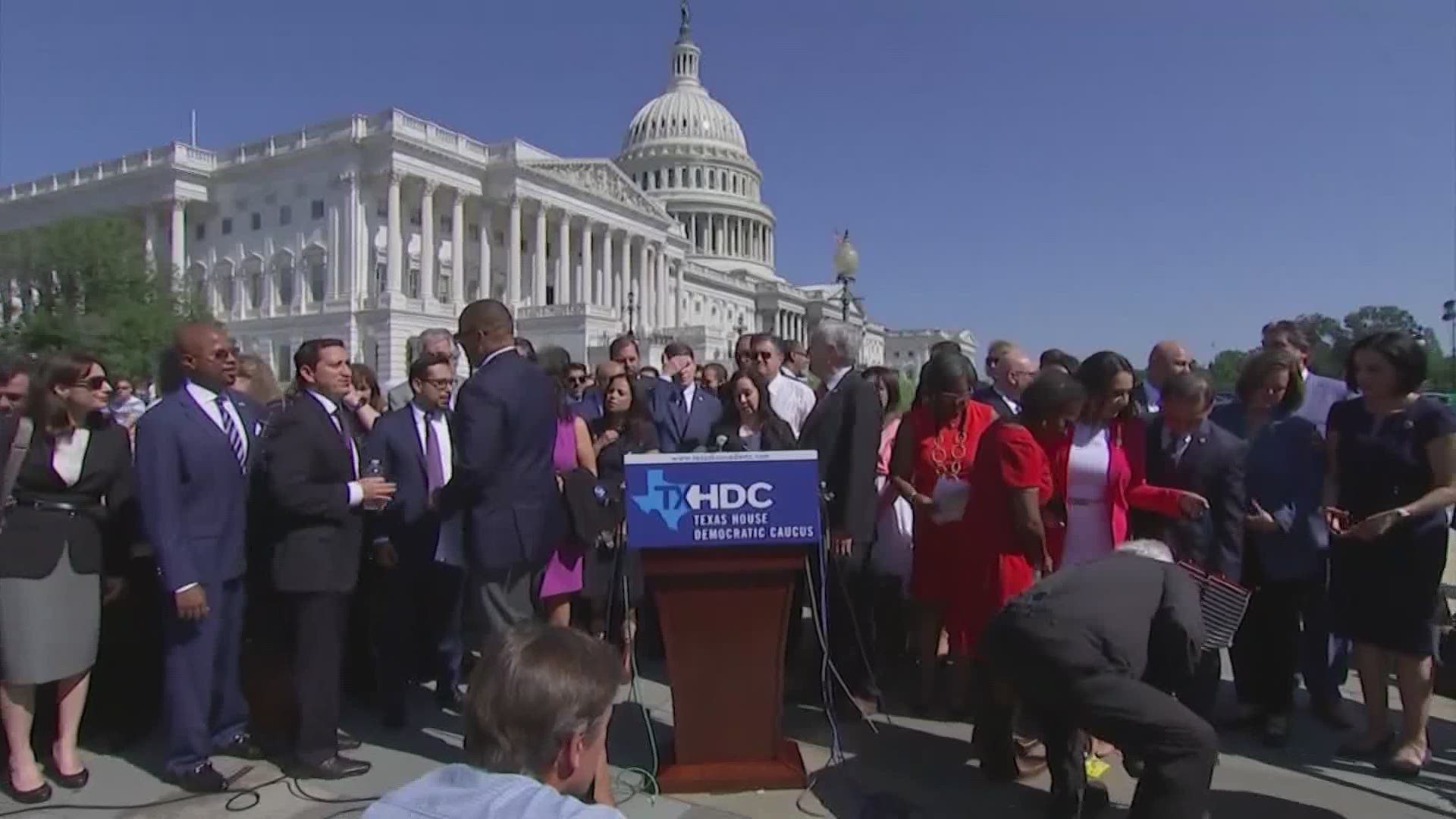 The five lawmakers are among House Democrats who fled to Washington, D.C. to stave off GOP priority voting bills during the special legislative session. The members who tested positive all have been fully vaccinated, which helps protect against severe illness. All of the lawmakers are showing no symptoms or only mild symptoms.

"Today, I received a positive COVID-19 rapid antigen test result. I am fully vaccinated, and had tested negative on Friday and Saturday. I am quarantining until I test negative, and I am grateful to be only experiencing extremely mild symptoms," he said in a statement, which urged the public to get vaccinated and said he will continue to participate in the quorum break.

Martinez Fischer spoke to KHOU 11 from his hotel room in D.C. He said he feels good despite his positive result.

“There’s an instant reaction of 'OK, how did that happen? I don’t feel anything.' And then there’s this other reality of just how serious these variants are," Martinez Fischer said. "Even though I'm fully vaccinated, I still tested positive, and, luckily, as of now, I have some very, very minor symptoms."

Martinez Fischer said he plans to keep working from his room.

Starting Monday, Texas Democrats will join a roundtable discussion with elected officials and activists from all across the country to share ideas, best practices and legislative items that, they say, can be used to create free, fair and secure elections.

“This week, we’ll be in classroom settings, for the most part, so COVID has taught us how to do these things virtually," Martinez Fischer said.

Earlier Sunday, Austin Rep. Celia Israel said in a statement she was among the initial three to test positive.

The House Democratic Caucus said it would not identify lawmakers who test positive out of respect for their privacy. But the caucus has started additional precautionary measures, like providing daily rapid tests for all lawmakers and their staff in Washington, D.C.

On Friday night, one member tested positive for the coronavirus and immediately alerted colleagues, who, in addition to staff members, took rapid tests. On Saturday morning, two additional members tested positive after taking rapid tests. The cases were first reported by the Austin American-Statesman.

RELATED: Inside Texas Politics: What is the endgame for Texas Democrats, as legislative business continues?

In a statement, Rep. Chris Turner of Grand Prairie, the caucus chair, said the caucus is adhering to guidance from the Centers for Disease Control and Prevention and following protocols. According to the CDC, fully vaccinated people do not need to quarantine if they have been in close contact with someone who has tested positive and they are showing no symptoms. Also, if traveling in the United States, fully vaccinated people do not need to get tested or self-quarantine before or after travel.

“This is a sober reminder that COVID is still with us, and though vaccinations offer tremendous protection, we still must take necessary precautions,” Turner said. “We are in touch with public health experts in Texas to provide additional guidance. Our caucus will follow all recommendations from public health experts as we continue our work.”

A small percentage of vaccine breakthrough cases, in which a fully vaccinated person tests positive for the coronavirus, have been expected, according to the CDC, but they are rare and do not discount the effectiveness of COVID-19 vaccines.

The number of average coronavirus cases reported in Texas each day in the last week has increased by almost 1,000 cases compared with the average a week ago, according to data from the Texas Department of State Health Services. Hospitalizations have also increased, and as of July 14, more than 2,500 Texans were hospitalized. On Saturday, the state hit a positivity rate of more than 10%. The positivity rate measures how prevalent the virus is in Texas based on positive test results.

The highly contagious Delta variant of the coronavirus has raised the alarm of some health experts. At least three cases from a recent outbreak at a Houston-area church camp have been confirmed to be the Delta variant.

In recent days, Republican lawmakers, who have criticized House Democrats’ move to break quorum, have urged their colleagues to return to the Capitol before the current special session ends Aug. 6. More than 51 Democrats left the state last week, leaving the House without the minimum number of lawmakers required to conduct business. However, a handful of Democrats have remained adamant that they don’t plan on returning to the state any time soon.

In a statement on Saturday, House Speaker Dade Phelan wrote on Twitter that he extended his “prayers for safety and health” to Democratic caucus members.

Phelan, a Beaumont Republican, said on Thursday he would charter a plane this weekend to Austin to retrieve Texas Democrats from the nation’s capital. A move to issue a “call of the house,” which permits lawmakers to track down lawmakers who have fled the House chamber, passed in the House on Wednesday. However, Texas law enforcement does not have jurisdiction in Washington, D.C., so it’s not clear if the procedural move has any power until lawmakers return to the state.