One dead after engine blows apart on Dallas-bound Southwest flight

Shrapnel from the engine flew into the plane and broke a window. Marty Martinez, a passenger on the plane, posted a Facebook Live during the emergency landing. "Something is wrong with our plane! It appears we are going down!" 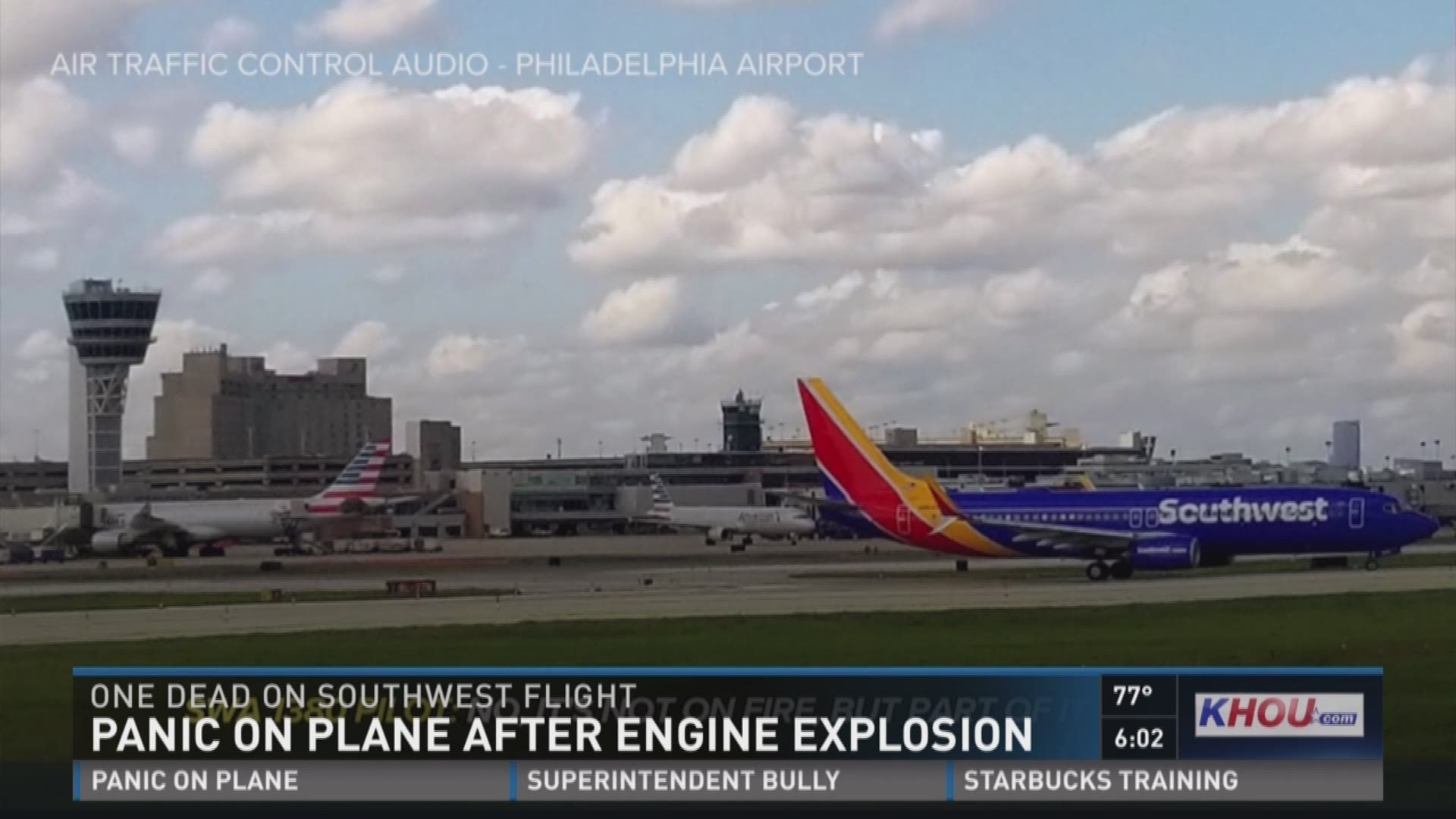 PHILADELPHIA — PHILADELPHIA (CBS) — One person was killed Tuesday when a Southwest Airlines flight to Dallas made an emergency landing at Philadelphia International Airport after an engine blew out as the plane left LaGuardia Airport in New York.

One person was killed Tuesday when a Southwest Airlines flight to Dallas made an emergency landing at Philadelphia International Airport after an engine blew out. (WFAA)

Shrapnel from the engine flew into the plane and broke a window.

What a flight! Made it!! Still here!! #southwest #flight1380 pic.twitter.com/Cx2mqoXVzY

The woman who died was partially sucked out of the window, according to witnesses.

She has been identified as Jennifer Riordan, a mother of two.

News of Riordan's death was first shared by the assistant principal of the Albuquerque Catholic school attended by her two children.

In an email to parents, assistant principal Amy McCarty wrote that "the family needs all the prayers we can offer."

Riordan was a vice president of community relations for Wells Fargo bank. She was the wife of Michael Riordan, who served until recently as the chief operating officer for the city of Albuquerque.

The New Mexico Broadcasters Association on social media said Riordan was a graduate of the University of New Mexico and former board member.

Seven others were treated for minor injuries.

Marty Martinez, a passenger on the plane, posted a Facebook Live during the emergency landing.

WATCH: A passenger on the Southwest flight that made an emergency landing in Philadelphia posted a Facebook live video from the plane as he put on his oxygen mask https://t.co/lVelLDaE97 pic.twitter.com/NqXe7TAbbC

“Something is wrong with our plane! It appears we are going down! Emergency landing!! Southwest flight from NYC to Dallas!!” he wrote.

Martinez told CBSN that he thought he was recording his "last moments" and said there was "blood everywhere" on the plane.

“Flight attendants ran over calling for passengers to help cover the hole as they broke down and began uncontrollably crying and looking horrified as they looked outside. Plane dropped dramatically and it smelled like fire with ash coming down on everyone thru the vents. Absolutely terrifying, but we are okay,” Martinez wrote..

A Philadelphia station spoke with Martinez by phone.

"We were probably going down for 10 or 15 minutes. And of course, everyone is freaking out, everyone is crying. It was the scariest experience," passenger Marty Martinez says on emergency landing on Southwest flight https://t.co/m3lth9FFRU pic.twitter.com/C3GF62Cg8Y

— CBS News (@CBSNews) April 17, 2018The plane was flying from LaGuardia Airport in New York to Dallas.

Timothy Bourman, 37, told philly.com he was in the back of the plane when he heard a boom.

“All the sudden, it felt like we dropped 100 feet,” said Bourman, a pastor in New York. “A lot of people started panicking and yelling, just real scared."

Bourman said the pilot appeared to struggle for control of the plane. Passengers were told to brace for impact, but the pilot was able to land.

News helicopter footage showed damage to the left engine of the plane and the tarmac covered on foam from fire crews. Photos taken from inside the plane show a damaged left engine. The explosion punctured the side of the 737.

Twitter photo posted by Kristopher Johnson (@EMMS_MrJohnson) with caption: @SouthwestAir I want to thank the crew of SWA 1380 for a great job getting us to the ground safely after losing in engine #angelsinthesky&nbsp; &nbsp;

CBS News aviation and safety analyst Mark Rosenker says it looks like what is called an "uncontained failure."

"Not only does the aircraft engine stop operating and explode, but parts of the engine itself actually depart the engine potentially into the side of the aircraft," Rosenker explained.

Tracking data from FlightAware.com shows the flight was heading west over New York's southern tier when it abruptly turned toward Philadelphia.

There were 145 passengers and five crew members on board.

This is the first passenger fatality due to an aircraft incident in Southwest's 51-year history.

"We are deeply saddened to confirm that there is one fatality resulting from this accident," Southwest said. "The entire Southwest Airlines Family is devastated and extends its deepest, heartfelt sympathy to the Customers, Employees, Family Members, and loved ones affected by this tragic event. We have activated our emergency response team and are deploying every resource to support those affected by this tragedy."

USA Today and CBS News contributed to this report.