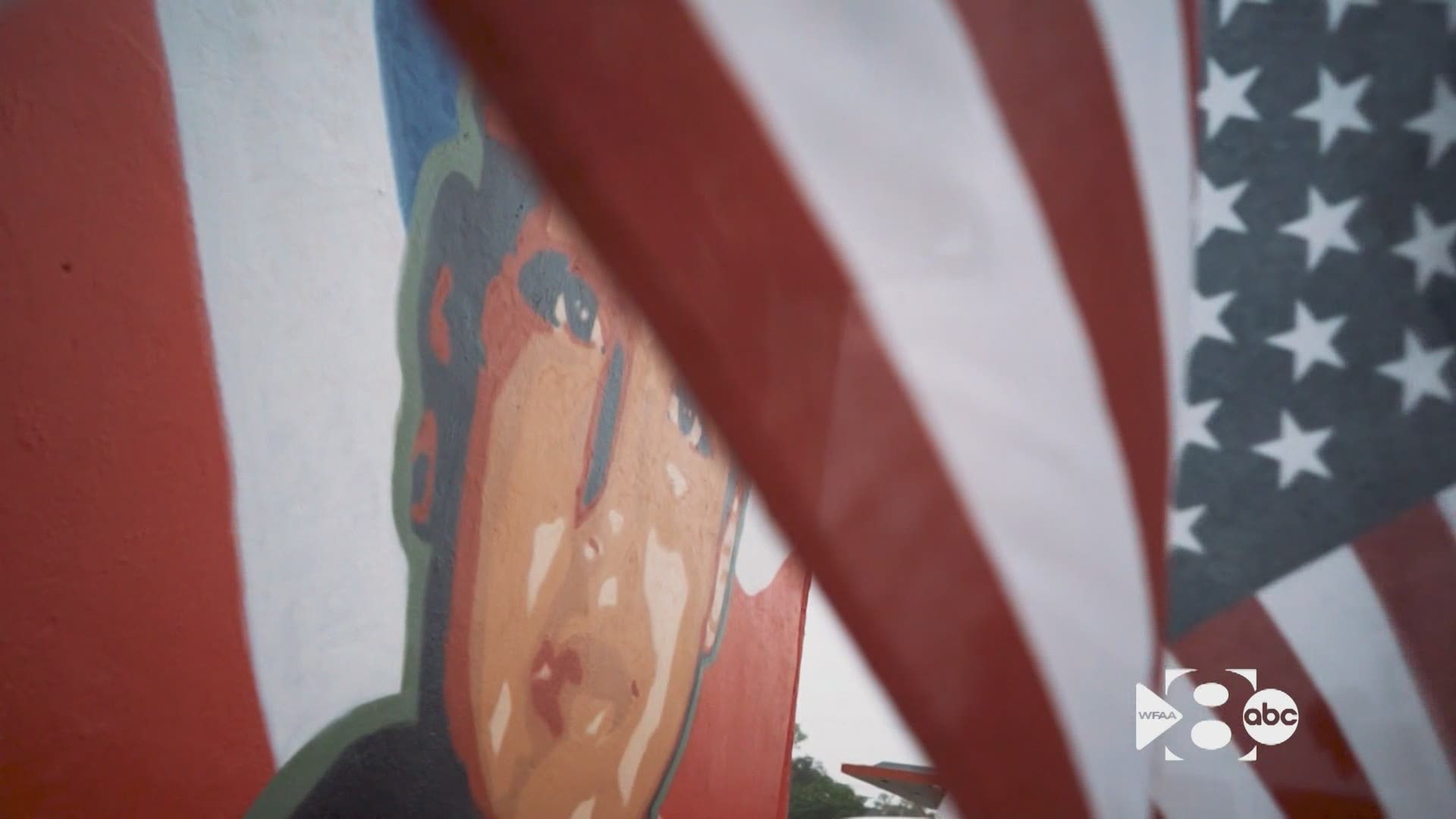 Fort Hood, Texas: It’s an Army post that has been placed under a microscope after two cases of missing soldiers ended in their deaths last year and made national headlines. The post and Army leaders have implemented top-to-bottom changes in hopes that it will never happen again.

From May 17-19, WFAA was granted exclusive access to see the changes at Fort Hood in Killeen. Among the adjustments are new processes to report sexual assault, harassment and better train leaders.

Vanessa joined the Army in June 2018 and was in the 3rd Cavalry Regiment. She drove three hours every weekend to see her family in Houston, arriving at the front door in her uniform. But on April 22, 2020, she vanished.

On June 30, Vanessa's remains were found along a river 25 miles away from Fort Hood.

Investigators say she was beaten to death on post by Army Specialist Aaron Robinson. He died by suicide after escaping the base during the investigation. His girlfriend Cecily Aguilar allegedly helped in the killing. She was indicted this week on 11 counts.

“Robinson was the one who allegedly murdered Vanessa, but overall, the U.S Army hurt my sister,” Lupe said.

Months later, an investigation into the handling of Guillen's case resulted in the suspension or firing of 21 Army members. The investigation found Vanessa was sexually harassed by a supervisor and leadership in her unit failed to act or investigate the allegations.

That supervisor was reprimanded and suspended. Natalie Khawam, a lawyer representing Guillen’s family, alleged Tuesday that the person is still on salary.

The Army’s investigation didn’t find a connection between the harassment and her murder.

"I've determined the issues at Fort Hood are directly related to leadership failures. Leaders drive culture and are responsible for everything the unit does,” said Army Secretary Ryan McCarthy in December 2020.

In May, Guillen’s sisters said Vanessa will bring needed change to the military, but they said knowing she paid the ultimate price is still painful.

"We are here to ensure her name won’t be forgotten and this change needs to happen, and it needs to happen now,” said Mayra Guillen, one of Vanessa's sisters.

RELATED: The Vanessa Guillen Act is now law in Texas

Soldiers at the base who knew Vanessa are still grieving.

A makeshift memorial that sits right outside the barracks where she lived depicts a smiling Vanessa with superimposed angel wings and a halo, surrounded by American flags. Flowers have been placed beneath it.

“A year is not a long time... Guillen will never be forgotten on Fort Hood, obviously, and throughout the majority of the world at this point,” explained Maj. Gabriela "Gabby" Thompson, a public affairs officer at the Army post. “There's not a day that goes by that I don’t hear Vanessa's name."

In the aftermath of her death, the Army said it knew there were things it could change: the experience for soldiers, trust in leaders and the culture.

“We are using this tragedy as a catalyst for change across the Army, not just at Fort Hood,” Thompson said.

The trust factor is to show that everybody matters – and the initiative is called Operation People First at III Corps, including Fort Bliss, Fort Carson, Fort Riley and Fort Hood. It was launched last fall.

"This is a big seismic culture change in our Army, because we’re going from doing these things behind closed doors to publicizing it,” said Col. Myles Caggins, the director of public affairs.

Fort Hood has a new commander of the 3rd Cavalry Regiment, Col. Kevin Bradley. He said it isn't easy coming into a new position after such a major event, but acknowledged changes needed to be made.

"Those aren’t quick or easy changes," Bradley said. "They’re gonna take a significant amount of time by all the leaders here to kind of commit to making this a place where everyone is proud to come to work and everyone felt like they were valued."

Bradley said the "people first" mentality means soldiers are human first. It’s about building trust between soldiers and leaders so that when an issue is raised, they will be confident that something will get done.

“We're all people first. And being a soldier - I mean there's so many different facets we can sit here and talk about,” Thompson said. “But at the end of the day you know, I’m a person, you’re a person, a three-star general. We’re all people.”

Leaders have also gone through extensive, updated training so they know every step of the process in reporting sexual assault and harassment. There are now 42 full-time professional victims advocates at Fort Hood.

Soldiers also go through training, which was created with their input, in order to prevent sexual harassment from happening in the first place. It’s about getting comfortable with uncomfortable conversations.

“We need to keep having those conversations, because [if not] we’re just gonna end up not having any progress,” Thompson said. “All of this will be for nothing.”

The process for reporting sexual harassment was changed so that now, allegations are investigated by an external investigator and an outside sister brigade.

"Now that a civilian is in charge, it's a little bit more calming," Vanessa's sister Mayra Guillen said.

Leaders are also now tested on whether they know the sexual harassment protocols before they can be promoted. They're also required to report misconduct. On the other end of the scale, leaders must spend a certain number of hours getting to know their soldiers in order to build more trust.

In 2020, 31,000 out of 38,000 soldiers and civilians at Fort Hood completed a confidential survey that was used to help mold the People First initiative.

“Everybody is a part of the cultural change,” Caggins, the public affairs director, said. “Each day, 38,000 are highly motivated and dedicated to serve our country. We are listening from the bottom up to change the quality of life. This is a great place to serve.”

The post has also added millions of dollars into housing improvements and added more training and mentorship programs.

The SHARP (sexual harassment assault response prevention) Program has been bolstered, by adding in-person simulations to the training.

Sisters in Arms is also a new women’s program that provides an open space to be, where women soldiers can gather and participate in mentorship. It's also for bonding, like through group taekwondo classes. The women in the group can also make suggestions to their commanders.

“I think that is so important for us females to get together, realize the issues we’re all having and figure out a way to work at it,” Davis said.

1 / 9
Eline de Bruijn/WFAA
The 3rd Cavalry Regiment participates in Brave Rifles Week at Fort Hood to celebrate the 175th anniversary of the regiment.

Leaders are also required to keep in touch with the families of soldiers, such as making phone calls and sending newsletters to let them know what soldiers are doing.

“I remember I went home, and I even saw it on the fridge. It was so nice,” said platoon Sgt. Ashlee Ibarra. “It makes you feel like, 'I'm part of something. I’m connected.'"

It’s a part of the effort to keep families informed and create a personal relationship to build trust, and, if a soldier goes missing, there is already an established point of contact.

The process for a missing soldier has been formalized across the Army. Under the new changes, if a soldier goes missing, the Army reaches out to the family more quickly. The timeline is also shorter for outreach, such as to police and the local news to help find the soldier.

There are also added lights and emergency call posts, and a missing person liaison. And instead of marking a soldier as “AWOL” (absent without leave), they are categorized as “absent - unknown category.”

As processes are updated, there's a physical change at the post, as well. A new gate was dedicated and named after Vanessa Guillen, since the gate leads to the barracks for the 3rd Cavalry Regiment.

"People think the Army, they put us on a pedestal,” Davis said. “We go through the same issues that everybody faces. We’re trying. And we’re trying to do everything we can to make sure everybody is safe and they’re part of the team here.

“It's like a regular community that you live in. There will always be problems we have to solve.”