Another former Baylor University football player will be prosecuted on sexual assault charges. 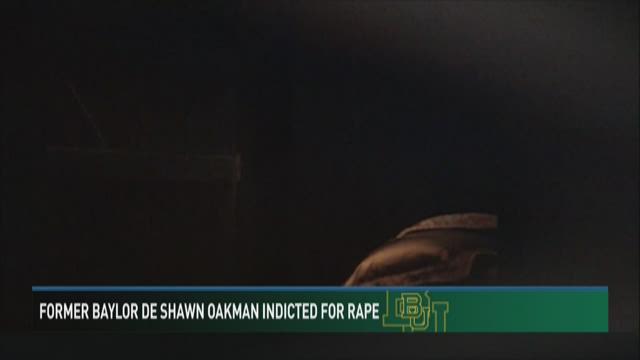 Another former Baylor University football player will be prosecuted on sexual assault charges.

A Waco grand jury returned a true bill indictment for Shawn Oakman Wednesday morning. The indictment comes after a Baylor graduate student accused him of rape earlier this year.

Oakman was arrested and booked into the McLennan County Jail for sexual assault after the alleged victim, who is listed as "Jane Doe" in the indictment, accused Oakman of raping her at his duplex near campus in the early morning hours of April 3rd. The two had been at Baylor hangout Scruffy Murphy's earlier in the night..

Oakman has maintained his innocence, saying they had consensual sex that night and numerous times before. His attorney said they were not shocked by the indictment, saying it's just part of the process.

"We hope to get this resolved in a way that Mr. Oakman can move forward with his life," said Michelle Simpson Tuegel, Oakman's defense attorney. " I mean, he's maintained his innocence that this was a consensual relationship, and so we're looking forward to presenting those facts in whatever forum that we can get this resolved in."

The ordeal unfolded just weeks before the NFL draft; Baylor's all-time leader in sacks wasn't drafter, and is now a free agent.

Oakman is the third Baylor player indicted since 2012 including Sam Ukwuachu and Tevin Elliot who were both convicted of rape.

"It's unfortunate in this situation that he's been lumped in with other events and things that are not related to his case," said Simpson Tuegel. "And we would hope that people wouldn't rush to judgment and that they would consider his case by itself, and that we will, at some point, have an opportunity to fully present the facts involved in his situation and we plan to do that and vigorously defend Shawn Oakman."

The 24-year-old has had to put his life on hold during this difficult process, according to Simpson Tuegel.

Simpson Tuegel said they have been reviewing discovery materials and conducting their own investigation since Oakman posted his $25,000 bond on April 13th.

Once Oakman is re-booked into jail, he'll be arraigned and given a post-indictment bond, then wait for a court date, according to McLennan County District Attorney Abel Reyna.

"We respect and agree with the Grand Jury's decision. We look forward to presenting our case in court."

It's unclear where Oakman will be coming to jail from; Simpson Tuegel wouldn't specify Oakman's location, but said he was living in different places, surrounded by family and friends, preparing for any athletic opportunity that arises.

Shawn Oakman and the complainant had a previous intimate relationship that included numerous consensual sexual encounters that occurred over a period of time before the alleged incident on April 3, 2016."