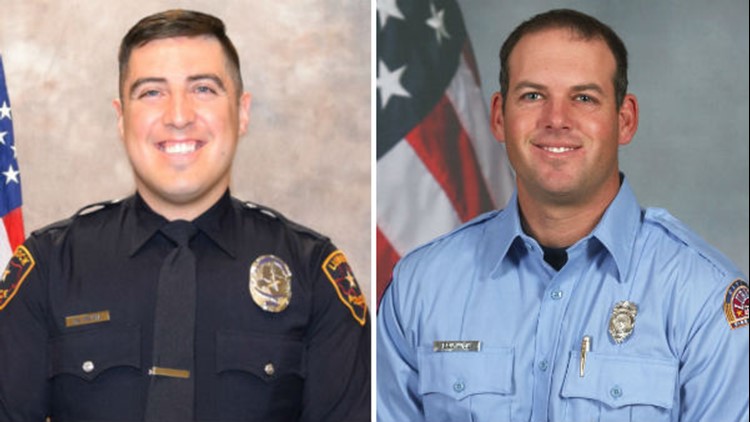 LUBBOCK, Texas — A Lubbock police officer and firefighter are dead after being struck by a vehicle while working two accident scenes on Interstate 27, Lubbock Police Chief Floyd Mitchell confirmed.

The officers have been identified as 27-year-old Nicholas Reyna and 39-year-old Eric Hill.

Mitchell said officers and firefighters were called to a single-vehicle rollover crash on I-27 at approximately 8:19 a.m. Saturday. It appeared the vehicle was traveling southbound and crossed the median into the northbound lanes where it rolled over, Mitchell said.

Emergency crews arrived on scene at about 8:36 a.m.

While investigating this scene, another vehicle carrying a trailer was traveling southbound on I-27 when it crossed over the median and came to a stop in the northbound lanes -- about 25 to 50 yards away from the first accident scene, Mitchell confirmed.

Police and firefighters spread their resources to work both accidents, and while investigating, a third vehicle traveling southbound on I-27 crossed over the median and struck one Lubbock police officer and two Lubbock firefighters, Mitchell said.

That vehicle came to a rest in an embankment.

Reyna, who has been with LBD for a little over a year, was pronounced dead at the scene.

The two firefighters were quickly transported to a nearby hospital.

One of the firefighters died at the hospital. The other remains in very critical condition.

During a press conference, officials blamed road conditions for the string of accidents.

“When road conditions get this bad we need people to understand that they need to slow down," Police Chief Floyd Mitchell said.

Accident investigators are mapping the scene and looking at all factors to see if any charges will be filed.