WATCH: Reward increase for information in package explosions in Austin 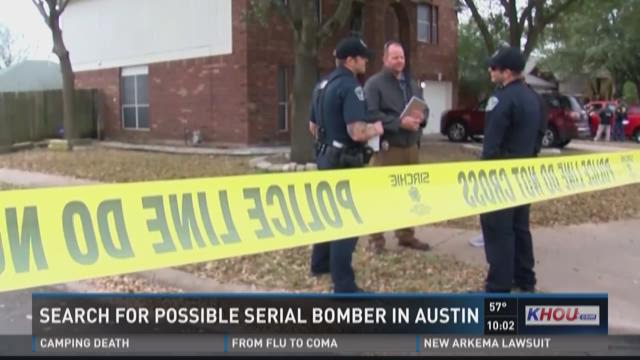 The FBI and ATF, including at least one agent from Houston, are assisting Austin police on a task force that will work around the clock on the case.

In pairs, FBI agents roamed three Austin neighborhoods and interviewed neighbors worried about what will happen next. In the last 10 days, three package explosions killed two people and hurt two others.

“Is it going to happen again,” David Marchan, one victim’s neighbor asked. “Where? When? Why? Who? Who is doing this? We don’t know.”

A package exploded and killed a 39-year-old man in northeast Austin March 2.

Early Monday morning 911 calls led Austin police east of downtown where a package left on someone’s doorstep killed a 17-year-old who tried to open it.

“She would always say hi,” he said. “(She) always said hi to you, no matter if you pass by the street, she would say hi.”

Each exploding package was an “average size, box-type delivery,” according to Austin police. None came from the post office or any other known shipping company, investigators said. Authorities believe the same person or people are behind all three. Investigators cannot yet name suspects, motive or say what type of explosive was used.

Austin Police Chief Brian Manley warned people to avoid touching packages they do not expect to arrive. Instead, he asked them to call police about anything suspicious. Calls flooded dispatchers all day.

Bridget Dickerson came home from work alarmed by an open gate. She lives behind one of the victims and shared her concern with FBI agents.

“I think here in Houston, obviously, what can happen there can happen here,” he said. “It’s just a moment that we could all learn from.”

Like those in Austin, he is wary until officers arrest those responsible for the explosions.

“It’s not right somebody doing something to innocent people like that,” said Alex Marchan, another neighbor of a victim.