Chuck Yielding can't be in the hospital during his son's treatments. But he can dance. 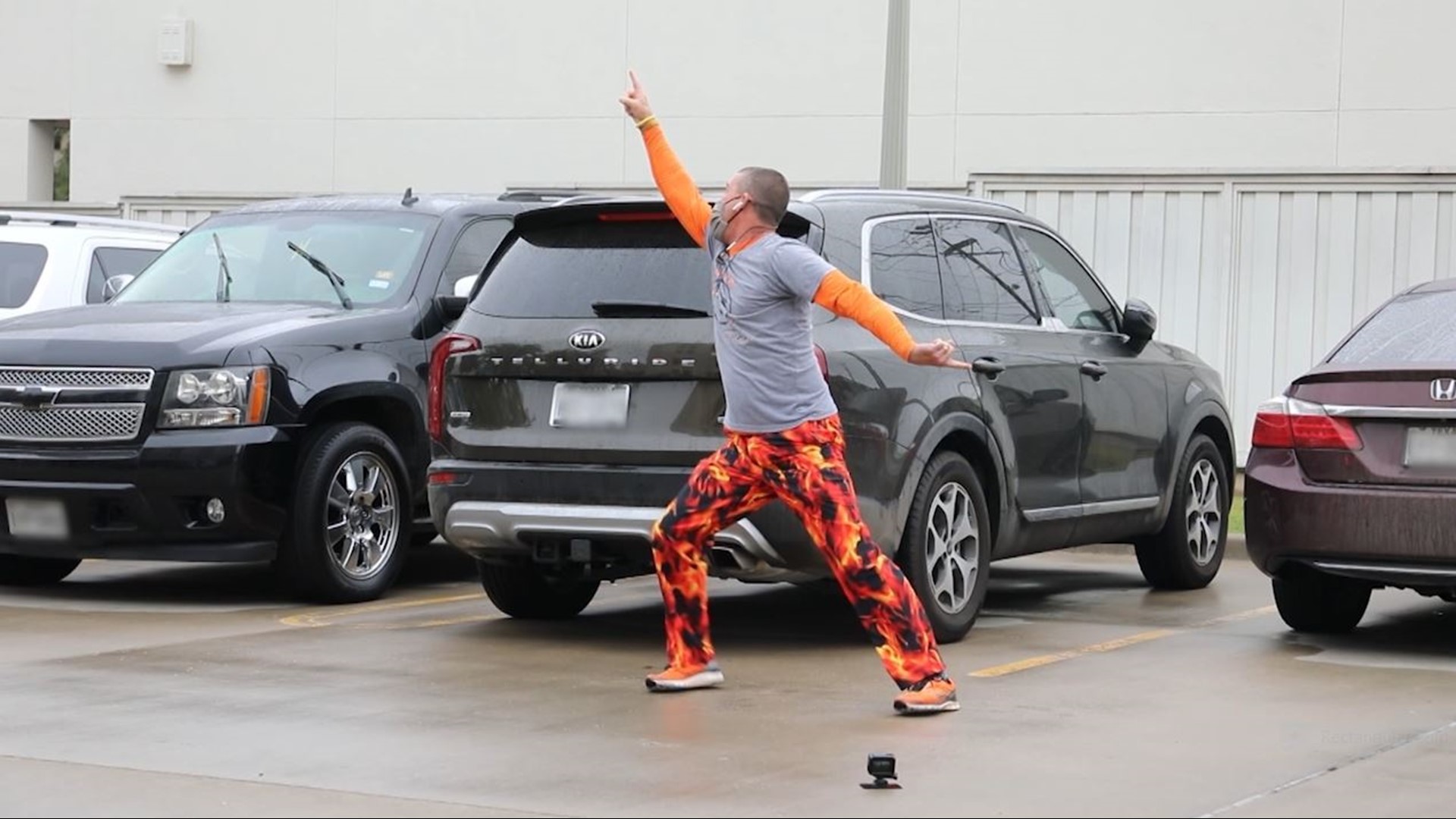 FORT WORTH, Texas — This is a story for all you dads out there, the ones who like to embarrass your kids with some of your best bad-dad-dancing moves at any public gathering.

And if you're in Fort Worth and you see a dad dressed in brightly-colored clothing dancing in the parking lot of Cook Children's Hospital, you're witnessing a devoted dad doing everything he can to keep his son smiling and fighting.

Fourteen-year-old Aiden Yielding got a scary diagnosis in May of this year: acute lymphocytic leukemia. His family opted for treatment in Fort Worth through a clinical trial, a treatment program called the Total 17 Protocol through St. Jude Children's Research Hospital. He is currently in the maintenance phase which requires weekly visits to Cook Children's for checkups and treatments every Tuesday for up to two-and-a-half years.

And, with COVID-19 precautions at the hospital, only one parent at a time is allowed to be by his side during those treatments. The other parent has to wait outside the hospital.

"You know, I just didn't like the thought of not being there," Aiden's dad Chuck Yielding said.

"And I think Chuck just saw how rough of a time he was having and said, 'Hey, bring him to the window,'" Aiden's mom Lori Yielding said.

And when Aiden looked out the window that first day last April, he saw his dad in the parking lot dancing everything from The Sprinkler to The Lawnmower to Saturday Night Fever to The Shopping Cart, and a bit of Michael Jackson thrown in for good measure. Aiden watched from an upper window at Cook Children's, and, linked to his dad by cell phone and earbuds, has been dancing in unison every Tuesday since.

"Dance moves that I've definitely seen over the years at weddings and events," Lori laughed.

"I've always been a little off," Chuck Yielding joked.

"Well it's definitely unique to have a few dance moves we do every single time," Aiden said in a remote Zoom interview with his parents.

"And I blame him," Chuck Yielding said of his son, "because he made up some of the dance moves we do so he's personally to blame."

Lori Yielding works at the hospital as a nurse anesthetist. So she's the logical choice to be in the hospital with Aiden. So every Tuesday since the month of May, Chuck Yielding makes sure he's at the hospital too, often providing dance entertainment for his son and for a growing following of hospital staff and visitors.

"I'm a protector," Chuck Yielding said of his reasons for being present at every hospital visit. "And it's hard whenever your kid is going through this of course. They're gonna make fun of me for crying," he said. He became emotional talking about his son. "But I get upset about it. But I think a big fear I have is not being able to be there. And being there is important to me."

It's also important to them that they help others in worse situations than their own. So, they'll hold a blood drive October 3rd in Fort Worth. And, by taking part in the St. Jude clinical trial, Aiden may be helping doctors learn new techniques and treatments to help other children diagnosed with leukemia.

"Being able to help other people through what we're going through, I mean that's pretty awesome if you ask me. That's a pretty noble thing," Chuck Yielding said of his son.

In the meantime, every Tuesday, you'll find a dad dancing in the Cook Children's parking lot, just to brighten a son's tough day.

"It's tough," Aiden said of the treatments. "But I just keep smiling," he said with both thumbs up.

Smiling knowing his that parents are with him every step of the way.

Even if those steps include the Hustle and the Electric Slide.