ATCEMS reported Wednesday morning two cranes had collided, resulting in 22 people being injured, including 16 people being transported to the hospital. 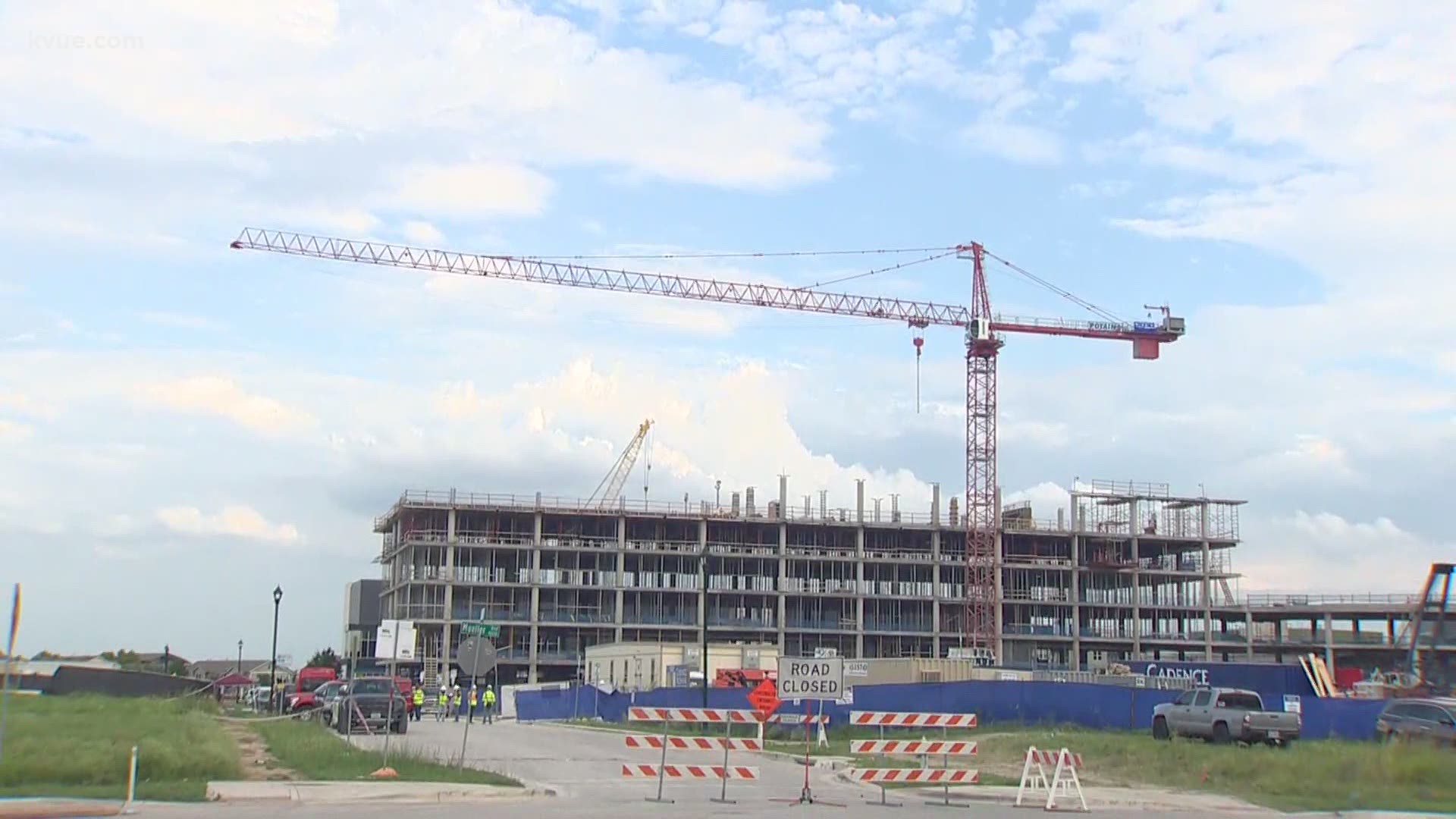 AUSTIN, Texas — Twenty-two have been injured after two cranes collided and became entangled near the Mueller development just east of Interstate 35 in Austin, according to KVUE Senior Reporter Tony Plothetski.

Initial reports indicated there was a crane collapse, Plohetski said. Officials later described the incident in a news conference as a collision and entanglement of two cranes, and stressed it was not a collapse.

Austin Travis-County EMS (ATCEMS) confirmed medics responded to the scene in the 1600 block of Robert Browning St., which is in the Mueller development area. ATCEMS reported Wednesday morning two cranes had collided, resulting in at least 22 people being injured.

Twenty people were evaluated by EMS officials. Sixteen people were taken to the hospital, three people refused transport and three were considered "no patients," according to ATCEMS, making up the 22 total victim count. EMS officials said in a news conference that all of the victims were workers at the site and most of the injuries occurred as the workers tried leaving the area.

EMS officials said that no deaths have been reported. KVUE's Tony Plohetski is reporting the injuries appear to be mostly minor, with one possible exception.

While there have been zero reported deaths in this incident, according to data from the Bureau of Labor Statistics, Texas had more fatal occupational injuries (50) due to cranes as the next three states combined (16 in Florida, 16 in New York, and 14 in California) from 2011 to 2017. According to the Occupational Safety and Health Administration (OSHA), there has only been one fatal accident involving a crane in 2020, five in 2019 and 13 in 2018.

Two people were seen working at the tip of the crane to assess the situation. KVUE's Luis de Leon reported the workers were on their way back down the crane.

UPDATE: it would appear the workers we were showing you before are now on their way back down. @KVUE pic.twitter.com/QVowlslBSr

Officials said in the news conference that wind continued to be a concern. AFD crews have deployed two drones to gather a 360-degree view of the entanglement of the drone so officials can make determinations on how to proceed.

official update: no one is trapped or injured and crews are trying to make sure the scene is stable and secure. An AFD drone will go up to get a 360° video of the crane wire entanglement. pic.twitter.com/wPBuwBtNeq

An OSHA representative confirmed Wednesday that Cadence McShane will be part of its investigation.

Cadence McShane began construction on "Alpha Building": a new, six-story, class-A office building and garage in Austin’s Mueller neighborhood, according to a December 2019 company press release. The Alpha Building is the first of three development sites with capacity for a total of four office buildings and over 795,000 square feet of office space.

Sources close to the project have confirmed to KVUE this is the Alpha construction site.

"At Cadence McShane Construction Company, our number one concern is the health and safety of our employees. Today in east Austin there was an incident involving two cranes. Thankfully, there have been no life-threatening injuries, but we are investigating the incident with the Authorities Having Jurisdiction. We are in close contact with our subcontractors, local authorities, and our on-site team to better understand what transpired.  More importantly, we are working with the crane subcontractor and the fire department to ensure the damaged crane is safely dismantled. Since this is an ongoing investigation, we cannot provide additional details at this time."

A spokesperson for Ascension provided the following statement:

"We've been alerted about a structural collapse incident at 1600 Robert Browning Street. This is not Dell Children's Medical Center structure, and does not impact operations at Dell Children's. The situation is evolving and due to patient privacy regulations, we cannot confirm if patients have been transported to an Ascension Seton site of care at this time."

The cranes were separated just before 6 p.m. Wednesday. The roads near the corner of Robert Browning Street and Mueller Boulevard remained blocked off as of 10 p.m. even though the scene had quieted down.

UPDATE: it would appear crews have separated the two cranes. They lowered the one on the left to its position now. pic.twitter.com/SXZRqb3m2S