The Austin City Council approved an ordinance Friday morning that would require all employers in the city to offer employees paid sick leave. 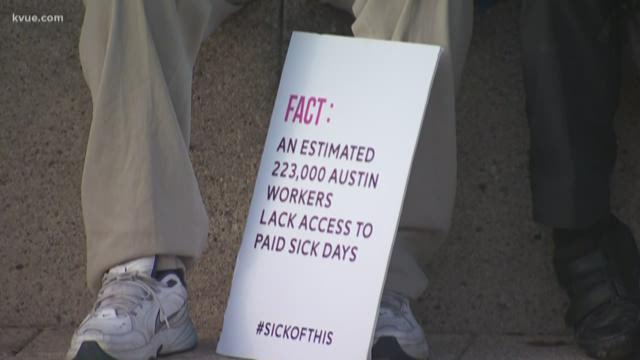 AUSTIN, Texas -- The Austin City Council voted early Friday morning to pass an ordinance that requires all employers in the city to offer employees paid sick leave, making Austin the first city in Texas to do so.

The motion passed 9-2 with council members Ora Houston and Ellen Troxclair against it, according to KVUE's media partners at the Austin American-Statesman.

The proposed ordinance would require Austin businesses give employees one hour of sick time for every 30 hours worked, up to 64 hours. Employees could use the time on themselves or take care of a family member, and any unused time could be carried over to the next year. Employers who violate the policy could be fined up to $500 by the city.

Tuesday, supporters talked about why the ordinance is good for the city, calling it a public safety matter.

"Our ordinance recognizes that everyone gets sick and that no one should have to choose between their job and taking care of their health. We are driving forward an ordinance that protects everyone," said Council Member Greg Casar, who sponsored the ordinance.

But Thursday, those opposing the ordinance had their own news conference. Council Member Ellen Troxclair said the measure is being rushed through.

"I think the first sign that something is not a good policy is that the City of Austin doesn't do it for their own employees and has no idea how much it's going to cost to implement it," Troxclair said.

Troxclair was joined by business owners like Tom Kenney, the owner of Napa Flats in west Austin, who said this issue isn't so cut and dry.

Kenney noted his restaurant offers entry level jobs for high school and college students and a "one-size-fits-all" ordinance won't allow his business to be successful.

"We can accommodate. If you call in sick, you have a test, you have a reason you can't work on Tuesday. We can allow you to make up a shift on another day, so you have no lost income. So why is there no accommodation in this ordinance?" Kenney said.