Ryan Nichols, of Longview, and Alex Harkrider, of Carthage, were booked into the Smith County Jail and Gregg County Jail, respectively, on Monday. 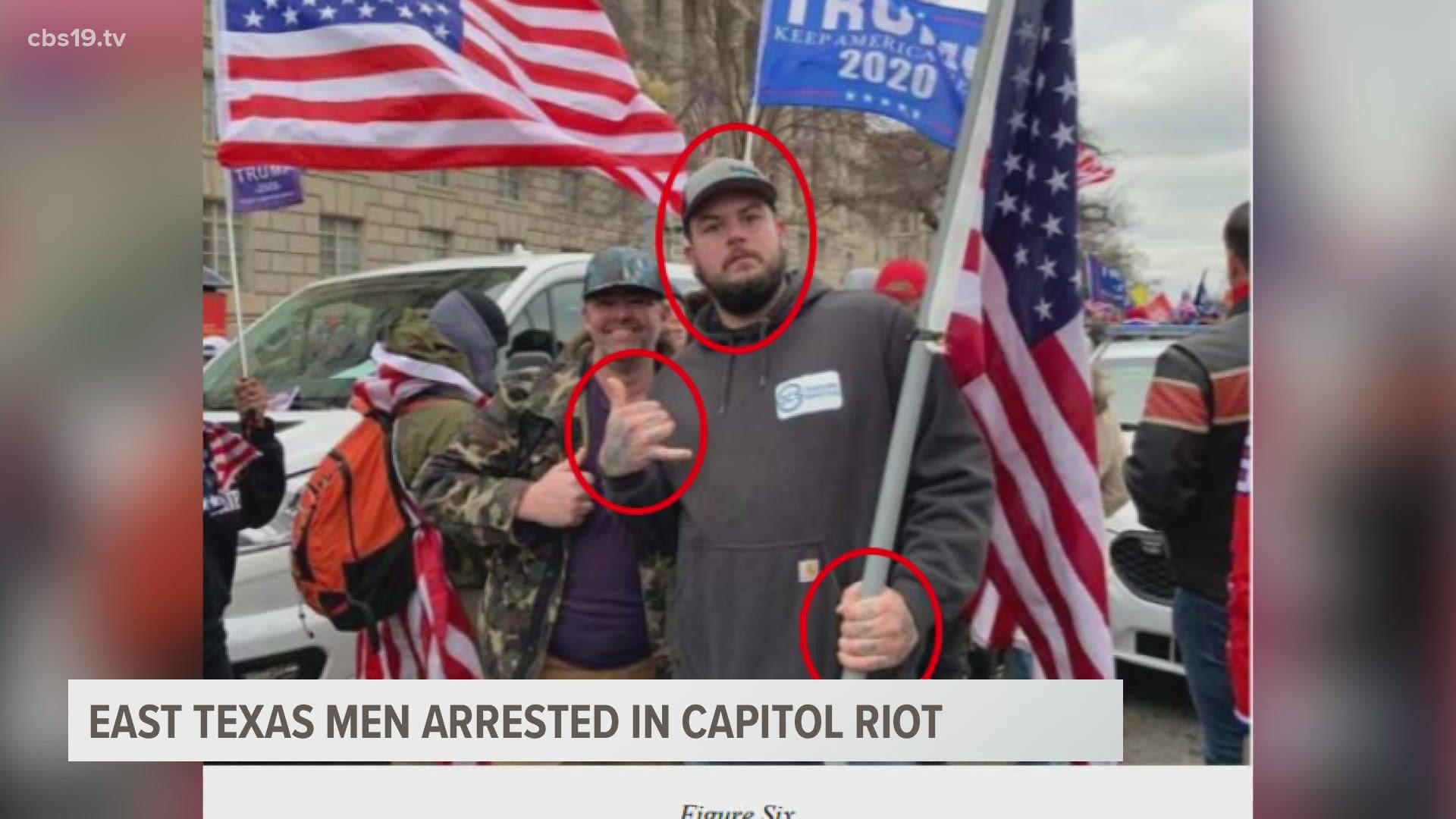 LONGVIEW, Texas — Two East Texas men have been arrested in connection with the Jan. 6 riot at the U.S. Capitol.

According to judicial records, Ryan Nichols, 30, of Longview, and Alex Harkrider, 33, of Carthage, were booked into the Smith County Jail and Gregg County Jail, respectively, on Monday.

Nichols was charged with the following crimes:

Harkrider was charged with:

Nichols was arrested by the Federal Bureau of Investigation (FBI), while Harkrider was taken into custody by the United States Marshals Service (USMS).

Nichols was formerly a realtor with Texas Real Estate Executives, but the group tells CBS19 he was terminated when they found out about his alleged involvement in the riot. The Longview Area Association of Realtors also says he is no longer part of their group as of Jan. 13.

The duo was seen on multiple social media posts outside the U.S. Capitol when the riot took place.

According to our news partners, the Longview News-Journal, a video posted to Nichols' Facebook page that was later deleted shows a man who looks like Nichols shooting pepper spray into a Capitol building office.

Other photos posted to Nichols' Facebook page that also have been removed show Nichols and Harkrider outside the Capitol among a crowd.

According to the arrest affidavit from the U.S. Department of Justice (DOJ), on Jan. 7, a witness contacted the FBI’s National Threat Operations Center (NTOC) to report Nichols and Harkrider as two of the people who broke into the U.S. Capitol during the riot the day prior. The witnesses identified the duo's social media accounts.

"W-1 [the witness] provided several images that W-1 captured from Nichols’ Facebook account that are consistent with other media recovered by the FBI depicting both men at the U.S. Capitol on January 6, 2021," the affidavit stated. "On January 9, 2021, a second witness (W-2) contacted the FBI NTOC to report two men who 'were present and participate[d] in the insurrection [at] the Capitol building..'"

"Based on the information provided by W-1 and W-2, information obtained through subsequent investigation described below, and information obtained from government databases, law enforcement has identified Nichols, a 30-year-old white male and resident of Longview, Texas, and Harkrider, and 32-year-old white male and resident of Carthage, Texas, as the individuals identified by W-1 and W-2 and as the individuals appearing in the photographs and videos described below that establish their unlawful conduct on January 6, 2021, at the U.S. Capitol. Driver’s license photographs of Nichols and Harkrider obtained by law enforcement appear in Figures 1 and 2 below."

During its investigation, the FBI conducted open source internet searches of social media, news, and other media for information pertaining to Nichols and Harkrider.

"Investigators located photographs, including screenshots of Nichols’ Facebook page, and video posted on the Internet depicting both men present and engaged in criminal activity during the assault on the U.S. Capitol on January 6, 2021," the DOJ said. "For example, Figure 3 below appears to be a screenshot of Nichols’ Facebook account and depicts Nichols and Harkrider in two photographs at the U.S. Capitol on January 6, 2021, as evidenced by the U.S. Capitol building and the crowd visible in the photographs, which is captioned, 'We’re in.' In the photos, Nichols appears with a beard and wearing a Marine Corps camouflage hat, American flag face cover around his neck, and a blue jacket, and Harkrider appears with a beard and wearing a blue and gray baseball hat with a Star on it and a tan jacket."

"Additional photos and screenshots of Nichols’ Facebook account appear below in Figures 4 and 5, which show Nichols’ Facebook profile including a photo of himself and Harkrider at the U.S. Capitol," the affidavit stated. "In the photo, Nichols is shown holding a red bullhorn and Harkrider is wearing a tactical vest under his tan jacket."

"A screenshot of a Facebook post by Nichols, shown below in Figure 6, contains the same photograph appearing in Figures 5 and 6. However, Harkrider is tagged in the post, which also indicates that both men are in Washington, D.C. The caption first states that the men were standing in front of a smashed window into Speaker of the House Nancy Pelosi’s Office but then states that Speaker Pelosi’s office was 'around the other side of the building.' Also included is the statement 'We ain’t done yet! We just got started!' As indicated in Figure 6, the photograph shows Nichols and Harkrider wearing distinct clothing that is visible in other photos and video of the two men at the U.S. Capitol."

The DOJ reports additional photographs and video obtained during the investigation show Nichols and Harkrider standing on the ledge of a U.S. Capitol window that is broken, with Nichols holding a bullhorn and a crowbar. In a video obtained online, the DOJ says Nichols can be identified in the crowd at the U.S. Capitol based on his appearance and distinct clothing, and he can be seen and heard yelling into the bullhorn in the direction of the large crowd, “If you have a weapon, you need to get your weapon!”

"As shown in another video, Nichols can be seen and heard yelling, 'This is the second revolution right here folks! […] This is not a peaceful protest,'" the affidavit stated. "Additional video shows that, close in time to these events, at least dozens of individuals were actively forcing their way inside the U.S. Capitol building through an entrance in the immediate vicinity of Nichols and Harkrider. Figure 7 below shows Nichols and Harkrider on the window ledge and depicts their clothing, as well as the bullhorn and crowbar held by NICHOLS."

"Additional video evidence shows Nichols near an entrance to the U.S. Capitol building in a large crowd actively forcing entry into the building, which was guarded by U.S. Capitol Police. During the video, a screenshot of which is shown below, Nichols can be seen taking a large, red aerosol canister from another person in the crowd and spraying an unknown agent, believed based on its appearance to be OC/pepper spray, in the direction of the entrance into the U.S. Capitol building, where federal law enforcement officers were engaged in the performance of official duties, that is, seeking to restrain the mob of individuals who were forcing entry. Figures 8 and 9 below are still shots from the OC/pepper spray video, with arrows indicating NICHOLS’ clothing and the suspected OC/pepper canister."

The DOJ says additional video, a still shot of which is shown in Figure 10 below, also depicts Nichols and Harkrider pushing with the large crowd against the same entrance to the U.S. Capitol that was guarded by U.S. Capitol Police. In the video, the crowd appears to be chanting “Heave! Ho!” as it rocks back and forth in the direction of the entrance, according to the DOJ.

"Additional video, a still shot of which is shown in Figure 11 below, depicts Harkrider leaning out from within the U.S. Capitol through a broken window, which is the same window where Nichols and Harkrider were standing while Nichols was yelling into the bullhorn, as noted above," the DOJ stated. "In the video, Harkrider is seen retreating back from the window and inside the U.S. Capitol building."

"Additional images, shown in Figure 12 below, depict Nichols and Harkrider outside the U.S. Capitol building and apparently inside the building, based on the identifiable arched Capitol window and other contents of the photo," the DOJ said.

"Figure 13, shown below, is a screenshot from a photograph apparently shared by Harkrider on Snapchat and obtained by investigators online. Snapchat is a messaging application which enables users to share photographs and videos with captions. The photograph depicts Harkrider inside a building identifiable as the U.S. Capitol on January 6, 2021, based the contents of the image, including Harkrider’s clothing and the crowd of persons in the background. The caption to the photograph reads, “We’re in. 2 people killed already. We need all the patriots of this country to rally the f*** up and fight for our freedom or it’s gone forever. Give us liberty, or give us death. We won’t stand for it.” The photograph also appears to show a baton inside Harkrider’s jacket or vest and labeled “Weapon."

"In another screenshot of Nichols’ Facebook page obtained by investigators, shown in Figure 16 below, Nichols and Harkrider appear in front of the large crowd at the U.S. Capitol" the affidavit states. "The title of the Facebook post is, “Ryan Nichols is...feeling pissed off with Alex Harkrider at United States Capitol.” The text of the post states: “Patriots stood their ground today! We aren’t done yet, either! You want to steal our election, and not hear us in court? Good! Now you’ll hear our civil unrest!”

"A second Facebook profile was identified by law enforcement as belonging to Nichols (facebook.com/dontlistentoryan)," according to the affidavit. "The profile photograph of this Facebook Account shows a picture of Nichols and the account contains a Facebook live video of Nichols and Harkrider as well as other photographs of Nichols and Harkrider. Throughout December 2020, Nichols made several posts to this Facebook account about coming to Washington, D.C. on January 6, 2021. On December 24, 2020, Nichols posted the image in Figure 17 below, which shows a bullet and states, “By Bullet or Ballot, Restoration of the Republic is Coming.”

"On January 7, 2021, Nichols posted a Facebook message, shown below in Figure 18 that reads in part: “Listen up: I hear so many reports of ‘Antifa’ was storming the capital [sic] building. Know that every single person who believes that narrative have been DUPED AGAIN! Sure, there may have been some ‘Antifa’ in DC, but there wasn't enough to ‘Storm the Capital’ [sic] themselves.” In response to this post, another Facebook commented on this post with Nichols’ residential address," the affidavit stated.

This is a breaking news story and CBS19 will update this article as more information becomes available.

RELATED: East Texas man, cousin arrested in connection with riot at US Capitol

RELATED: Wylie man, believed to be member of 'militia extremist group,' arrested in connection to US Capitol attack