This year, at least in Harris County, which has the most registered voters in Texas, experts say more people may be inclined to vote early because of Hurricane Harvey. 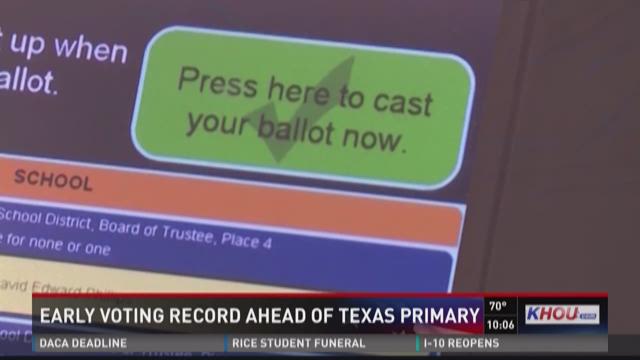 HOUSTON -- Texas' primary election will be held Tuesday. The Texas Secretary of State compiled and posted early voting data for the 15 most populous counties online.

More than 885,000 people, within those counties, cast a ballot during early voting. The unofficial total shattered the record set in 2014 by roughly 300,000 votes.

In Harris County alone there were 81,537 early voters with a potential total of 92,041 votes when you consider ballots that were mailed.

> Polls open at 7 a.m. Tuesday and close at 7 p.m. Tuesday. KHOU.com is your election headquarters with sample ballots, polling locations and live results throughout the evening both on-air and online.

"That doesn’t necessarily mean that we’re heading for a record voter turnout," said KHOU 11 Political Analyst Bob Stein. "It could mean that more people are voting early than rather on Election Day."

Political analysts like Stein have tracked an increasing number of voters who, over the last decade, have chosen to vote early.

This year, at least in Harris County, which has the most registered voters in Texas, experts say more people may be inclined to vote early because of Hurricane Harvey. The August 2017 storm forced thousands of families to seek temporary shelter after their homes were damaged. Harris County's Clerk, Stan Stanart, has said the county had to find new election day locations after some were damaged during the hurricane.

Logistically, it's easier for some to vote early, because voters aren't required to cast their ballot at a specific location like they are on election day.

There are also several races on the ballot which have more than two candidates per race.

"When you have more candidates, they will spend more money, make more phone calls, mail more literature and that will turn out more voters," Stein said. "Open seats tend to create competition and Republicans can come out. The question is, who are they voting for?"

While the early voting record is grabbing headlines, Stein says, "We don’t know until we see what happens on election day, whether this record early voting translates into record turn out."