Texas bullet train: What you need to know

The Texas Bullet train, a privately-funded $12 billion project could be in operation by 2024. But before construction can begin, property owners along the proposed route need to weigh in first. 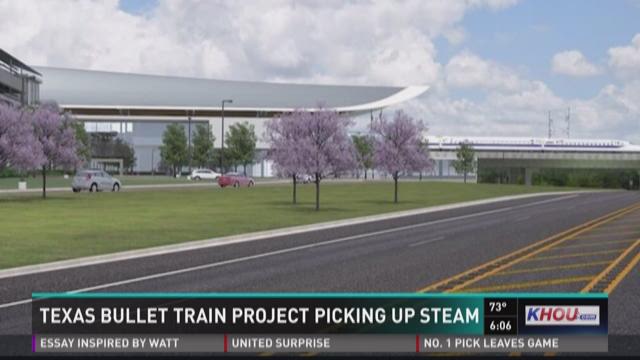 The Texas bullet train project is picking up steam. Harris County residents can attend a public meeting about the project on Monday.

KHOU 11 viewers have many questions about the project. Here's what we know so far:

At up to 205 miles per hour, the bullet train will move passengers between Houston and Dallas in 90 minutes.

The route is broken up into segments, and the private company, Texas Central, that's funding the project, says construction could start as early as 2019 with a possible completion date of 2024.

Texas Central will use the Japanese N700 Tokaido Shinkansen system. The project is estimated to cost $12 billion and will be funded entirely by investors -- no tax dollars.

While Texas Central has already identified the location for the Dallas terminal, a 60-acre plot of land south of I-30 and I-35 near Hutchinson Convention Center in the Cedars neighborhood, it has not finalized the location of the Houston terminal. Though Texas Central does say the Houston terminal will be located outside of the 610 Loop, between I-10 and Highway 290.

Related: Here's what the proposed Dallas bullet train station could look like

The Federal Railroad Administration sent letters last month to notify Harris County property owners they may directly or indirectly be impacted by the bullet train.