Who will be Houston's next mayor and what issues are likely voters most concerned about? Our exclusive mayoral poll answers those questions and more. 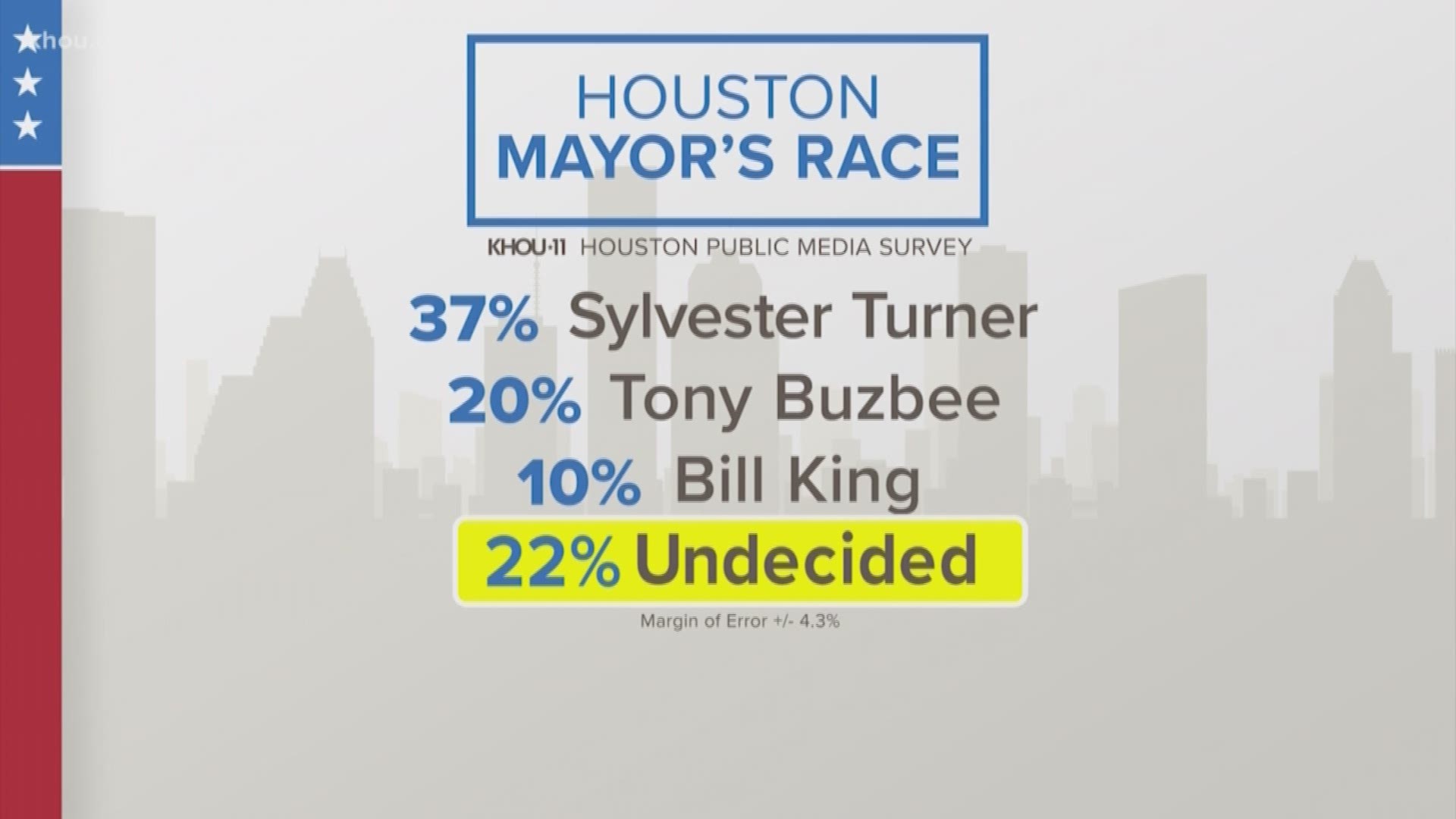 HOUSTON — The race for Houston City Hall is heating up, and KHOU political analyst Bob Stein said there is a clear front-runner.

In our exclusive KHOU 11/Houston Public Media Mayoral Poll, we asked 516 registered voters to weigh in on everything from who they want to be Houston’s next mayor to what issues matter most to them.

In the mayoral race that will be decided on Nov. 5, Mayor Sylvester Turner leads the pack, followed by Tony Buzbee and Bill King.

Twenty-two percent of all voters are undecided and 5 percent wouldn’t say who they support.

More than half of Houstonians are happy with Turner’s performance, according to our poll.

Only three percent are undecided on the performance issue.

Houston’s mayoral race is supposed to be non-partisan, and the candidates aren’t identified by political party. But Stein believes politics will play a role this time around because of the polarized political scene nationwide.

“This is a non-partisan election and we often say that all politics is local -- what’s going on in Washington or Austin really doesn’t impact what happens here in Houston,” Stein explained. “With police and fire and crime and traffic congestion, that’s not the case.”

That was clear in the ad Turner ran the night of the Democratic Presidential Debate at TSU in Houston, reminding voters that Buzbee held a fundraiser for President Trump.

And in a city that voted overwhelmingly for Democrats like Hillary Clinton and Beto O’Rourke, that may be all he needs.

In our KHOU 11/Houston Public Media poll, 42 percent of voters said it was very important or important for the next mayor of Houston to be a Democrat. Stein predicts that won’t stop Buzbee from forcing Turner into a runoff as the challenger continues to play hardball with his ads.

“We have seen Buzbee accuse the mayor of ‘pay-to-play politics,’ taking campaign contributions from people who do business with the city,” Stein said.

If there’s a runoff, our poll says Turner wins it 54 percent to Buzbee’s 40 percent.

Even though the KHOU 11/Houston Public Media Poll was conducted before Tropical Storm Imelda drenched Southeast Texas, flooding is still the top concern.

Though it wasn’t as important as a stand-alone issue, 48 percent of respondents rate making improvements in public transportation a higher priority than building bigger and better roads (26%) or developing more communities where people can live closer to where they work and shop (19%).

Along the same lines, Nearly 60 percent of those polled support Metro’s $3.5 billion bond proposal that includes expanding light rail to Hobby Airport and a faster bus route to Bush. Thirty-one percent of voters are still undecided.

Turnout is the key

Fifty-eight percent of the voters believe the city is headed in the right direction, compared to 30 percent who believe it’s headed in the wrong direction. The rest are undecided.

But Stein points out that people don’t always vote on issues. He says proof of that is how former Harris County Judge Ed Emmett lost his seat to newcomer  Lina Hidalgo.

Stein predicts voter turnout will be the key.

“If we see the kind of numbers I’m seeing in this poll for the mayor’s race and other down-ballot races, we’ll see the highest turnout rate the city’s ever seen since we went to a mixed form of representation,” Stein said.

An earlier version of this story indicated 500 people were surveyed. The actual number has been updated to 516.