HOUSTON – Testing done along the Hazard Street Bridge in west Houston found dangerous pollution here with the highest reading coming between 5 and 9 a.m. 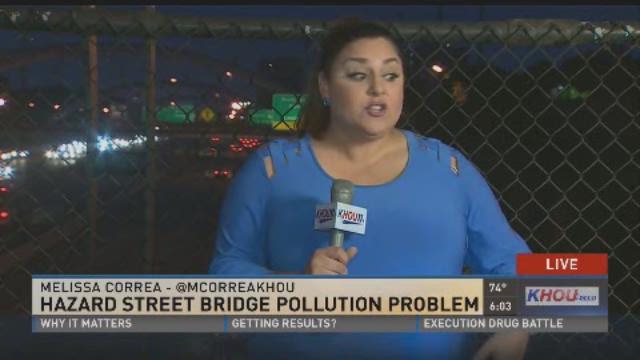 HOUSTON – Testing done along the Hazard Street Bridge in west Houston found dangerous pollution here with the highest reading coming between 5 and 9 a.m.

It tracked tiny air particles called PM 2.5. Too much of it can trigger everything from major respiratory problems to premature death.

The air pollution along this stretch of the Southwest Freeway comes specifically from vehicles. And, the air is not required to be "cleaned" like it would be at industrial sites.

Air Alliance Houston, which sparked the study, will release its findings to the public soon.

Food for thought as you make your morning commute: #khou11 pic.twitter.com/6scpk1NBof

Outreach to all the folks who literally live along this part of freeway will likely happen.

“So we would expect that people within about 1,000 feet or so of this roadway would be exposed to the worst of it,” Adrian Shelley, executive director of Air Alliance Houston, said. “People know that they're taking risks when they choose to live in this city. But they might not necessarily think about specific risks in specific areas.”

The greenery along the walls of the Southwest Freeway could help as well as the fact that this stretch is sunken below neighboring homes. More studies will need to be done to figure all that out.

And while this portion of the freeway was targeted, scientists say high pockets of pollution are likely along all Houston highways. This one just literally runs through a neighborhood.

Some things to think about as you cruise through the freeway this morning.