A family in Spring is taking Klein Independent School District to federal court. They claim the district did nothing to help their daughter who was allegedly bullied relentlessly for years. 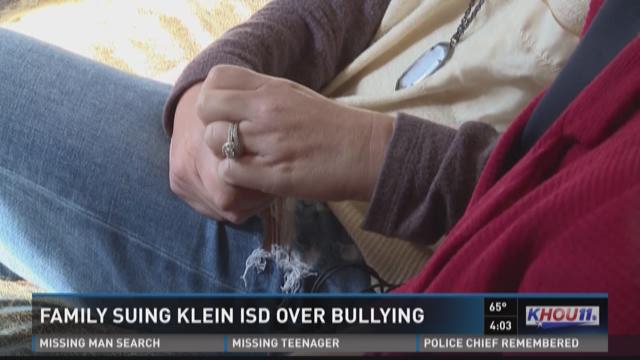 A family in Spring is taking Klein Independent School District to federal court. They claim the district did nothing to help their daughter who was allegedly bullied relentlessly for years.

The mother asked to remain anonymous to protect her child from further harassment.

The lawsuit claims one boy was particularly abusive.

“He called her a fat, stupid ‘b word’ every day. When they would make her cry, they would high five each other,” the girl’s mom said. “He pushed her down. He would slam her head into a wall as he walked by. It just never stopped.”

She says the physical and emotional harassment started when her daughter was in third grade.

She decided to pull both of her children out of KISD last year. Her daughter was in 8th grade at Hildebrandt Intermediate School at the time.

“I talked to vice principals, principals, anyone I could speak to who would listen to me. I tried to get them to step in and do anything,” the Spring mother said. “I was doing everything I could to assure her she wasn’t fat, she wasn’t stupid, that she was a beautiful girl, and that she had so much to offer the world. She would say, ‘You’re my mom, that’s what you have to believe. You have to think that’.”

The family’s attorney hopes legal action will lead to new school policies to protect other children.

“With the ‘Me Too’ movement and everything that’s going on today, I thinks important to think about how we got where we are. We need to start making these changes early. These young people, young boys, need to know this isn’t okay. If it’s okay at school, how are they not going to grow into men who think its okay as well,” said Holly Terrell, affiliated council for Cirkiel and Associates.

A spokesperson for Klein ISD released the following statement regarding the lawsuit Monday:

“Today, Klein ISD was made aware of a lawsuit filed against the District alleging that a former student was bullied while attending schools in our district. Klein ISD thoroughly investigated the allegations and found no evidence to substantiate bullying; however because a case has been filed, we cannot make any further comment directly related to this case. Klein ISD absolutely does not tolerate any form of bullying against our students, and we have proactive programs in place to prevent bullying from occurring on our campuses and to encourage students to speak up if they see something that looks like bullying.”