'She went for his shotgun': Suspects killed in shootout with Houston police identified

Who were Dennis Tuttle, 59, and Rhogena Nicholas, 58? The KHOU 11 Investigates Team did some digging. 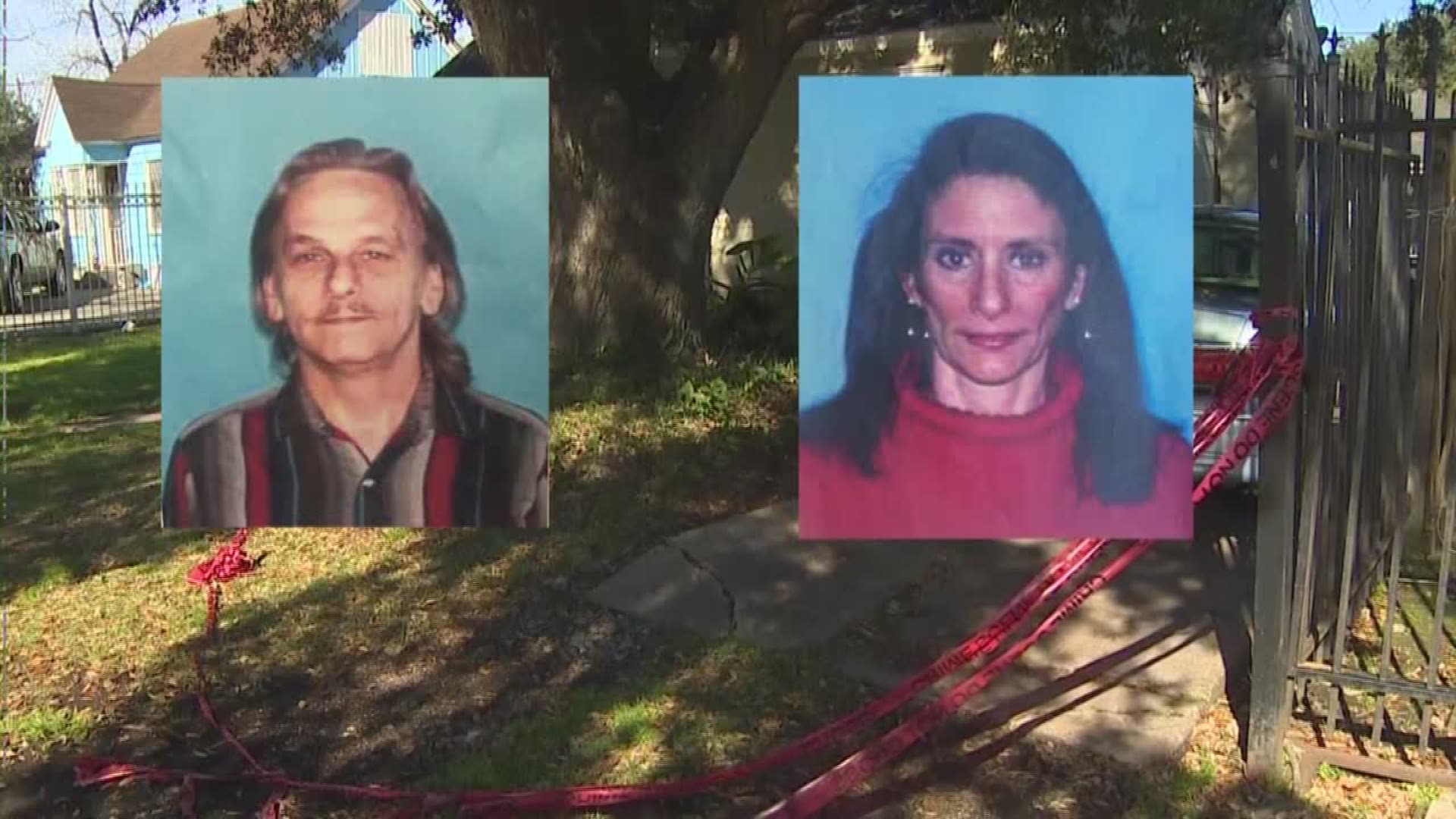 Harris County Clerk records show the married couple lived at the home where the shootout occurred for at least 20 years. Tuttle is listed as the home’s owner.

The KHOU 11 Investigates Team dug into both of their backgrounds and found Nicholas was in court 10 years ago over a “theft by check,” which is a misdemeanor. She paid the $145 she owed and that was the end of it. Tuttle appears to have no criminal record.

TIMELINE: Here's what happened before and during HPD shootout

Police tell KHOU 11 there was only one call for service at their home in the last six months, which was a search for a suspicious person with a weapon. That call was cleared after the officer found no evidence of a crime.

Tuttle's sister drove in from Dallas Tuesday and said she was shocked by the allegations against her brother.

Reality began to sink in when Elizabeth Ferrari saw the blown out windows and bullet holes in her brother's home.

Ferrari said Tuttle served in the Navy and she recently spoke with him.

"We had a great conversation last week," she said. "Just telling me he loved me and was proud of me. And I just shared with him that I loved him.

HPD Chief Acevedo gave an updated timeline of what happened when a team of officers went to serve a search warrant at the couple’s home in southeast Houston shortly before 5 p.m. Monday.

He said the narcotics officers, a group of 15, arrived at the home on Harding Street. Upon making entry, they “immediately came under fire.”

“The first officer through the door, armed with a shotgun, was charged immediately by a very large pit bull,” said Acevedo. “The officer discharged rounds, and we know the dog was struck and killed.”

At the same time, a male suspect identified as Tuttle, came from the back of the home and opened fire with a .357 Magnum revolver.

“That officer was struck in the shoulder. He went down, fell on the sofa in the living room, at which time a female suspect went towards that officer, reached over the officer and started making a move for his shotgun.” 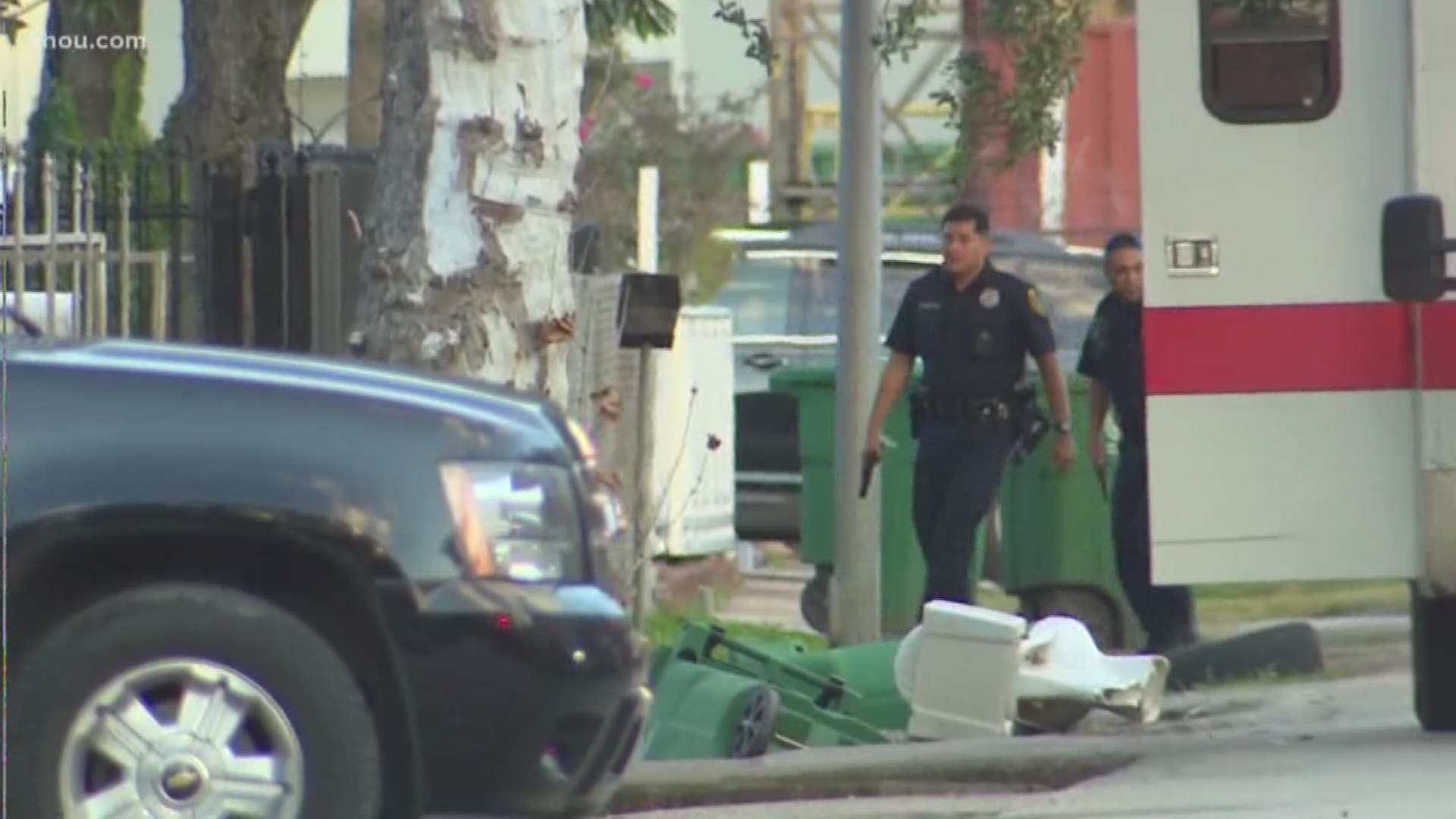 That’s when backup officers also made entry and opened fire, killing the female suspect. An exchange of gunfire continued with the male suspect.

Other officers laid down cover fire and they all “heroically pulled their fellow officers out of harm’s way.”

“And then we all know what happened between Life Flight, EMS, Houston police where we escorted everybody here either by ambulance or by helicopter,” said Acevedo.

“We use the word heroes all the time, but the doctors and nurses at this institution, the firefighters, everyone that was involved. The Life Flight, just, they are all heroes in our eyes, so we’re just very blessed,” said Acevedo. “Again, thank you.”

The exchange of gunfire was not captured on video, as Acevedo said officers do not wear body cameras when making entry while serving a warrant.

In all, five officers were hurt during the shootout. Four of them were shot, according to HPD. 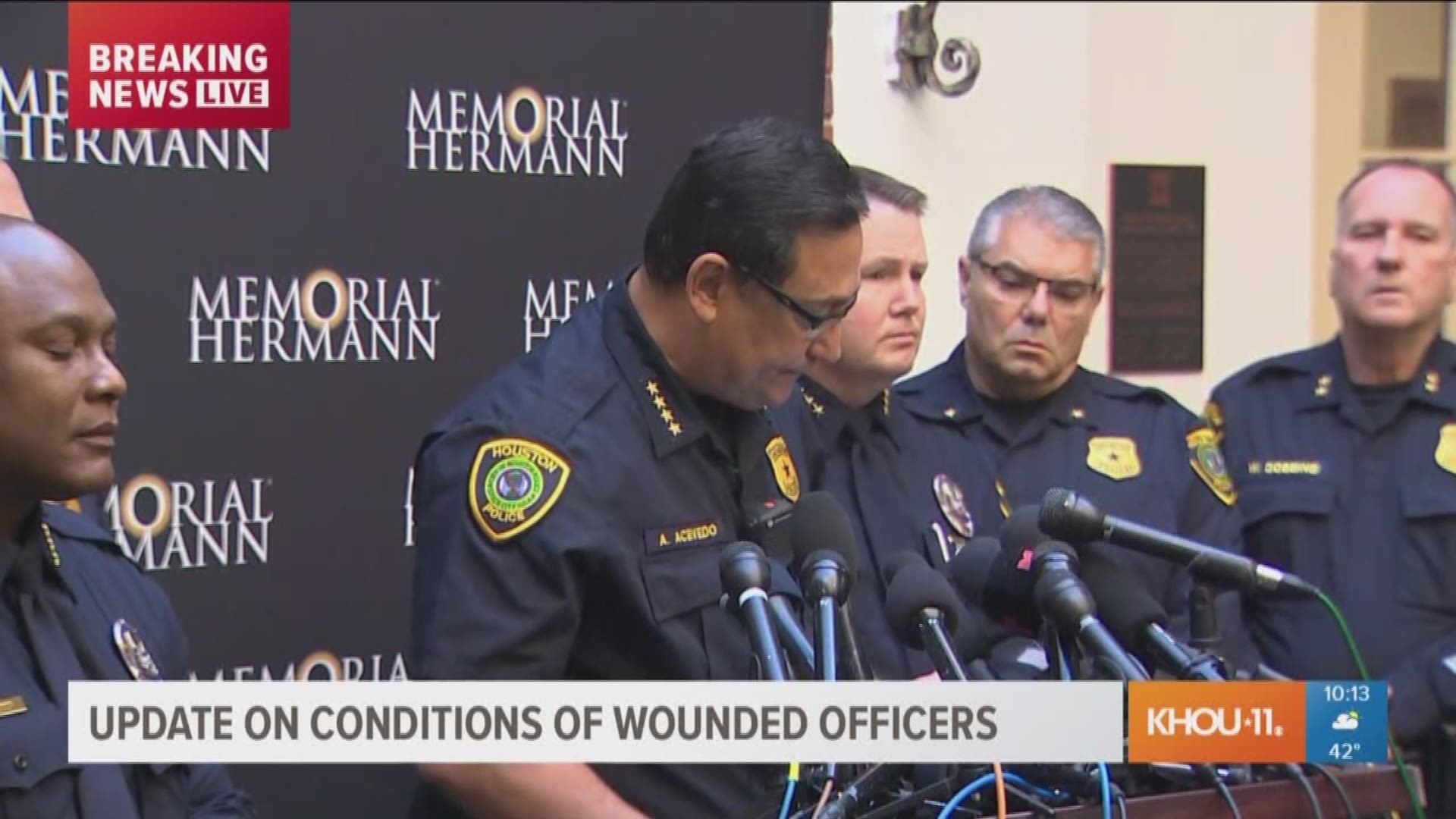 As of Tuesday, three officers remained in the hospital.

The team leader, a 54-year-old veteran officer,  remains in critical condition after he was shot in the face. Acevedo says he heroically made entry as backup, saying “I had to get in there, I knew my guys were down.”

RELATED: Houston officer critically wounded in shootout had been shot twice before in his career

A 40-year-old officer was also critically wounded when he was shot in the neck.

The chief said his family has asked for his medical condition to remain private at this time.

Another officer, a 50-year-old 27-year veteran sergeant, sustained a serious knee injury that required surgery. He remains in the hospital but should be discharged later this week.

Another 50-year-old officer shot in the face was released from Memorial Hermann Tuesday afternoon.

And a 33-year-old who was shot in the shoulder was released Monday night.