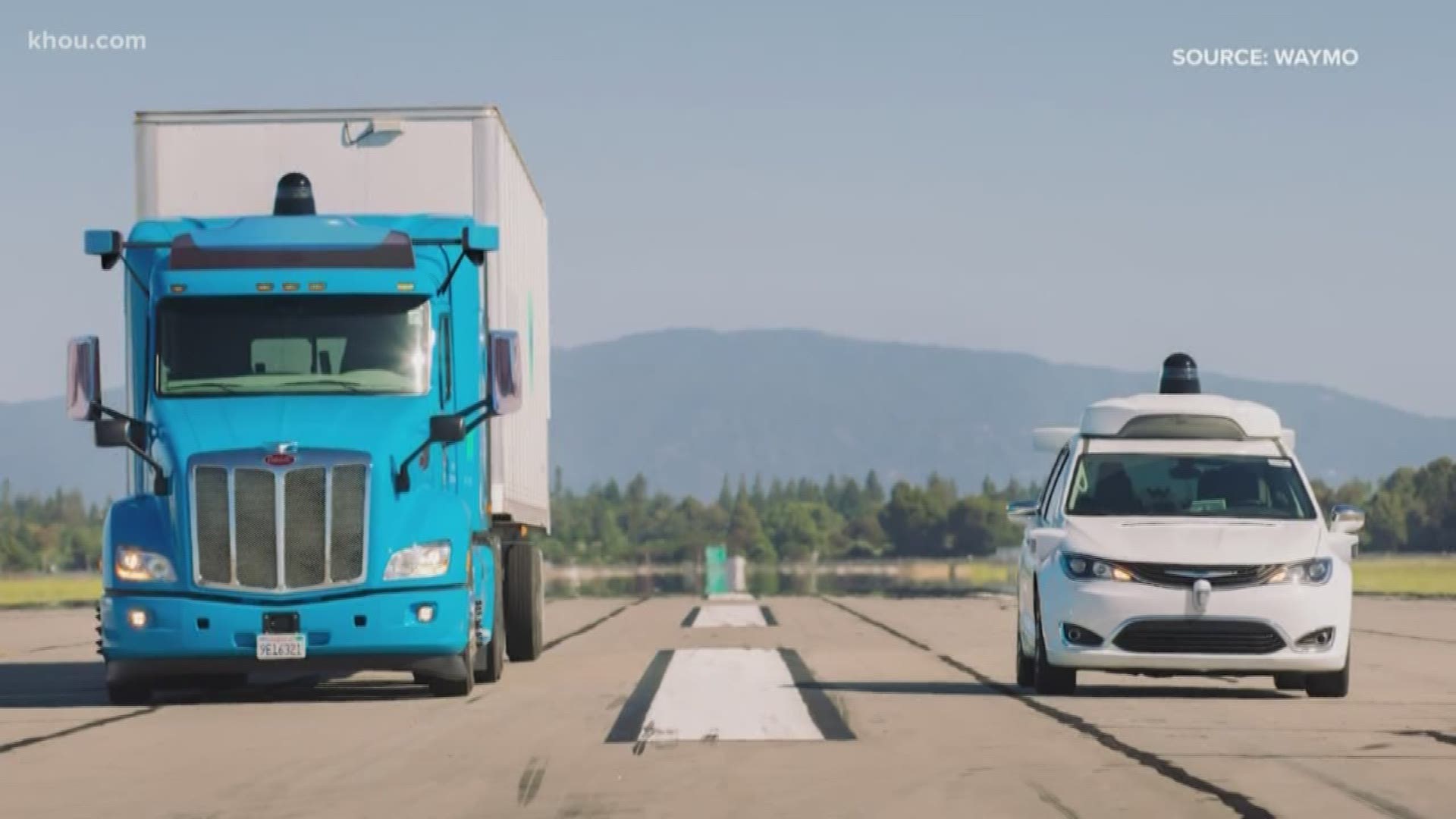 HOUSTON — If you commute on an interstate that cuts through the Houston area, do you think you would notice a self-driving big rig?

Waymo, which is the self-driving division of Google, announced Thursday that it's starting to drive its Chrysler Pacifica minivans and long-haul trucks in Texas and parts of New Mexico. The autonomous vehicles will be driving along Interstates 20, 10 and 45, mapping out potential commercial routes between the states while exploring if the tech company will be able to create new transportation options.

Waymo began developing self-driving technology in 2009 as part of the Google self-driving car project. A spokeswoman for the company says the project stemmed from a "huge potential to make roads safer and save lives."

"The future is coming, so adapt," said Alejandra Cid. She's a management consultant for AAA CDL School, which has been in Houston for 20 years.

She and her team of instructors and students are not worried about their jobs.

"Always, the human factor is something that is required," Cid said. "And by the way, let’s be honest. This is going to take a lot."

She's right. Waymo said the minivans will map Texas and New Mexico for the tractor-trailers. First, the Waymo vehicles are driven on public roads and collect information through sensors. That information is cleaned up and details are added to it -- like crosswalks, road edges, curb heights, boundary paint and intersections.

Then Waymo puts the newly-created map through quality control testing to ensure there are no errors. And lastly, we test our map on our vehicles. This process is the same no matter where we go and is also the same process we follow when updating our maps.

In an email, Waymo explained to KHOU, "these are not 'normal' maps in the way that most people think of them. The things that our cars care about are quite different than someone trying to find their way to a restaurant via Google Maps or Waze. For example, it’s far more important for us to know the speed limit of the road than the name of it. However, a human needs the name in order to navigate to their destination correctly."

"There’s always something we’re going to be doing to help them," Cid said. "We are the new Santas."

CDL drivers are in demand. Waymo says the reason it's eyeing Texas is that the state has a high freight volume and is a favorable environment for deploying autonomous vehicles.

Other companies need CDL carriers to help with immediate or next-day shipping as the demand for products bought online continues to soar.

"I mean, the demand for drivers is so high, regardless of whether or not you're actually controlling the wheel," Cid said.